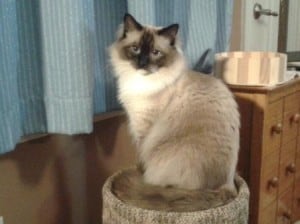 I have been fascinated by Ragdolls for several years now after reading about them in Cat Fancy and seeing them showcased on Cats 101.   About 2 months after I lost my Wrangler in August 11 I had noticed that one of the catteries I was looking at was having a 50% off sale for their older kittens, “Jack” was 7 months old.  I had seen the picture of “Jack” several times in the last month and just fell in love.  So I contacted them about adopting him and changed his name to Oliver.  I try to give my cats' names that are unique to each cat.  I wanted something a little more regal for my new fluffy kitty.   (The cattery Ollie came from is located in S. Carolina and I have since found some not so good things about them, including the fact the have operated under 6 different names since 2009.) 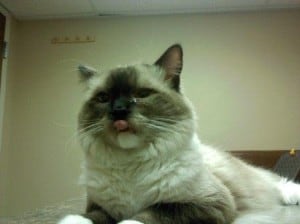 Oliver at the vet the day after I brought him home.

I picked him up at the airport on 11/11/11, I must say it was very weird going to the airport for a cat.  I noticed when I got him home that his left eye was weepy, after his vet visit the next day, he had what the vet thought at the time was an ear infection and an Upper Respiratory Infection.  After numerous vet visits over the next 2 1 /2 months for an ear infection that would not go away, my vet decided she wanted to investigate a little further.  He ended up having his ear scoped out and was found to have an ear polyp the size of a pea completely blocking his ear canal.  The surgeon said he would have had it for at least 7-8 months.  The  cattery was not helpful at all when I called to tell them about this.  He still to this day has problems with his eye, even though he has no signs of a polyp.  I will have to watch because there is a 50% chance it will return. 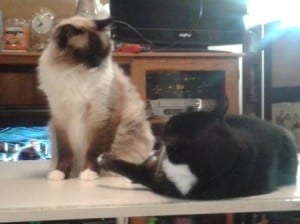 Despite all of the obstacles Ollie faced, he has been the sweetest cat, always loveable and giving head butts, it only took about 2 months to win over Phantom (4 ½) and Levi (2) however Dakota (9 ½) took a bit longer.   Ollie is a big flopper, but doesn't go limp when you hold him.  He does follow me everywhere and he will often “race” me to the bathroom to see who gets there first.  Ollie is also a very determined kitty ! !  If he wants something and doesn't get it when he thinks he should he will start getting into trouble, like getting on the counters and knocking things off or attacking one of the other cats.  He has turned my formally Alpha Cat, Phantom, into jello by just staring at him.  Ollie never swats at any other cat unless swatted at first and the best thing is he never uses his claws.  Ollie loves to jump on my cutting table and “help” me cut fabric and sew. 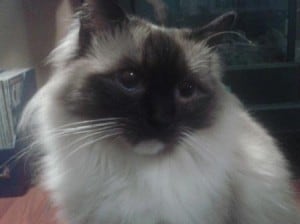 When he plays, he goes all out, his favorite toys are acorns and Cat Crazies and chases them from one end of the house to the other sliding all over the hardwood floors !  He is a character and thoroughly entertaining and I love watching him play! !   Ollie just got his formal name approved – it is  ElegantRags Prince Oliver V.  Ollie has been a great addition to the family and one day I will definitely get another Ragdoll ! ! 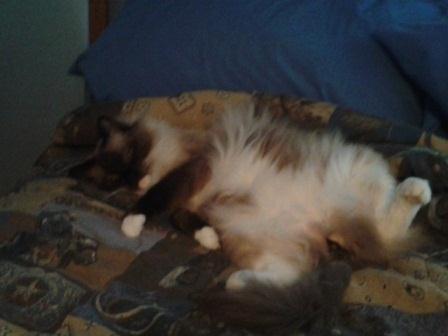 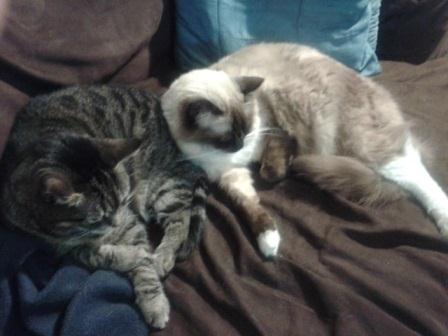 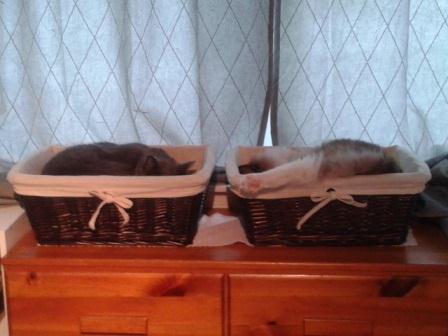