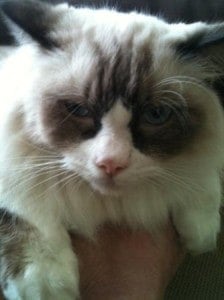 When I decided to get a cat four years ago, I knew I wanted the biggest and most loving cat possible. I also knew that if I bought a cat, I would adopt a rescued one as well.

I did my research and decided on a Ragdoll based on the physical and personality traits. Since Ragdoll breeders are not common in Singapore, I knew I had to be patient. I was adamant about not getting one from a pet shop since most of them looked “flu-ey”. My wait was short and I quickly contacted a breeder who had put up an advertisement in the local classifieds online.

I visited the breeder at his home and saw that he had a room dedicated to his king and queen cats. The litter he had was small – there were only 2 male kittens to choose from. I chose the less dominant of the 2 and brought him home a few weeks later. 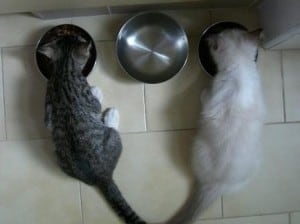 By the time Macky came home with me, I had already had Wally, my rescued DSH for a month. I was worried about them getting along so I tried to follow the recommendations I had read. At the beginning, Wally was the friendly one but Macky kept hissing and taking swipes at him. I played together with them and when I got impatient when they were not getting along, I would hug them both and rub them against each other to transfer each other’s scent. 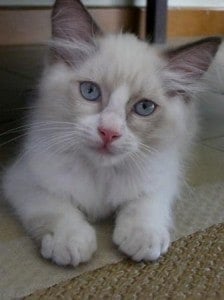 Thankfully, within a week they were getting along and hanging out together. Up to this day, it melts my heart when I see the two of them sleeping together or cleaning each other.

My pets have always had food names. Macky is short for Macadamia and Wally is short for Walnut. Macky sometimes gets called “Mac Mac” or “Fattycat”. I think Macky suits his name because of his coloring and also because he is a fairly big cat at 7 kg (15 lbs).

Macky will come running when he is called. He also understands “come” and “outside” when commanded. He is quite a love bug although he’s not really a lap cat per se. He does not like being carried or held like a baby and he will meow in protest when I do that. However, he will readily flop himself next to you and start purring. He loves chilling out with any human company. 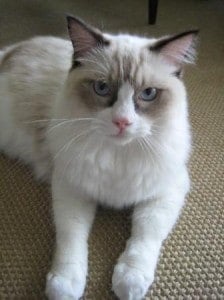 Macky follows me around the house like most Ragdolls. He will come trotting into the kitchen or toilet when I’m there. If I am taking a shower, he will plonk himself outside the shower stall and I can see his outline through the screen door. As soon as the shower screen door opens, he lets out a meow to let me know that he’s there. Then he proceeds to lick my feet dry with his raspy tongue. He absolutely detests water but makes it a point to lick up wet spots on the bathroom floor.

Unlike my other cat, Macky does not seem to care much for toys. He gets engaged with it initially but quickly loses interest and always appears as if he cannot be bothered with it any more. The only thing that gets him excited is his treats by Pounce. I toss them across the room so that he gets some exercise plus it’s also hilarious to see him scrambling for them like they are the most precious things on earth. 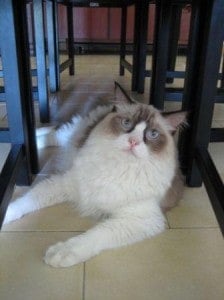 My friends have all commented that Macky is not a real cat because of his dog-like personality. I guess they have not met any other Ragdolls. I can’t imagine life without either of my cats and I am so glad I got a Ragdoll who loves hanging out with me! 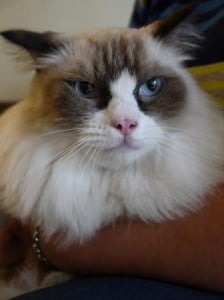