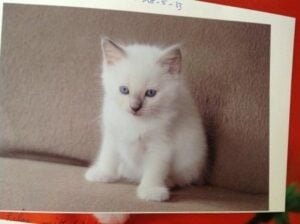 I’ve always loved cats. I immediately fell in love with the ragdoll when I was watching a show on Animal Planet about them. I was about 15 years old at the time, and couldn’t afford such a beauty. I nagged my parents for a cat ever since my grandpas 2 cats died when I was little. Last year my best friend passed away, and I needed a little friend to love, and to keep my mind off of things.. so I got a kitty from a shelter. She was a one year old stray cat called Cotty. She was my best friend but unfortunately she got hit by a car about 3 weeks ago.. The whole family was in grief. My parents immediately wanted to get a new cat, and when I heard them talking about getting an indoor cat, I suggested a Ragdoll, and showed them every Youtube video and picture I could find. I gave them all the information about why I loved the breed and they agreed that they are fabulous cats. I started looking online for catteries and found quite a lot of them. The next weekend I made an appointment to go look at Ragdoll kittens in a cattery. That night, me, my mom, my dad and grandma went over to the cattery and fell in love. They were very warm and welcoming people, not to mention they had 26 price winning Ragdolls! I originally wanted to get a little girl, since my previous cat was a girl. 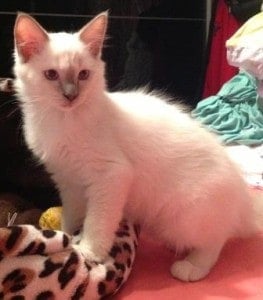 We asked if they had any kittens we could take home right away, and they handed me the sweetest, fluffiest little boy I had ever seen. I immediately fell in love and everyone agreed he would be our new member of the family. The  owners told us his name was Hanibal (All the kittens born that month got a name that starts with H) born on may 18th 2013 and he’s a lilac mitted little boy. His mom and dad even gave us some babyphotos off him.  If you’re from Belgium and looking for a good breeder, I definitely recommend Cattery BeverRagdoll.

We took him home and he slept in bed with me.

We’ve had him for 2 weeks now and he is absolutely the sweetest cat I have ever met. He still sleeps in bed with me every night, and I’m pretty sure it will stay that way. Every morning he wakes me up with his sweet, and pretty loud, purring when he cuddles up to me. He is very calm during the night, but once he wakes up he turns into a whirlwind! He loves running around chasing tinfoil balls, and pretty much anything that will roll.  If you want to see some of his mischief, visit his Youtube Channel.

He loves hiding under blankets and rolling around on the couch with his favorite toys.
And he loves taking selfies with my ipad! He is so curious, the least amount of movement triggers him to chase things.

We went to the vet a couple days ago, and she said he’s in perfect health. She also told us he’s gonna be a big boy, he already weighs  over 2kg at barely 4 months old!
He really loves these little mice we got at ikea that weren’t even meant for him. He even sleeps with them, but don’t tell anybody 😉 He also sleeps in the funniest positions, like cuddled up holding his own paws.
He is such a wonderful addition to our family, he is a very spoiled kitty who charms everyone with his big blue eyes. I hope you all love him as much as we do! 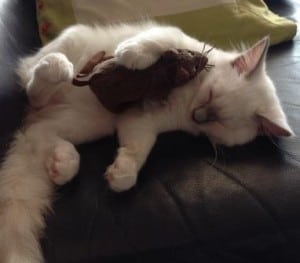 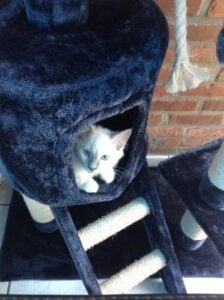 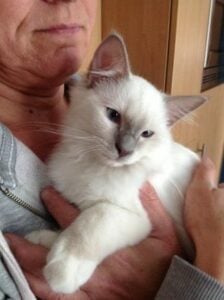 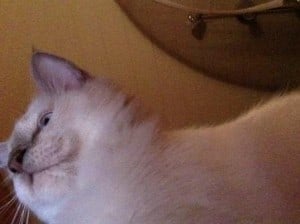 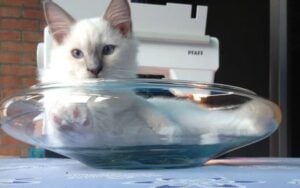 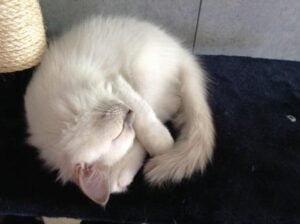 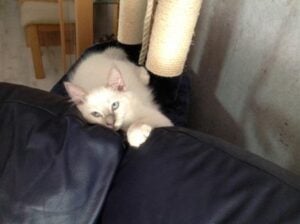 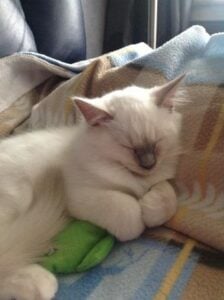 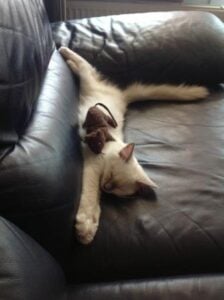