We became interested in Ragdolls through the internet where we read about their docile loving personalities and gorgeous appearance. I personally had only grown up with dogs and had also read they are very dog like in many ways. Sure enough this is very true.

Claus is a 1 year old Seal Point Mink male who is all attitude. His birthday is March 28th which is the same as his human mommy! We adopted him from a breeder on Long Island when he was 5 months old. He now lives a happy life in a Manhattan apartment.

We named him Claus because we thought it sounded proper and he has now gotten the nick name King Claus since he feels he owns the apartment.

He is the most affectionate cat I have ever met in my life. He "helps" with everything we do in the house. He watches you do dishes, brush your teeth and gets overly excited about making the bed or changing the sheets. Another one of his favorite activities is to go between the shower curtain and the liner to watch you shower. If you are in the tub he will also go behind the clear liner and punch at you through it like he is playing a game. He also enjoys stealing the shower drain out of the tub and playing with it. 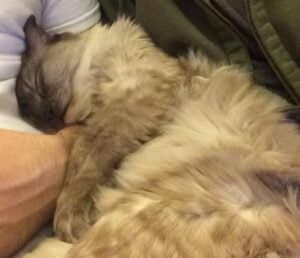 Claus enjoys his sleeping spots and sticks to them throughout the day. If he is not cuddling with us on the couch you will find him on the bed, on one of our barstools (that he is getting too big for) and lastly believe it or not the dish drying mat! He also enjoys getting into every single closet or cabinet that is opened. He loves both of our closets and if our sink cabinet is left open for more than 5 seconds he is usually already in there digging through all of the stuff.

Unlike most Ragdolls (as they say) he loves to talk. If he is not the center of attention or wants something he will make sure you know it. He runs to the door every day when we get home from work and greets us to tell us about his day. Claus also likes to yell at me to get out of bed in the morning to feed him. He is a very spoiled boy.

Claus loves his toys. I think the best thing we bought him was a five foot cat tunnel 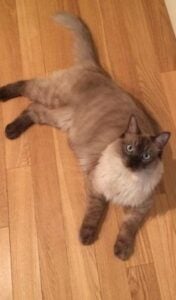 that sits in our living room. He will run up and down it, chase toys in it and sometimes even lay down to take a quick cat nap. He also enjoys his cat charmer which I tie a random toy to every day and he will chase it around the apartment. In addition to that he loves a good cardboard box or paper bag. He has been a great addition and at a year old weighs almost 12lbs and we look forward to him continuing to grow into a very big boy. 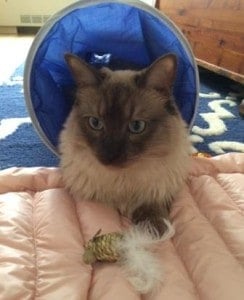