Evie - Ragdoll of the Week 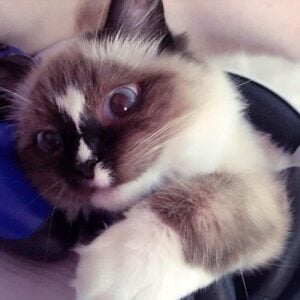 "No more video games. Pay attention to Evie." -Evie hogging my controller (she wanted some lovins.)

Hello! This darling little doll's name is Evie. I named her Evie because she sounds like an Eevee (the Pokemon) when she meows (which she does a lot.) I had to respell her name because her vets would always seem to pronounce her name wrong..):

Evie lives with me in New Hampshire and she just turned a year old on February 24th, 2016.

I got Evie on April 28th, 2015. My calico cat, Cleo, had passed away back in January 2015 and after a month since then I was on a search for a kitten. One of my friends mentioned getting a ragdoll. 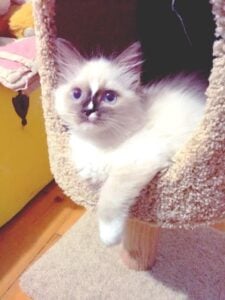 This is Evie's Kitty tree. It was a "Welcome Home" gift from my friend Kayla (her auntie KayKay)

I was a little confused. At first I thought she was talking about an actual doll, like a play thing. When I went to google the ragdoll breed, Floppycats was the first hit. Obviously I had to check it out.

From there I found the Floppycats YouTube channel and I watched every single video from the channel. Twice. I had fallen in love with the breed. I started searching around for breeders near by and I found Elvia's Ragdoll Babz. Elvia is a breeder in New Hampshire. She has gorgeous kittens and cats. I definintely recommend her. Be sure to check her webpage if you're looking for a ragdoll. Here's the link to her website.

Elvia was kind enough to send me a few pictures of Evie (Artemis was her name at the time) and I instantly fell in love. I made the payment for her and my friend and I went to pick her up on April 28th, that morning. I was so excited! 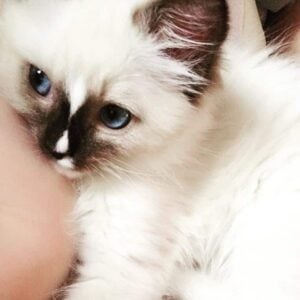 Falling asleep on the car ride home from the breeder's.

Evie loved the car ride. She liked looking out the window, a lot. When she wasn't exploring around in my lap, she was sleeping in it. She was so cute and tiny. :3

When we got home, she instantly wanted to explore the house. She had full access of all the rooms and closets. She immediately became friends with Oliver (my mom's yorkie) Dakoda (my dad's black german shepherd) and Kitsune (my shiba inu). She was also introduced to a toy called the Starchaser. She loved it. I have to replace the ball every couple of weeks just because she keeps losing them. It's okay though. As long as she uses them. For a while I would have to keep taking the ball out of the starchaser because she would use it in the middle of the night and wake everyone up.. other than that though, I'd say this was and still is her favorite toy. She also really loved her Squishy I bought her. Squishy is Evie's stuffed octopus that she sleeps with every night. I call it her Squishy because it first belonged to Kitsune, but she decided one day she was going to rip it open, take the squeaker out and destroy it. Luckily, I was able to save Squishy before she tore that apart too. Evie took a liking to it the night I had brought her home and it's been hers every since. 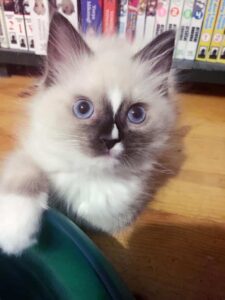 Evie and her Starchaser

Evie spends most of her free time sitting in my lap when I play video games. Other times, she's seen running around with Kitsune and some toy they're usually playing with (Kitsune's rope or Evie's bell ball) because they both share each other's toys. Evie's favorite thing is food. She's always waking me up in the morning just to remind me that it's feeding time. It gets a little annoying, but it's okay. She's way cuter than my alarm clock.
Her least favorite thing is baths... she needs baths because she likes to do this thing when I finish cleaning her litter box and all the new litter is in it and she rolls around in it.. I mean, I guess it could be worse. She could do it BEFORE I clean the litter box, right? Ew. aha 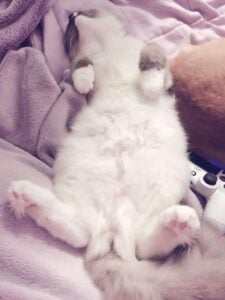 Evie is one big happy kitty(:

Evie is definitely a mischievous cat. My brother and his girlfriend like to come over a lot. They always bring their dogs with them. One of them Evie doesn't like, and it's not that the dog is mean to her or anything, it's just that the dog has never really seen or been around cats long enough to really know what they are. So, I would keep Evie upstairs in my bedroom (it's a pretty big room). If I ever leave her alone in the room, however, she'll get on top of my bureau (that has all of my 200+ bottles of perfume on it) and she'd meow, wait ten seconds and all you hear is "CRASH". She knocked a bottle off the bureau. Then she'd do it again. It's a repeated process until either I or Kitsune enter the room. I stopped leaving her in my room while my brother is here with his dogs. Instead, we had Annie and Oakley (my brother's dogs) introduced slowly to Evie. They're all really good friends now(:

Evie is a little bigger now. She's not exactly a kitten anymore, but not yet an adult. She's still just as playful as ever. She's not as mischievous as she was when she was younger, but that's okay. I love her no matter how much trouble she causes. She's always going to be my little doll. ♡ 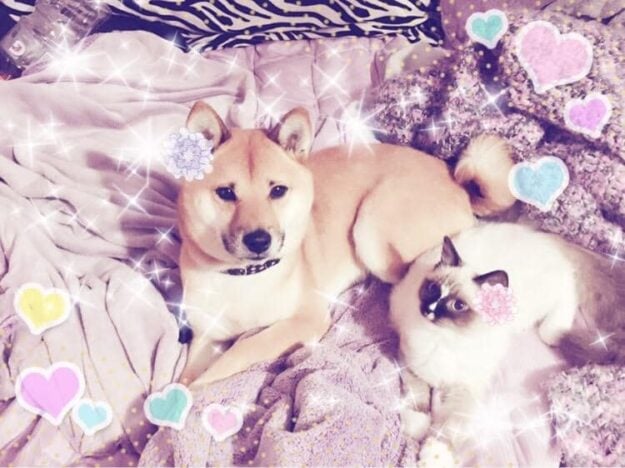