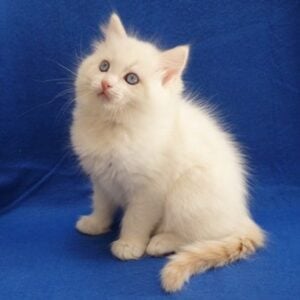 It had been 4 months since I lost my pussy cat that I had for 15 years - Bellamy. My home was empty without feline companionship, I missed my little man. I knew I would have to have a very special pussy cat come in to my life. Which was why I choose the breed Ragdoll. My search began. I googled Ragdolls Sunshine Coast QLD Australia and came up with Cherishme Ragdolls. I then sent Sharon Bailey an email telling her how beautiful her cats are and that one day I hope to own one. I particularly liked 'Arrow' a very handsome Blue Bicolor and I wanted one of his kittens. His first litter was all girls, I wanted a boy. Three months later Bombie was born 26th March 2012. He was the only boy in a litter of 5. I had to wait a week to see what colour he was going to be. If he was a blue bicolor he was going to a breeder. Lucky for both of us he turned out to be a cream bicolor. Arrow's registered name is Cherishme Up and Atom. I always wanted to call my kitten 'Bomb'. So to get his name I added Atom from Arrow and came up with Atom Bomb. 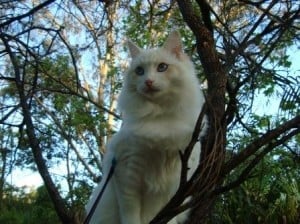 Two weeks before I was to bring him home my sister in law died unexpectantly. I had to go home and spend time with my family. When I finally got to pick him up I can remember feeling so guilty that I was taking him away from his family. When I got him home he went 'mmmmm' then went to sleep. When he woke he started playing and almost 12 months later he is still playing. He loves plastic spoons - carrying them around in his mouth, gets so excited when he finds one. My home is littered with cat toys. It was so hard to get a photo of him when he was little because he never stopped.

He is not much of a lap cat, he is far too busy. He loves going 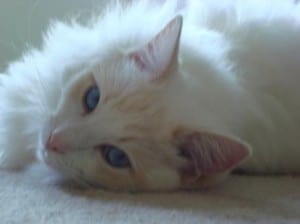 for walks on his leash in the garden and he even climbs trees.

Bombie has the most delightful nature. He is such a gentle boy. He has done everything I have asked of him and more. He had even mastered using the human toilet.

I highly recommend Cherishme Ragdolls.  Sharon raises the most beautiful kittens.  Bombie was so well socialised when I bought him home.  I am so lucky to have this lovely little boy in my life.  He is cherished. 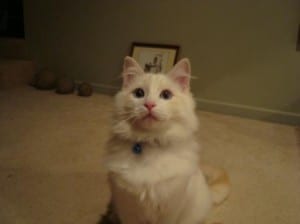 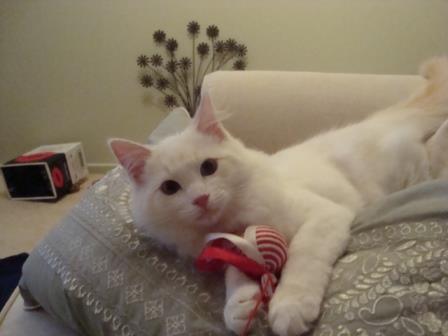