I have a 6 year old, not particularly social, Sealpoint Ragdoll already. I had been looking for another Ragdoll, a blue lynx specifically for a over a year. I found a wonderful breeder in Raleigh NC . I had been working with her for months but when the right kitten didn’t come along, I decided to wait. I was also considering a move at the time so the timing seemed best.  One day late August 2010,  I was browsing through breeder websites as I often did. I saw Taylor. and it was love at first sight . There was just something in his eyes that said “pick me” and I knew I had to have him. By September 1st all arrangements had been made and Taylor would be on his way.

Taylor arrived
September 18, 2011
He flew in from a breeder on the east coast in the midst of what turned out to be a tornado near La Guardia Airport. His flight was 6 hours late and by the time he arrived I was a wreck. Despite a long12 hours on the plane Taylor came through a little wet, but otherwise relatively unscathed. By the time we got home it was 2 AM but time didn’t have any meaning. Taylor was so happy to take all the love I could give. A love which knew no bounds for the 8 wonderful months he was on earth

From day one Taylor had the most infectious personality. He was a loving, bright, and curious little kitten.. totally devoted to me. He always woke me up in the morning, met me at the door when I came home and followed me all over the house. He had not quite become a lap cat per se, choosing instead to lie on the floor with his head on my feet. There was  only one place where Taylor loved to sit on my lap and that hilariously of all was in the bathroom!

Taylor brought such joy and laughter into my life. He was like a ray of sunshine and I couldn’t get home fast enough each day to see him..

Taylor had some abdominal problems when I first got him and as you can see, he liked to spread out his bloated little belly by the fireplace. The problem, with a change of food to Royal Canin and of his feeding schedule seemed to resolve. He fought his way through those early health issues or so we thought. Nonetheless, Taylor continued to thrive and to grow and was well on his way to becoming an extraordinary cat. 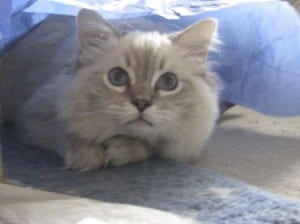 Taylor was both silly and playful and oh so funny. His #1 favorite toy was the Laser Bolt by Frolicat. Taylor never tired of chasing it and I appreciated the mirror deflection function so as not to damage little eyes. The next most popular toy was the Neko Flies although he was most inclined to jump on the bed and play with them there.

Da Bird came in a close third bit as with all cats you have to change it up to avoid boredom Interactive play was his thing. I rarely saw him engaged in self play during the daytime, but someone was up moving all the little ping pong and glow in the dark balls at night. Taylor loved anything he could put in his mouth and carry around. Qtips were quite the hit and he would bat them around for a bit and then carry them to the net play spot. Taylor also loved tissue paper. I would keep several pieces of it draped around the scratching post and inevitably by the end of the day the paper was all over the place. The minute Taylor heard me picking up the paper, he would barrel in from wherever he had been and run underneath it so I could wrap him up as “my little Christmas package” He just loved that.

Taylor’s favorite playtimes were 5AM and 12PM. What a wonderful way it was to start and finish my days. His favorite places were always the bed and his cat tree, both to play and to sleepTaylor was particularly fond of chasing hiss tail. He discovered it one day when he was turning around in the empty tub, another favorite place to play. Thereafter, no matter where he was he would endlessly try to catch that elusive little tail.

Taylor was extremely photogenic and I have hundreds of photos of him. The only problem was that he knew in an instant that I picked up the camera or cell phone and in most instances would turn around and disappear.

I am so thankful for these photos because one day I came home and Taylor didn’t meet me at the door. That was very strange and over the next two days I realized that something was terribly wrong. Taylor’s blood test came back positive for Coronavirus and in many cases as in Taylor’s, the virus mutates into FIP. After 10 days of aggressive treatment I brought Taylor home to spend his last days at home.

On Friday May 13, 2011 my precious Taylor lost his battle with the virus that had invaded his body. We were never able to definitively diagnose him with FIP as he did not live long enough for the Ultrasound and biopsy that would have confirmed the diagnosis..

I had been planning on writing a Cat of the Day article for months and now I do so to honor Taylor’s memory.. Peace my little baby. You were loved and forever be missed.

21 thoughts on “Taylor – Ragdoll of the Week”