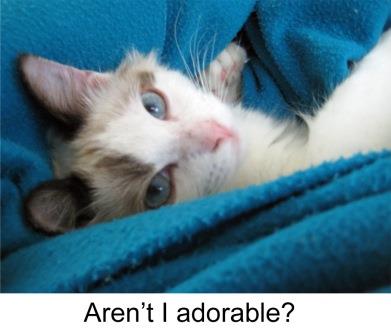 It is my pleasure to introduce you to Sophie, my beautiful seal bi-colour Ragdoll. Sophie was born in May 2007 and has had a very difficult life medically.  We (my husband, daughter and I) bought Sophie after our previous cat, Sarah, a blue-point Birman lost her battle after 11 years with severe food allergies. Our vet suggested a Ragdoll cat instead of another Birman as Ragdolls are renowned for their easy-going temperament and in many other respects are very similar to Birmans. I thought no other cat would be able to be as loving and beautiful as Sarah was, but Sophie is that and more! She is the most gentle and loving cat I have ever known and also the only cat I have been able to easily give tablets to!!! Just as well, as she requires 5 every day. 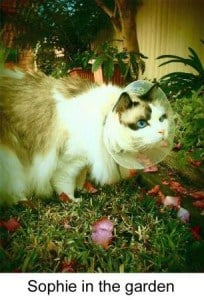 We bought Sophie from a breeder here in Sydney. Sophie chose me, rather than the other way around. When the breeder bought her out for me to look at her, I held Sophie and she immediately started purring and kneading with her paws. I was hooked. But, unfortunately, when I took Sophie to the vet it was discovered she had ringworm. Despite many attempts to eradicate the ringworm it took at least a year before it finally cleared up.  Our vet warned us that often cats who contract ringworm as kittens can end up having skin problems in later life – unfortunately this was the case with Sophie.  She started scratching and licking herself all over, but especially on the tummy which then, despite all the efforts of our vet, ended up developing bacterial infections. She looked terrible, like a wet, plucked chicken.

She was taken to a specialist animal dermatologist as a last resort and after a lot of specimens were taken and allergy testing done Sophie was diagnosed as having atopic dermatitis – she is allergic to airborne pollens. She is such a 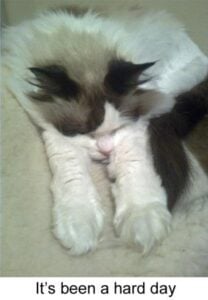 wonderful patient and endured a complete year wearing an e-collar which nearly drove us all mad. She had had the collar on and off previous to that when her allergies flared. And through all that she still loved us and wanted nothing more than to be in our company.

She is now collar-free (for the last 10 months) after she started taking Cyclosporin which is an immuno-suppressant – this has been the only thing that has worked to control the allergy so far and is our last resort. It has been a long, hard road to get Sophie to this point and she has been the most wonderful patient – she still follows me around the house like a puppy would despite the constant medication every day, applications of topical ointments, allergy injections over the years to try and de-sensitise her and many trips to the vet– she is my baby.

I have never known a cat to have such a beautiful temperament – I would not hesitate to get another Ragdoll despite the troubles we have had with Sophie (and the great expense!!).

We love her dearly. 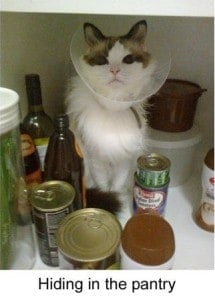 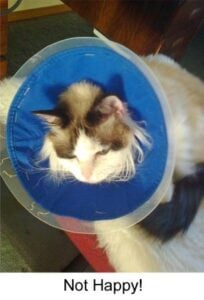 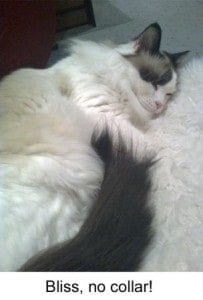