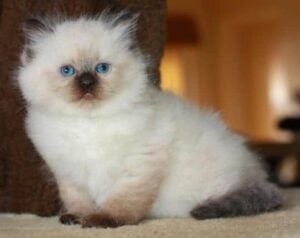 Hello all! This is Valentino, he is a seal point male from Ravera Ragdolls here in Australia, NSW. I wanted a pet for quite some time but always having lived in units and it was never an option as the landlords were always quite strict in keeping pets. I was never going to give up, my dream to have an animal to show unconditional love to was not going to be put on hold because of other people so that’s where my research began. After browsing the web for quite some time I came across ragdoll cats, I was captivated by their blue eyes, furry manes and laid back nature (how could anyone complain about that?) and not long after I found myself researching reputable breeders near by. This process went on for close to a year before I decided to settle on ravera ragdolls, the ragdolls looked adorable with big fluffy coats and lived in a little country town just south of sydney. I described my perfect ragdoll to the breeder and started my waiting process. On their website they have a ‘king’ by the name of Ollie, an import from another country who I totally fell in love with, I crossed my fingers and prayed that my future rag baby would be one of Ollie’s offspring. After another year of waiting my perfect baby came along, and sure enough he was one of Ollie’s boys! Valentino had a beautiful big coat, fluffier than any kitten I had ever seen and piercing blue eyes. I was in love, and so the wait began. It was an excruciatingly long 10 weeks before I was able to pick up my baby, most of which I spent buying numerous cat toys, food and scratchers. 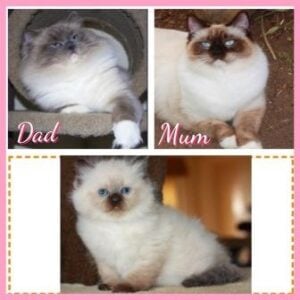 Finally the day was upon us, the day I went to pick up Valentino. I was so excited that I arrived half an hour early and as soon as Vera opened the door there he was, the only kitten amongst 10 others curled up in a little cat loaf at the front door. He was the first thing I saw and it was love at first sight, I prayed on the inside that he was mine, that it was that little kitty sitting there looking up at me and sure enough he was! As soon as Vera put him in my arms he began purring and turned into a complete flop. I cold feel how relaxed he was and he had no problem laying calmly in my arms as I did my awkward new-catlady grip (not to mention he smelt amazing). I struggled putting him in the pet carrier because I never wanted to put him down again but EVENTUALLY I did.

Upon getting home I expected Tino to run under the bed timid and scared and to my surprise he was neither if these things. He wanted everyone to hold him and kept giving everyone kisses and cuddling us all. I couldn’t even sleep that night because he wanted to constantly be touching me to the point that I couldn’t even turn in bed because he was right beside me, I would move him to the other corner of the bed and he would come right back up to me, start purring and settle under my arm.

A few weeks have passed and I love my Valentino just as much as the day I got him. It was a big wait but he is finally here and that’s all that counts. I highly recommend ravera ragdolls as their kittens display true ragdoll qualities in every aspect, aesthetically and in their amazing personalities. My Valentino loves his royal canin kitten food (chicken tenders) and his favourite toys are his petfusion cat scratcher lounge and da bird cat toy. You can find Valentino on Instagram under ‘valentinokitty’ if you would like to see the mischief he gets up to as well as his loving nature 🙂 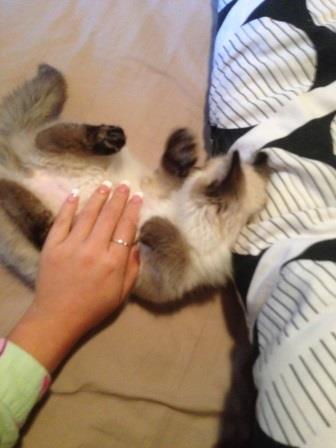 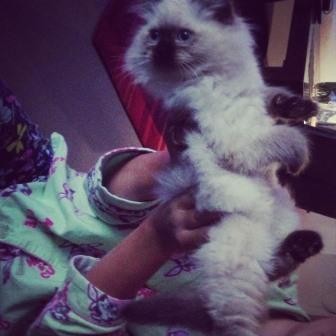 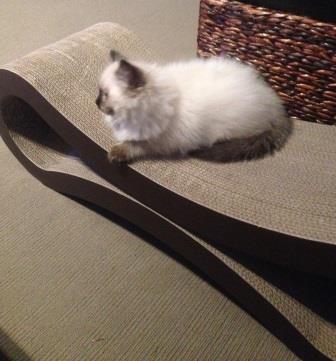 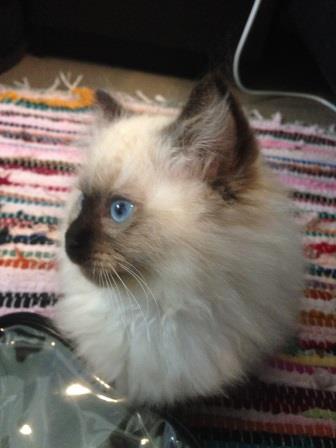 8 thoughts on “Valentino – Ragdoll Kitten of the Month”