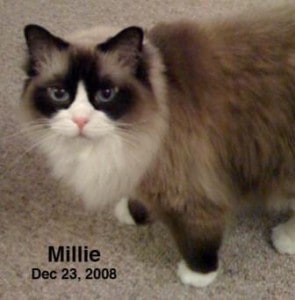 We got interested in a Ragdoll after we lost our first two kitties. They were each 16 when medical issues caught up with them, and we had to put them down. Hooligan was adopted from a neighbor; she was a psycho-cat that we kept only because we knew that she wouldn't be adoptable. After she grew up, she was only rarely pettable and scratched everyone, including my mother-in-law and the vet (where her card had DANGEROUS written across the top). We got Sam from a pet store because we thought that maybe he would calm Hooligan down. Sam was a sweetie, but he had congenital heart and kidney problems. What with replacing things around the house that Hooligan tore up and paying for Sam's hospitalizations and medical expenses, we decided that there was more than one way to pay for a cat and that we'd prefer to do that up-front.

So, when these two were gone, we looked for cat breeds that were (1) people-focused, (2) beautiful, and (3) not based on a genetic malformation, e.g. not a Munchkin, Scottish Fold, or Persian.
We think that Millie is gorgeous, but she's clearly a pet-grade Ragdoll. However, we chose her because we liked the Mitted markings, and I've always been a sucker for a cat with a white nose. 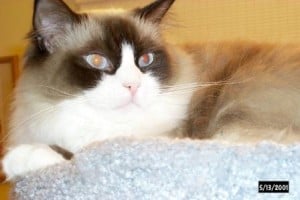 Her official name is something like Magnificent Millenium Millicent because she arrived just before New Years in 1999. Like Tyler, in the link you sent, she LOVES to chase paper balls, especially crinkly ones. She plays cat fetch, which means that she brings the balls out of hiding when she wants to play and then hides them again when tired. Like a dog, she seems to know the meaning of a pointed finger and will investigate behind furniture if we point out the location of an errant ball. Normally, Millie is more of an arm-length cat sitting where you can just manage to touch her nose with your finger but not reach the perfectly groomed fur to muss it up with a pet. However, if someone is sick, she cuddles close and will even diagnose an illness. If I wake up with a tickle in the throat and Millie at my side, I know I'm coming down with a cold. One of her quirks is that she likes to lick the adhesive off of envelopes. She also likes to crawl into open paper and laundry bags, file boxes, and suitcases when no one is looking. She's never gone on an unscheduled trip but has come close.

One of the funniest moments was the first time that Millie met a mouse seeking shelter from a frosty fall evening; she jumped onto a chair, and I swear said something that sounded a lot like "eek". With years came wisdom, and now she merely tracks any invading mouse with her nose, as if to say "look at this". Not that we get a lot of mice, but if we did, she would be useless because she's never shown aggression towards any living thing, a true Ragdoll personality. 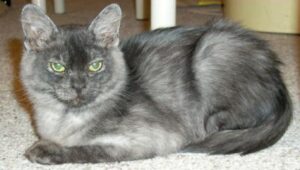 We got a Burmilla as our second cat. These are also laid-back cats; the breed is so new that the average lifespan isn't known, but it has to be in the high teens to twenties because I'm told that all the founder animals are still alive. Sundar is definitely a higher energy cat than Millie, but that was negotiable for us. We got him after we saw an article on Burmillas in a cat magazine. I can't believe that Burmillas aren't accepted in this country. Like Ragdolls, they're very "dog-like". Sundar (Burmilla) is so people-oriented that I'm sorry I haven't had time to try to train him to do tricks. I can get him to go wherever I want him to by holding up my hand; he then touches his nose to it. He's at least 90% praise-oriented; food only is important at dinner time. When I'm working at home, he'll crawl up into my arms while I type around him on the laptop. 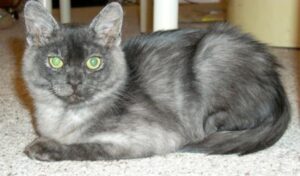 Burmillas are not recognized for show here in the US. We got Sundar from Strathkirk & Horizons cattery in Ontario, Canada where they are recognized. There's also a breeder (Sacred Spirit) here in the US. Quite frankly, Sundar is even floppier than Millie is and even more people-oriented. He's also pet quality, being longer than the show standard. The down side of a Burmilla is that they have an Asian cat-style yowl, which can be very insistent and isn't our favorite sound at 4 am. Sundar is super-smart and has figured out how to open cabinets and to push open doors that are ajar. If we're not careful, he will lock himself in the bathroom late at night, where he can stretch out on the bath mat and get nice and toasty warm from the heating register. Unfortunately, Sundar has NOT figured out how to turn the knob to let himself out when he's ready to leave, so we get an early wake-up call if we forget and leave the bathroom door ajar at bedtime.