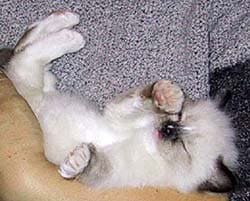 Jaska as a Kitten

I got Jaska (IC Snowrag Northern Lights) from my very dear breeder friend Sirpa, from the Snowrag cattery. My ragdoll boy Prince (IC&Pr Icedoll Snow Prince) and Sirpa's female Siiri (IC Starfire Snow Goddess) had a son together. And this boy Topi (EC Snowrag Secret Stormy night) is Jaska's father. And Siiri Jaska's grandmother is my first ragdoll King's (IP Ragtime King of Finland) granddaughter. So that is why Jaska is very dear to me. The Snowrag cattery website is at http://sirpa.magix.net/website/. I absolutely recommend the Snowrag cattery. 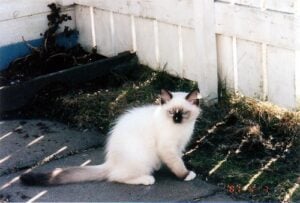 I have always liked big animals. Big dogs and horses etc. I read in books and magazines about a cat breed that was very large and had blue eyes and I got interested right away but we didn't have any Ragdolls in Finland at that time.

Then after many years of dreaming about Ragdolls I suddenly I finally saw a Ragdoll in our cat show.  It was in 1992. And it was love at first sight. I just had to get a cat like that. I found out that there were many ragdolls in Sweden so I went there to see some at a cat show.

Then I found out that they had started a Ragdoll club here in Finland and with the help of those people I found my first Ragdoll King from England. 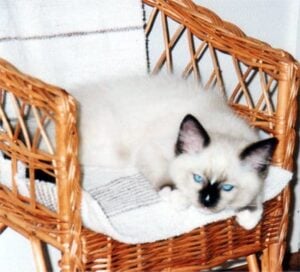 Jaska as a kitten

After that came Prince and then Jaska. Jaska is 9 years old now. A very sweet cat, very shy and d doesn’t trust any strangers until he gets really well acquainted.
Jaska has lovely blue eyes. And a beautiful blaze on his nose. At first Prince tried to remove it. He thought it was dirt. Now we all are used to it and we think it’s very charming.

Jaska's white gloves are not very effective here in the country but Jaska washes them in the drinking water. And that’s how he keeps them white. 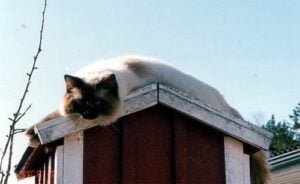 The thing that Jaska loves to do the most is sitting out in the garden when it rains. He loves it. When he hears the rain, he just goes to the door and wants to go out. He has such a thick coat that he doesn’t get wet to the bottom, and he just sits and enjoys the rain. When he comes inside I have to dry him with a towel and he purrs and purrs and purrs. Silly cat. Aren't cats supposed to hate water! 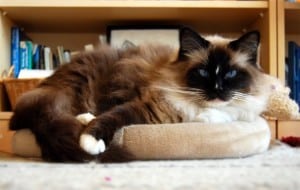 Jaska was called Jason in at the cattery but we made it more Finnish and called him Jaska. That is a Finnish man’s name. Jaska in snow in Finland 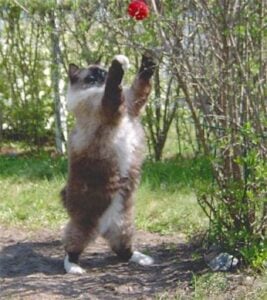 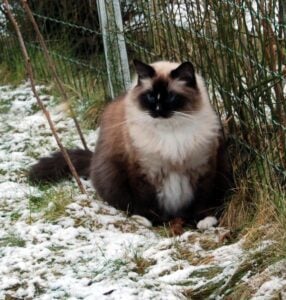