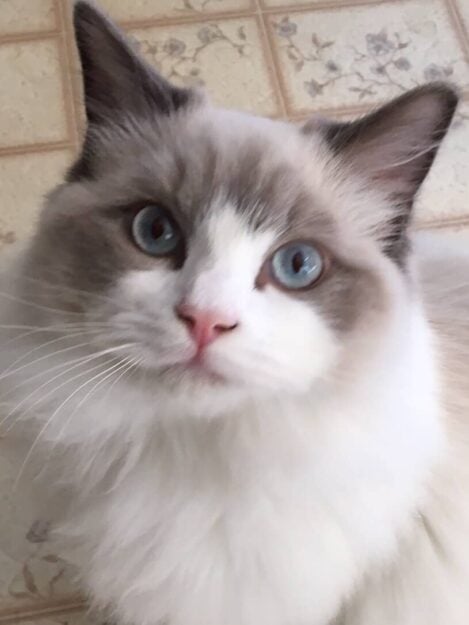 I love cats, but had not had one since my Himalayan, Holly, went to heaven 10 years ago. Family situations prevented having the time for one. Then three years ago, my sister and my granddaughter both got Ragdoll kittens and I fell in love with pictures of them and occasional visits with them. Until my family situations were resolved, I researched them, watched videos of them, and signed up with Jenny’s Floppycats.com and absorbed all her information, videos and advice. 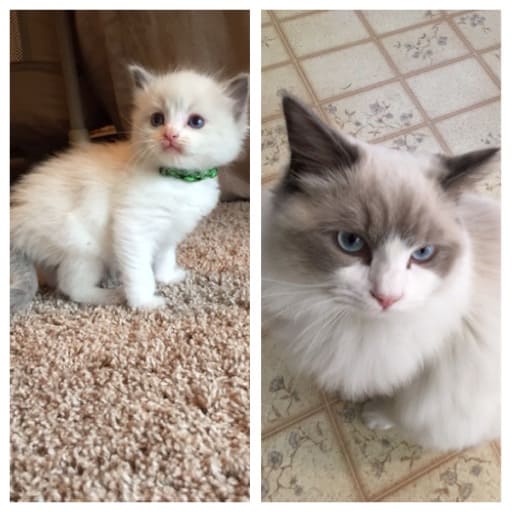 In 2015, I was finally in a position to get my own Ragdoll. I contacted a breeder in Gainesville, GA called Heaven’s Ragdolls. The owner raises them in her home with her daughters and a dog, so the kittens are well socialized. She had several litters of kittens coming in December of 2015. I specifically wanted a blue bicolor female kitten. Well, out of three litters, she had no female in that color. She did have a male. My Charlie was born December 22, 2015. Before I got him, I got Jenny’s Kitten handbook and read it over and over. I also fell in love with the name of one of her cats, Charlie. When my Charlie was 9 weeks old, the breeder brought him down closer to my home in Marietta, GA with some other kittens she was delivering then. We were so happy to finally get him. We have an upstairs two room guest bathroom we turned into Charlie’s rooms. He stayed in there his first night with all the comforts he could possibly want. It is still his room at night as we put him in there before we go to bed. I hooked him on Jenny’s recommendation of Whole Life Turkey Treats to get him in the room each night. He only gets them at bedtime. I let him smell them in my hand and say “treat, treat” and he follows me up to his room and I put them in his food dish and close the door. 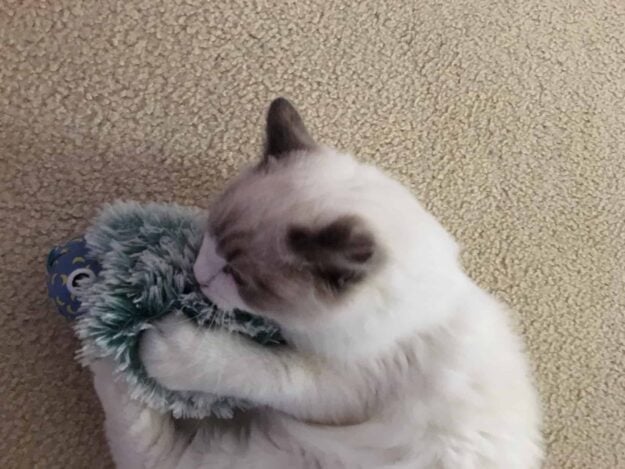 Charlie was a happy and energetic kitten, but had one bad habit. He wanted to bite us any time our hands or feet got close. I had read all the literature about not playing with him with your hands to prevent him from thinking our hands were something to play with and bite on. I made sure no one played with him with anything but wand toys, lasers or interactive toys, not hands. It took quite a while till almost a year old to break him of that habit. I read later that if kittens stay with their litter mates until 12 weeks, they may learn to not bite from being taught by the other kittens. It made me wish I had not gotten him at 9 weeks old. 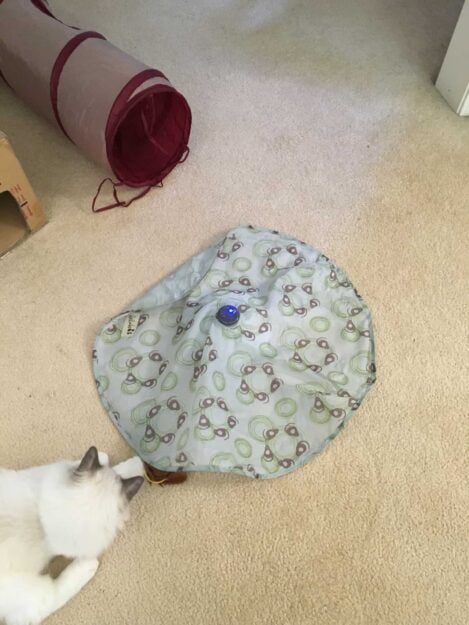 As a kitten he loved to play. I think he would have rather played than eat at that time. I kind of went a little crazy buying him toys. He loved a battery operated toy that had the feather under a cloth that he would try to catch. Soon though he would not play with it unless my husband or I were watching. He did that with any automated toy. It reminded me of a kid saying, “Watch me. Mommy!” Early on I bought a toy called a Cuddle bug. It was about 7 inches long oval shaped like a bug with chenille pieces for hair. He loved holding it and kicking it and carrying it around. He will bring it in his mouth from room to room and throw it up in the air and catch it. As an adult cat he still loves it. He loves all the feather wand toys too. I’ve bought several. Most were recommended by Jenny on Floppycats. The ones he likes lately are the Go Cat Catcher that has a mouse like fuzzy shape at the end and the Bird Catcher Pro. But the very latest entertainment of interest to him is the WooPet! Window Bird Feeder. Jenny’s recommendations are wonderful, and I find them on Amazon. I bought it two weeks ago and he stays at the window looking for the birds. We have many different kinds in Georgia that come, but if they see Charlie, they stay away. He has learned to hunker down real low to try to fool them. 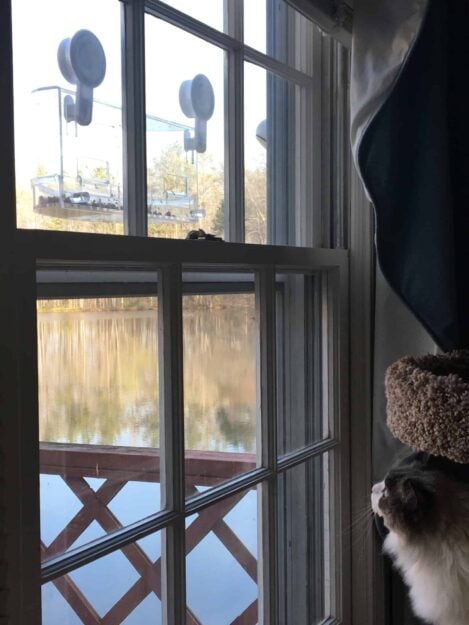 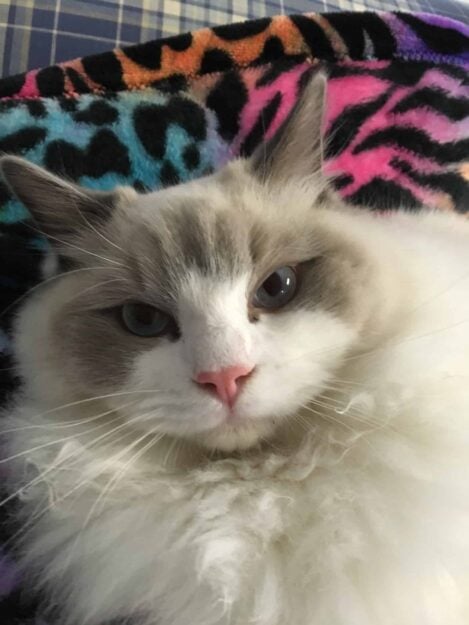 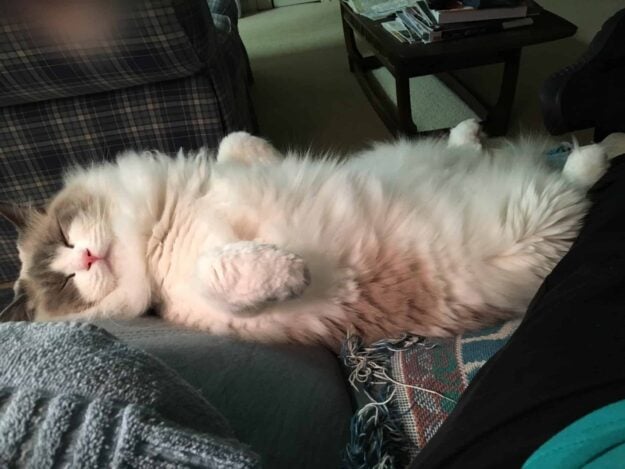 When we first got him we fed him Royal Cannin for kittens dry food and Fancy Feast turkey kitten wet food that our breeder was feeding him. He was fed this until he was a year old. Some articles I have read have been recommending grain free food, and I was trying to go that route lately. I’m a little confused now as Charlie just had a checkup at the vet today and since he weighed 13.4 lbs., the vet said he is overweight. The vet also said that it is not necessary to put him on grain free food. This is strange that he would say that. He wants me to cut back on Charlie’s dry food. While he is in his room all night, he had been allowed to eat all the dry food he wants. I guess I will now have to limit how much he has. He does not get much dry food at all in the day time, only a half can of the wet Fancy Feast. 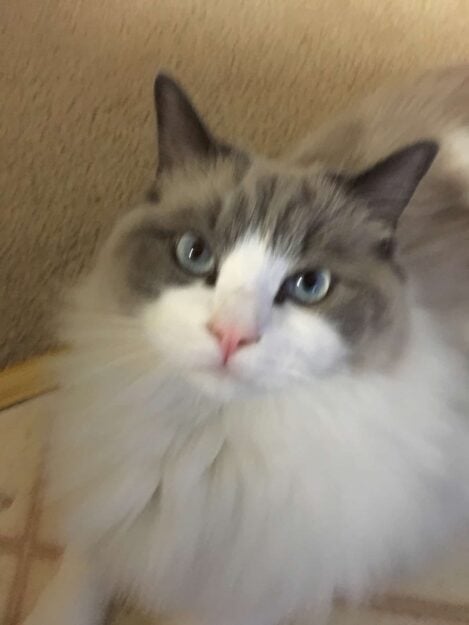 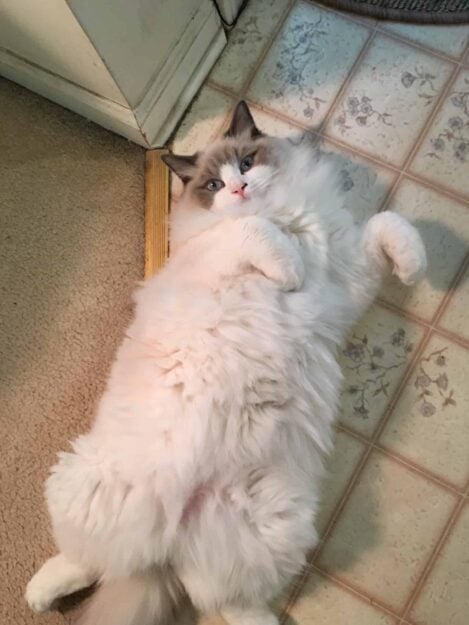 Charlie is sort of different in his likes and dislikes according to what other cats like and do. He does not like catnip, but loves adhesive, which I keep away from him. As a kitten, he kneaded soft things and purred a lot, now does not knead at all and purrs very infrequently. He does not meow much and it is very quiet. He does not rub up against you, nor butt head you. The only thing he does to show his favor of you is to lay his paw on your foot, lay on his back right in the very path where you have to walk, and follow you around wherever you go. He is definitely one of a kind! 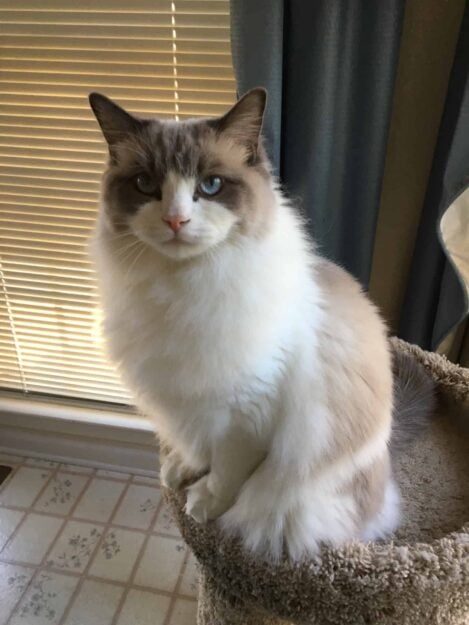 6 thoughts on “Charlie – Ragdoll of the Week”