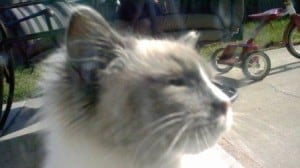 London, a blue point Ragdoll Mix, is the "big baby" of the household. He is currently 8 months old and full of energy. He was born, October 5th 2009 behind our couch, along with 2 brothers and 2 sisters.

(His mother is black with long hair with a tiny white spot on her chest. She got out one day and came back pregnant. After the kittens were born we started seeing this Ragdoll hanging around who looked like 3 of the kittens: London, Diego, and Buddy (runt).  Buddy was born a shorthair though. So we assumed he was their father.) 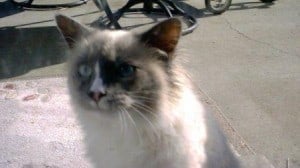 His other 2 brothers look the same as him except the one we called "Buddy" who was a short haired runt. The other one was bigger than him, his name was Diego (My 4-year old brother named him.) His two sisters were different though. His sister Bella, was a black tuxedo kitten and his other sister was a grey puffed out tux kitty. His mother is a fluffy black cat with a white spot placed on her chest and another spot on her belly. Her name is Chloe. She escaped the house in August and due to hard times we couldn't get her fixed in the first place. 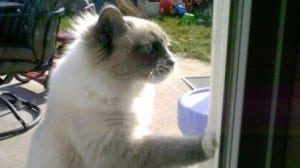 London tends to be a little piggy. He loves that canned Friskies food.  We give them 1 can a night. When I open the top he hops up onto the counter and tries to eat from it. I end up taking him off the counter and telling him he's being a cheater. He will meow until the end of time just for some canned food. 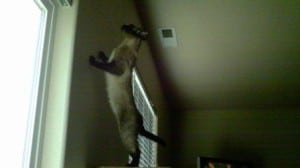 He's also naughty in other ways, when my mom is cutting chicken for dinner she will turn to go grab something and he will jump onto the counter and try to eat it.  He also likes to attack my cat Sophie,  a siamese mix that was rescued off the streets of Lebanon, Oregon. He will pounce on her, bite her, and chase her everywhere. Sophie is a year old and London is about 2 times bigger than her even though hes 6 months old.

I own a guinea pig aswell, Hershey, and London will stick his paws in between the bars of the cage and swat at him. 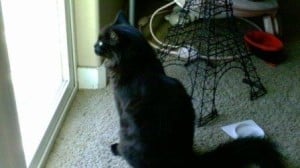 He loves being outside. He runs around, pounces on tiny bugs, and cuddles with his mom on one of our patio chairs. most of the photos are outside ones. When he's ready to come back inside he will stand on his hind legs and scratch at the corner between the sliding door and wall. Somedays he just runs in and out of the house for an hour.

His eyes are simply amazing. they are light blue, and intense. I love them! I have never seen eyes like his, especially when his pupils are small and you can see how amazing his eyes are.

Recently at my uncle's Easter party I saw his brother (the runt) again. He has grown A LOT. He has a raccoon looking mask and his points are darker. He's also grown much bigger than London which amazed me.

My little sister Caitlin loves London.  She even started saying London right after saying Mama. It sounds like "Nonin" but you can tell shes saying his name! London is still growing and learning things as time goes on. He is also still growing bigger and fluffier.One day he'll probably be just a big ol' puff ball that wanders around our house and sleeps on the couch. I can't wait to see him fully grown.

Check out this video of London on YouTube when he was a baby!