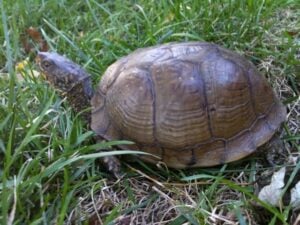 About two weeks ago, I was out in my backyard with Charlie and Trigg - letting them run around before I started my day.  Our routine is usually that I get home from yoga, make my breakfast (which is usually a vitamin shake) and then got Harney & Sons Hot Cinammon Spice Tea (best freakin' tea on the planet) and then we go outside for about 45 minutes.

I won't leave the cats alone out there, so I usually bring my iPhone to go through my morning emails.

I noticed that the neighbor's dog was really interested in something in the back corner of the yard - the neighbor's dog can run along the back side of my fence.  Maddie, the dog, is a sweet one, so I knew she'd allow me to check out what she was into.

Turned out to be a turtle!  I actually thought it was a tortoise for about 10 days because I have never ever seen a native turtle in my yard or in the city - in the 31 years that I have lived in Kansas City.  So I took some photos of it and then took a video and posted it on YouTube to see if anyone knew what she was.  Here's the video: 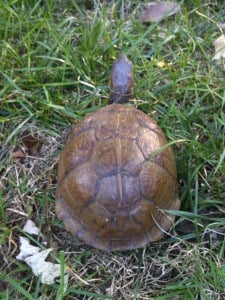 Sorry for all the giggling in the video - but Trigg is hilarious when it comes to things that are foreign to him.

If you look at photos before you read content, like I do, then you already know that I figured out it was not a tortoise, but a turtle!  I contacted Lakeside Nature Centerin Kansas City (a facility close to the Zoo) and asked for their help in identifying this little girl.  Here's what Rick Kupronis, a volunteer at Lakeside Nature Center reported:

"Normally box turtles have a fairly domed shell and wrists that move on their legs (as opposed to a true tort that basically walks around like an elephant). In this part of the country we have 3 toed and ornate box turtles. Ornate's have a very neat shell with black and yellow markings and their skin coloring in males is normally a yellow/green color and are found more in the open grasslands and prairies. 3toed are a little more drab on their shell coloration although young ones can have some markings that look like ornates. They have more reds and oranges found on them and are often found more in woodlands. Usually they have 3 toes on their rear legs. Males are much prettier in both species. Be careful when doing internet searches to find out what it is because often times box turtles are mislabeled in pictures. If you stick with a state website (either Missouri Department of Conservation or Kansas Parks and Wildlife) you should be good. Box turtles have a very limited home range so moving them isn't always the best option for them. They spend their whole life in an area about the size of a football field or two (~2-3 acres) and they seem to know the area very well. I would suggest leaving the little guy alone for a few days and if your still worried about him making it we can give you some options for overwintering it. " 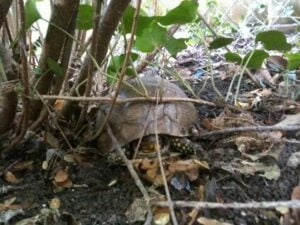 Then after he saw the photos, he said, "That is a middle aged 3-toed box turtle. She is probably around 10-15 years old. You can tell she is a female by the lack of coloration in her eyes and her rather large size. You can tell the age because in turtles grow kind of like rings in the center trees. They develop rings in the top of their shell as they grow. In really old animals these wear off over time and they are completely smooth. Box turtles take about 7 years to reach maturity (and she certainly is full grown!). More then likely she was just out basking for a little while on a nice day. With the weather only getting into the low 70's in the day you probably won't see her out again until around April or May of next year."

I haven't seen her since last week.  I am assuming she is hibernating for winter now.  The photo to the left is the last one I took.  I am really hoping she is still in my yard and that I have the pleasure of seeing her again!  I love turtles!