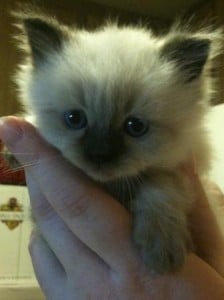 Hi!  Our kitten is named Toffee and she is a lovely seal point ragdoll.  She was born on October 15th, 2011 and I met her when she was only four weeks old.  She was so mellow and pretty and had the most beautiful blue eyes.  I knew she would be the perfect kitten for our family.The lady from whom we adopted Toffee was actually pregnant herself and ready to have her first baby, so Toffee came to our home shortly after that first meeting -- when she was only 6 weeks old!Toffee was a wee little fluff-ball when I brought her home.  We were so worried about how little she was that we completely kitten proofed the house -- or so we thought!  Within 5 minutes of coming into the laundry room, which was going to be her "safe area" for a few days, Toffee managed to find a little tiny hole underneath a cabinet leading to a perfectly kitten-sized crawlspace in the wall!!! 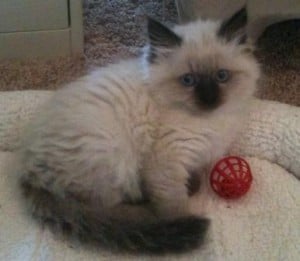 Did I mention that I have never had a kitten before?  So when I saw Toffee squeeze up into the hole and out of sight, I screamed for my husband to come pull her out, which he did quite easily.  After that, we made sure to seal up that hole!Fortunately, that was the only trick Toffee played on us.  She was an angel after that.  She never cried at night, started eating her new food right away, and immediately used her brand new Omega Paw "roll and clean" litter box -- which I highly recommend because it is so easy to clean.  Toffee also liked her SmartCat Ultimate scratching post from the start because it is quite tall and fun to climb.  She even let us give her a bath with hardly any fuss.  What a terrific kitten! 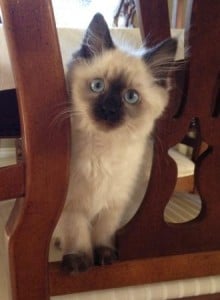 She quickly became part of the family.  For her first Christmas, we ordered her a lovely monogrammed knitted stocking and hung it on the mantle along with all of ours.  It was fun to see that Santa stuffed Toffee's stocking with some cute jingle ball toys.Toffee immediately bonded with our two daughters.  Toffee was actually a gift to our older daughter for being a great student and a wonderful big sister.  She spent hours with Toffee every day when Toffee first came home and Toffee still loves hanging out with her.  They are great friends.  And it was my older daughter who named Toffee, after my husband's favorite candy.Toffee is popular, too.  My neighbor brought her three young sons to meet Toffee when she first arrived and they all enjoyed petting her soft, bunny-like fur.  The boys asked their mom if they could adopt a Ragdoll, too.  Perhaps someday, they will! 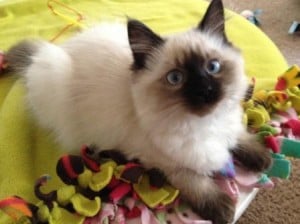 Toffee really enjoys playing with her Hartz "Gone Fishin'" cat toy.  It is a soft little fishy on a string at the end of a stick.  She also like wrestling with a little unicorn plushie toy.  When my daughters play, Toffee is always nearby.  But at the end of the day, she likes to relax next to me . . . or bat at my husband's feet!Toffee is 5 months old now and has grown quite a bit already.  She is very photogenic and doesn't mind having her picture taken.  But I think the best thing about Toffee is her sweet temperament.  She is a lovely kitten and she has been a terrific addition to our family. 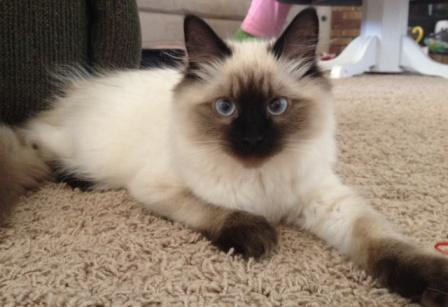