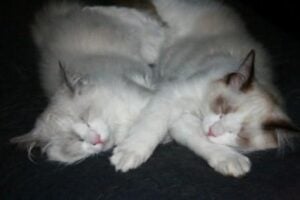 How a REALLY BAD DAY ended in a REALLY GOOD DECISION.

Welcome to Planet Hartwell.   Stress Capital of the known universe.  Please check your blood pressure at the door and make yourself a Panadol sandwich.

They say that God never sends you anything you can’t handle,  but sometimes even the best of us (and I’m so not one of them) need a helping hand.

Meet Achilles and Hektor,  furry guardian angels and purveyers of peace at Planet Hartwell.   I know this is supposed to be RAGDOLL of the week, not RAGDOLLS, but bear with me a moment and you’ll understand why they’re in this together. 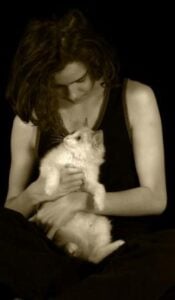 This is Firstborn.  He’s 16.  He’s a senior in High School, works part time, is a keen learner driver and mad skill gamer.   He  has Aspergers Syndrome, complete with OTT stress levels, a hair trigger emotional thermometer and a mad desire for order in a chaotic universe.   And this is Hektor.  Named for the Prince of Troy, ‘cos that’s how we roll.   He’s just turned 1.   He’s a blue bicolour who enjoys eating, sleeping, shedding and specialises in stress management and unsolicited displays of adoration. 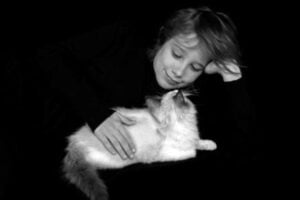 This is Firstborn’s  brother, Second Son.  He’s 12.  He’s a senior in Primary School, plays a wicked drum kit,  and enjoys epic battle movies without too much meaningful dialogue.  He also has Aspergers ,  with different manifestations and triggers.    This is Hektor’s  brother, Achilles.  Named for the Greek hero who built the Trojan Horse (and kicked Hektor’s butt).  He’s also just turned 1.   You get that in a litter.   He’s a seal bicolour who excels at climbing the unclimbable,  catching the uncatchable,  (and leaving the remains on my pillow….NOT cool) and wicked loud purring and skull cracking headbutts (and kicking Hektors butt). 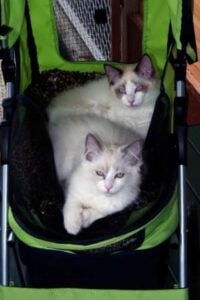 The boys in their Catmobile

Get the picture now??   I could no more pick one of my furrboys over the other than I could pick one of my sons.   They’re a set…..like my boys.   When it was suggested to us that we try Ragdoll cats as therapy for my sons, my first thought was  “OMG do I really want to add more work, more stress, and more responsibility to every day??” .    Followed by “and what if it doesn’t work”.

Fortunately, as you can tell from the pictures, it did work.  From the second they arrived from Ravera Ragdoll Cats.   As for the stress?? There is none.  They’re teflon coated stress repellers.  It’s scientifically impossible to raise your blood pressure with 13 pounds of centrally heated smooch on your lap.   And the work??  It’s not work.   Doing things for the ones you love isn’t work.  It’s a privilege.  Whether they’re your kids or your cats.     And they give it back to us times infinity.   Again, and again, and again.