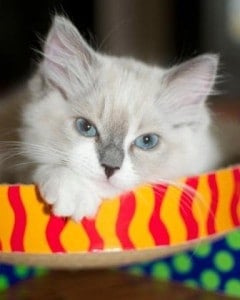 This story begins because my love, Halley Mae, a longhaired calico, passed away on April 1, 2013 from cancer.  Needless to say, my entire family (extended included) was completely heartbroken.  I think I’ve only ever been that sad when my dad passed away and my daughter, who was a preemie, was very sick.  Our Halley Mae was a rescue that had obviously not been taken care of prior to coming to me.  We loved her for over 12 years, and made sure she was treated as the princess she was.

After her passing, we IMMEDIATELY started looking for a new baby to bring into our home.  We still had Precious, a tuxedo kitty, and Buddy, our Chihuahua / Terrier mix, who was 16 years old.  While we were on our search another tragedy struck!  Buddy passed away on May 7, 2013.  We knew he had been sick, but honestly, one can never prepare themselves for such a tragedy.  Two babies in nearly a month – just gone.  We were just devastated, but it made our search for a new baby even that much more important. 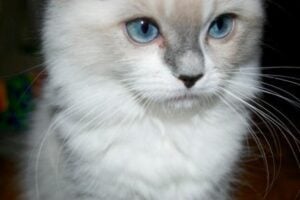 Queue the happy section of this story!!  I went on a massive search for the perfect Ragdoll breeder.  My distant cousin had a Ragdoll cat and from the moment I learned of her stories I knew that one day I had to have one!  I found a couple of breeders in my area (central Florida – East coast) but I just never clicked with any of them.  They seemed to be all business and nothing else.  They didn’t want to tell me anything about their babies except for their cost and what they came with.  I then learned of TICA through your website (among many other things) and found a breeder in Tampa, Florida, which is about 2.5 hours from me, who was registered with TICA. 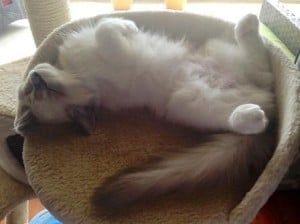 I reached out to her and was very happy to see her response, which was asking me all about who we were and why we were interested in one of her babies.  We exchanged a few emails before she agreed that we would be great parents to one of her babies.  Misty’s Ragdolls in Tampa, Florida is amazing.  She answered questions for us, one after the other.  She replied with in depth answers and offered many suggestions for introducing our new baby to our resident kitty.  The only unfortunate part was that we were number 11 on her list because her babies were so sought after!  We immediately placed a deposit and decided that we would just sit and wait. 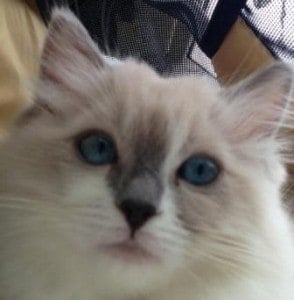 Imagine our surprise when in early July I got an email advising that she had a baby available for us!!!!  She said that her liter had already been spoken for but one girl hadn’t been chosen so she would be available at the end of August if we were interested.  I believe my exact response was “OMG – YES!!!”  

Fast forward through the longest nearly two months of our entire lives and ***drum roll please*** - meet Roxi Blu!!!  =) She was born on May  28, 2013, and is nearly 16 weeks old.  She LOVES to FLOP!!!  She also loves to play in her “bowl” and in her little cardboard house.  She’s DEFINITELY not quiet, as I’d read she may be – but her little meow is just gorgeous.    She resided in her safe room 100% of the time for the first week, but she was SOOO ready to come out!  She would cry at the door anytime someone wasn’t in there.  We slept in there for another week, but after that she’s just roamed the house.  Our resident cat still isn’t very fond of her, but I think they are learning how to co-exist. I’m not sure they’re ever going to be BFF’s which is really sad, but they definitely aren’t hurting each other – so we’re okay with their status at this moment. 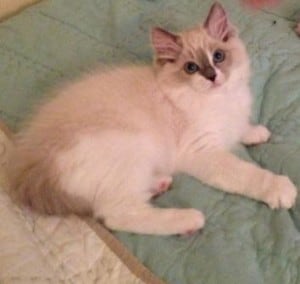 So – what does Roxi love to do?  Literally climb the walls.  She’s not yet learned that she isn’t a bird. HA!  She loves to climb the walls for absolutely no reason at all – other than to make us laugh.  She likes to puff up and hop all around and run through the house like a mad kitty.  We love it!  It’s Kitty Olympics 24/7 in our house.  She loves playing with the fly toys, the Burgan Scratcher, and most of all her kitty tree.  Even when she sleeps, her little legs are constantly moving.  Speaking of sleeping – she loves to snuggle at night.  She crawls all over us and purrs at max capacity until she can get buried into the sheets in our bed.  So sweet!!! She’s been such a joy.  I swear I had no idea what I was missing without her in our lives. 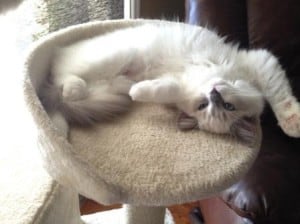 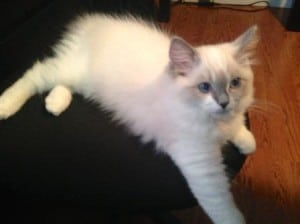 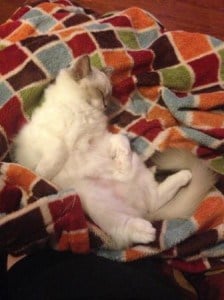 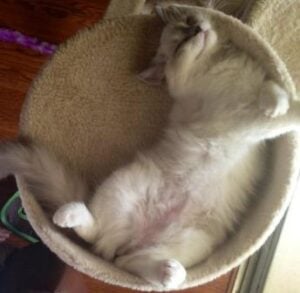 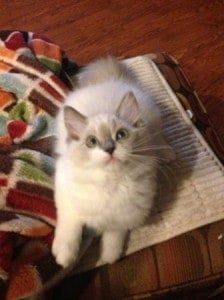 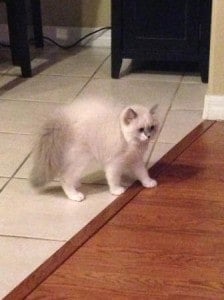 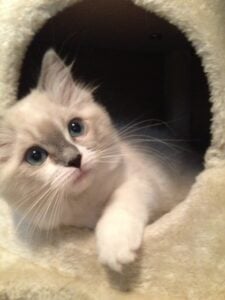 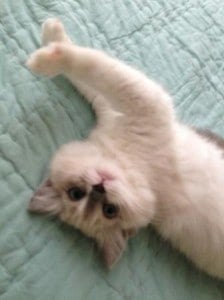 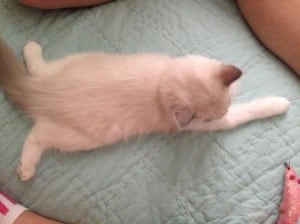