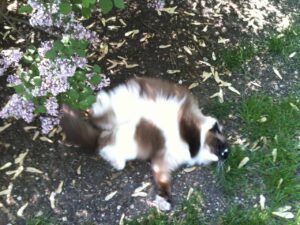 Charlie rolling around in the dirt

When I lived in Albuquerque, my boyfriend's cat at the time loved to go outside and roll in the dirt.  I thought it was pretty gross at the time because she came in the house with all this dirt on her.  Sorta like PigPen from Charlie Brown.

When I let Rags outside for the last 4 years of his life, he didn't roll around at all outside.  My parents' Ragdoll cats, Caymus and Murphy, roll around but only on my parents' patio - and they do it on my patio if they come over here too.  However, Charlie and Trigg are both dirt rollers.  This is also the reason I need flea control, I am guessing.  Although I am learning that flea control also has to do with what your kitty eats - more on that later when I have finished my research on it. 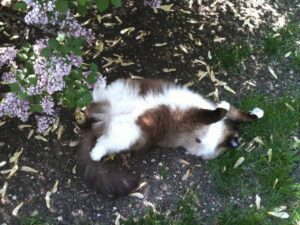 Charlie rolling around in the dirt

Of course, for your kitty to be a dirt roller, then more than likely you let her or him outside...so there will be exceptions here, I have no doubt.

I am curious to know if this is normal Ragdoll cat behavior or not.  Does anyone know why they do it?  I have heard it's so that they will musk their own scent or something.