I became interested in Ragdolls several years ago when my Husband and I were looking for a new feline member of our home. We agreed that it had to be something unique, something special, something that stands out, yet something that we could love and cherish. We found that in Jenny Dean's Ragdolls Charlie and Chiggy. I remember the very first video we had ever seen was of Jenny showing how to hold a ragdoll. The size, the coloration, the personality of the Ragdoll fit everything we were looking for in a kitty for our home and lifestyle. We became obsessed. We started watching one after another after another of Jenny's videos, trying to learn everything we could about this breed. We researched the history of the Ragdoll, any health issues, their personalities as well as interpersonal relationships between cat and Guardian.

My Husband and I both agreed this had to be the cat for us. Everything about the Ragdoll suited us to a tee! Then we started researching Breeders. We had found several breeders within Canada, and only a small few within Ontario (where we lived). Well to make a long story short, my first Ragdoll, Rochelle was a gift from my Husband. Then a few months later, I found Charlie at the same Breeder where Jenny had acquired Charlie and Trigg. A year later, I felt that Rochelle (now 4 years old) needed a little "Girl Power" as Charlie seemed to be a little too rambunctious at times with Rochelle, and I thought if she had another female around, it might slow Charlie down a little. So, I sent in my deposit, fully expecting to have to wait at least a year for our new addition to the Family. Lora Tesh of Soulmate Ragdolls, contacted me within 3 months with a few options. The first being a super sweet and cute looking baby called Rosey. It was love at first sight! She was worried I might not like her little mismark on her forehead, but I loved it! I loved her uniqueness! I contacted Lora right away and told her I had to have her. The fact that her Name was Rosey (after my Husbands mother's name) was the lock that set it all into motion. 3 months later, I took a flight from Canada to North Carolina USA and picked up baby Rosey on July 15th. She was 13 weeks at the time. 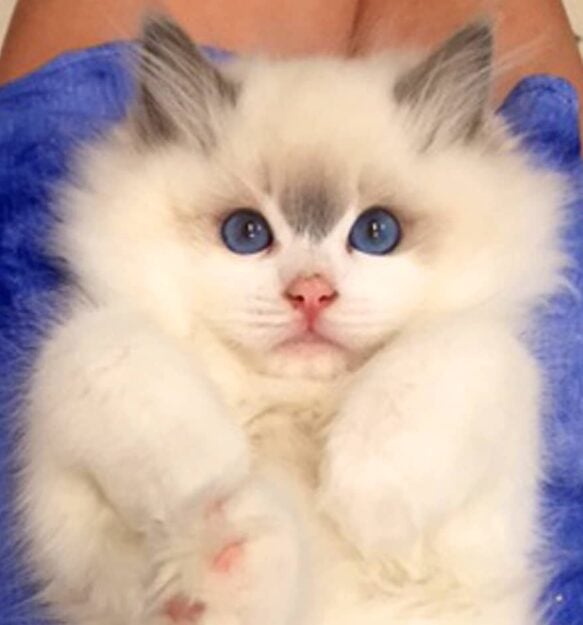 So far (it has been 3 weeks since she has been home) she has forged a bond with Charlie like no other I have ever seen. She is Charlie's half sister (they have the same mother), and he treats her like the little Princess she is. He spends hours a day playing with her, grooming and bathing her. I thought her and Rochelle would have had the super quick bond, but I was wrong. Rochelle loves her and bathes her, but Rosey and Charlie are attached at the hip. Where you find one, you will always find the other. One thing I find super cute is that they all sleep together. Always within a few feet of each other. Rosey is a little bit of a wild cat. She loves to challenge herself and she is trying something new every day. We updated our YouTube Channel from "Rochelle and Charlie" to "Rochelle, Charlie and Rosey". She loves to explore and she seems unafraid of anything, so she has been a great hit with her YouTube followers. Rosey is currently on Babycat Royal Canin food. This is the same food I gave Charlie when he was a baby. Once she gets older I plan to introduce her to Ziwipeak and Weruva. (Charlie loves it and they are very healthy foods for them to be eating.) If I were to recommend toys based on Rosey, I would say that anything that is Human-kitty interactive have become her favourites. Wand toys have been great, but if you are going to purchase balls and mice, please make sure you play interactively with your kitty. Don't just give them a toy and expect them to be happy with it. They need just as much human interaction as they need food. Please don't deprive any Family member of your very loving interactions.I look forward to a long and enriched life with Rosey, Charlie and Rochelle Do you have a Ragdoll Kitten or Cat?  Consider submitting your kitty!  Ragdoll of the Week submission guidelinesRead more Ragdoll Kitten of the Month submissions.