Floppycats.com asked Karen Craft, a pet talker, to answer some questions we had about animal communication as well as questions about her services. Thank you, Karen, for the interview.Karen Craft is located in Des Moines, Iowa and can be reached through her website: http://www.animalshaman.com/Answers are Copyright of Karen Craft.1. How long have you been communicating with animals?Because I told my sister about a couple of times I thought I heard the family cat give me a message, she insisted that I’m “one of those people who can talk to animals.” She encouraged me to take classes where I learned that everyone has the innate capacity for telepathic communication with animals (though it may come more easily to some people). My breakthrough in hearing animals occurred early in 1999; I’ve been a part-time professional communicator since then and full-time for the past four years.2. How does one communicate with animals?Telepathic communication is an exchange of energy. Quieting your mind through practices such as meditation helps you tune into the animals’ energy. Being completely present in the moment is a must: that’s where the animals live. They don’t obsess on the past or fret about the future.The information can come as emotions, mental images and/or sounds, or scents. When the connection is strong, the energy translates into words so you can have a conversation with your animal companion with the communicator acting as translator. 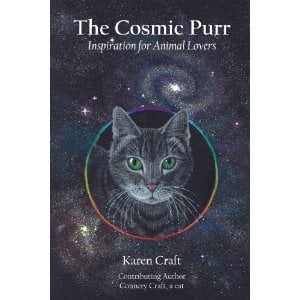 3. Can you share with us, one of your favorite animal communication stories? How it impacted the owner or the animal or both?It’s hard to choose a single story! Many of my experiences are described in my book The Cosmic Purr: Inspiration for Animal Lovers

. The contributing author is my personal companion cat, Connery, plus lots of input from my beloved Siberian husky, Angel. It was Connery who persuaded me to write the book—he says he wants humans to be more aware of all the miracles around them. Here’s one of my favorite examples of animal communication, which is included in the book:"A family brought a small black mutt to meet me at one of my pet supply store appearances. They told me his name was Corky and they were deciding whether to adopt him from the local humane society. As I chatted with the people, Corky wandered around on the large table where I was sitting. I said, “OK, what would you like to ask Corky?” and the mother said, “Well, we just want to know if we should adopt him.” Instantly, Corky zeroed in on me, walking right up to my face. Quoting from The Cosmic Purr: He looked me in the eye and I heard him say, “Tell them…to take me…home.” He spoke slowly and with great emphasis, as though to an inattentive kindergartner. I repressed a chuckle, and just shrugged and said, “He says you should take him home.”Instantly, Corky was transformed into a delighted, dancing, wagging display of canine exuberance, frantically licking my face. We all laughed out loud as he dashed from one child to another, kissing each of them. It was as plain to the family as it was to me that I’d gotten his message loud and clear." 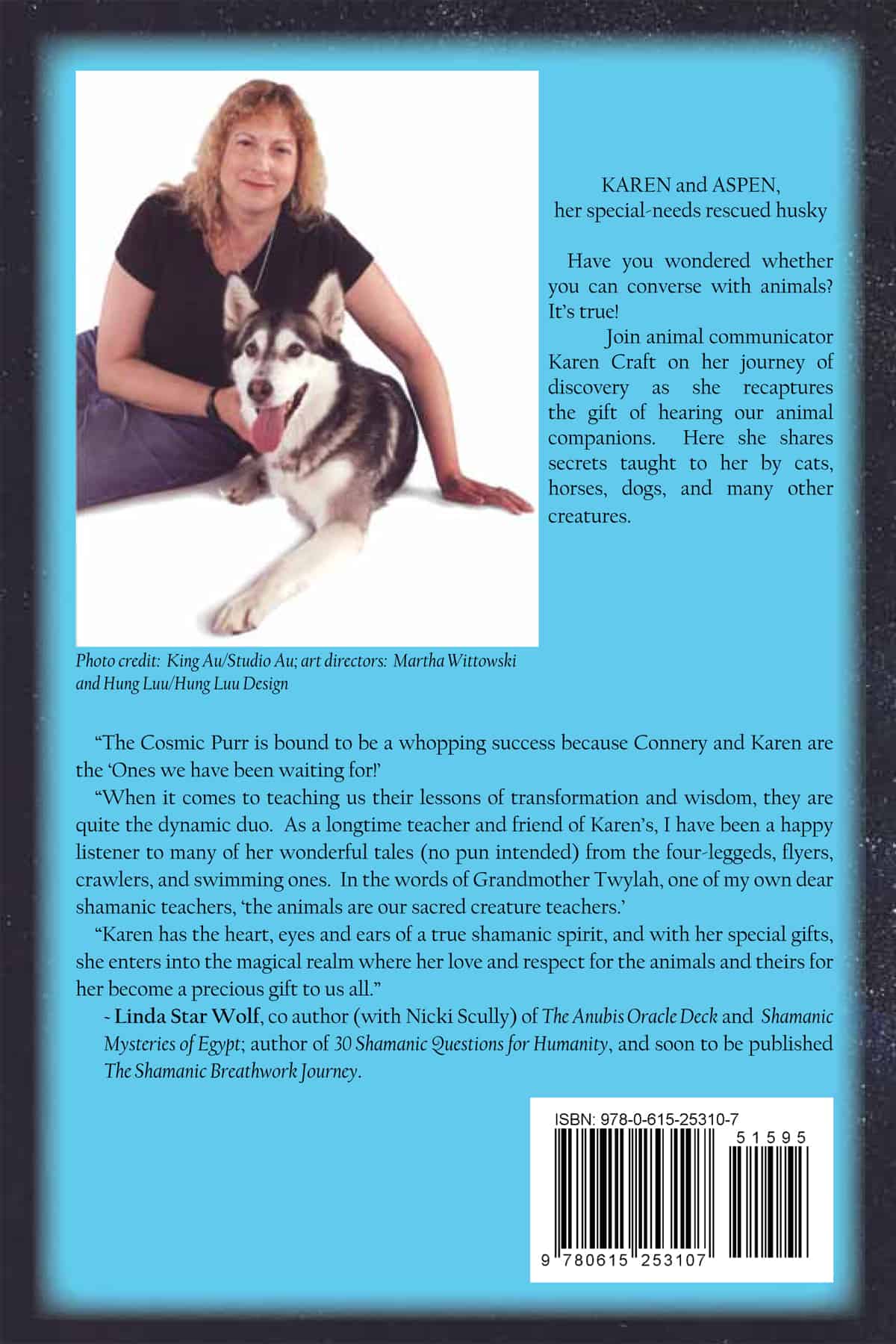 Cosmic Purr Back Of Book

4. Do you prefer to communicate with younger or older animals?It really depends on the individual animal. Many of my clients want to know whether their elderly animal companions are getting ready to transition and how much medical intervention they will accept; it’s my deepest honor to ease the process for the human client which in turn makes things easier for the animal. Lately I’ve found that I can really straighten out pups who are a bit too free using their teeth on their human friends. I explain what happens to dogs that bite and get branded as vicious. I don’t want to traumatize them, but they need to understand that biting can lead to them being forcefully removed from their homes and executed.5. Do you prefer to communicate with a certain type of animal? I mean, do you do better with cats, dogs, horses? Do you even talk to reptiles?Again, it depends more on the individual than the species. Some animals are just more open and willing to speak with you than others. Along with the usual cats, dogs and horses, I’ve been hired to speak with ponies, llamas, birds, bunnies, ferrets, tortoises, and one extremely large Pacu fish, who was very communicative, by the way. I checked in with an iguana for one client and oddly enough found that her energy was similar to that of a cat. One of my fondest memories is of meeting a hamster when I was doing animal communication for the customers of a pet supply store. Two young women brought “Daisy” to meet me, carrying her in a clear plastic hamster ball. They removed the top and she peeked out and told me, “I lead a much more interesting life than most hamsters.” Turned out she lived in a group home as a therapy hamster. She radiated the same pride and dedication in her work that I’ve sensed from therapy dogs. The women confirmed that Daisy had never bitten anyone, despite being handled daily by the residents. 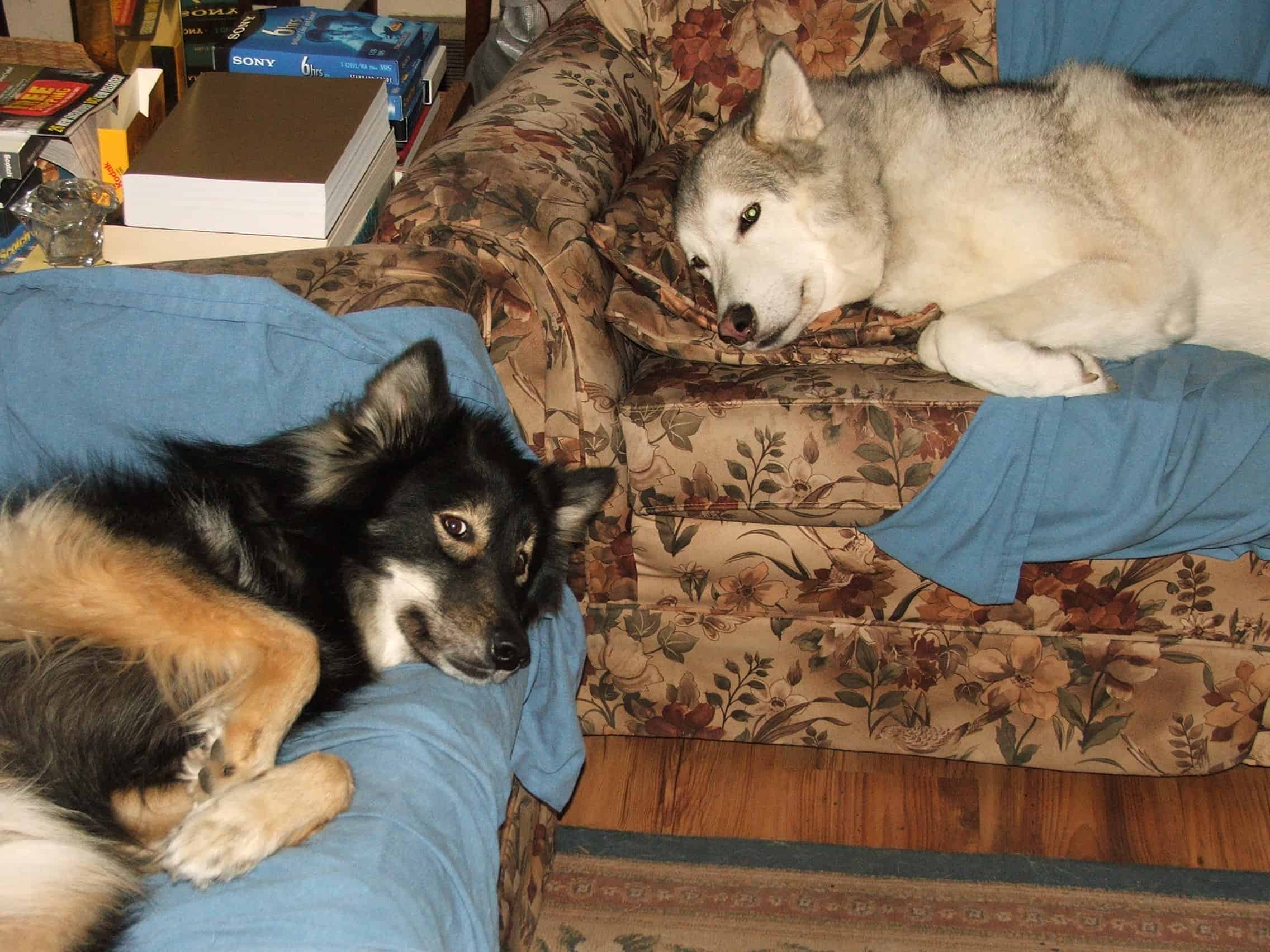 6. How do your services work? Do you come to my home? Do I bring my pet to you? Do you communicate LIVE over the phone or in person?I work almost exclusively by telephone using photos emailed or mailed to me by clients. I also attend expos near my home in central Iowa where I often work only from the people’s descriptions of their animals (though lots of folks keep pictures on their cell phones). When I do personal appearances at pet supply stores where the clients are allowed to bring their animals to meet me, it’s sometimes more difficult to get a clear connection. The fur-kids are too distracted by the other animals, treats, and squeaky toys all around them! I rarely do consultations via email because I like to interact with my human clients as we work together to unravel mysteries or mediate solutions.One caveat about my services: I rarely take lost animal cases except for existing clients where I already know the animal. There’s so much strong and chaotic energy involved in these situations and it’s uncomfortable dealing with it, plus I want to help so badly that I sometimes block myself. There are a few communicators who specialize in lost animal, God bless them.7. What do you charge for your services? Do you have a package deal?I charge $40 for a half hour and $75 for an hour. At expos, I charge $25 for 20-minute consultations. Those who buy a set of appointments get extra time instead of a discount.8. Why do you think animal communication is valuable?Working with a communicator so often smoothes over the bumps when humans and their animal companions can’t understand one another. I can often mediate a solution that’s acceptable to all parties, though that can be a challenge when stubborn personalities are involved, both two-legged and four-legged (or winged, for that matter)! My favorite sessions are with people who just want a deeper connection with their friends; they understand the spiritual nature of the human/animal bond. And though animal communication isn’t a substitute for training or vet care, it can help clarify the situation in these areas. Plus it’s just plain fun to hear your animal friend’s opinions on life.A great thing about animal communication is that it acts as talk therapy for animals traumatized by previous events. Often, behavioral issues ease or disappear once an animal can express what’s happened and let it go. Unlike humans, animals easily let go of awful things they’ve experienced and are so forgiving of the humans who’ve inflicted the emotional/physical pain on them.I’m ordained as a minister and pastoral counselor through the Venus Rising Institute for the Shamanic Healing Arts, so my clients can count on my sensitivity and compassion for humans as well as animals. A very few communicators I’ve met over the years seem to care only for the well being of the animals and forget that the humans have an equal share in the relationship equation. Once when I was taking an animal communication class, I met another student who told me she wanted to be a communicator because she hated people and loved animals. Well, sorry, but you have to be able to work with people in order to aid the animals. 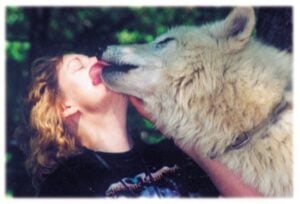 9. Do you think if a vet would incorporate animal communication into their practice it would be helpful?Since vets (like pediatricians) can’t ask their patients where it hurts, input from a communicator can give valuable insight into what the animal is feeling. Of course, I’m not a vet and I’m very careful not to attempt to diagnose any illnesses, but I can suggest to clients what to ask their vets to check on. Communicators can be helpful detectives for vets who are willing to work with them. A farrier I know often hires me to ask the horses’ advice on how she can best help them.10. Are you able to communicate with an animal in the after life? How does that work?To repeat, animal communication is telepathy is energy, and the energy doesn’t die along with the physical body when an animal transitions. Reconnecting clients with their “deceased” animals is a great honor for me. It’s one of the most rewarding experiences as a communicator when a client calls me crying in grief, and hangs up crying with laughter instead. Our animals are such wonderful, gifted healers for us, and that relationship doesn’t end at death. So many of them have a great sense of humor, and that carries on into spirit. They really only want their people to be happy again.Bio for Karen CraftKaren Craft, is a professional animal communicator, Shamanic Breathwork™ Master Practitioner, Reiki Master, and ordained Shamanic Minister. She is also a Master Crystologist, certified by TAOMCHI, The Academy Of Melody Crystal Healing Instructors, and has training and experience in Healing Touch for Animals and EFT (Emotional Freedom Technique). She is gifted in facilitating soul retrieval in humans and animals alike. The majority of her animal communication is conducted by phone; distance makes no difference to telepathy. She offers classes for those who want to learn telepathic connection with their pets. With deep compassion, Karen can support clients through the transition of a beloved animal companion or reconnect them with animals who have crossed over. She also enjoys mediating for multi-animal families, all species welcome. In May of 2009, she published The Cosmic Purr: Inspiration for Animal Lovers

, which includes passages by her feline friend and mentor, Connery, a wise, old-soul of a cat.Visit Karen’s web site at www.animalshaman.com