×
Home » Ragdoll of the Week
Not only our very first Ragdoll but our very first cat is a seal-point female that we named ZsaZsa. Not having had any past experience with cats we wanted a breed that was fun, an “easy” cat for a first-time owner, and (for the lack of a better term) lazy. Some quick research pointed us to a couple of breeds, but the one that stood out was, of course, Ragdolls. 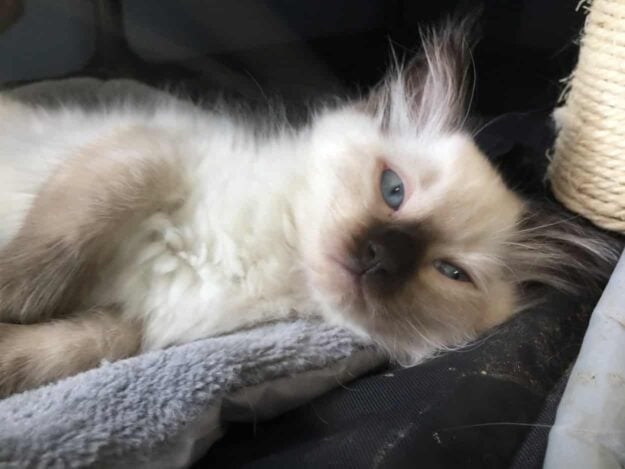 ZsaZsa, before we brought her home from Heidi’s “Haviland’s Heavenly Blue Eyed Dolls”

Luckily for us there is an awesome Ragdoll breeder located not more than one mile from where we live; we can literally walk to Heidi’s “Haviland’s Heavenly Blue Eyed Dolls” in about 10 minutes. This proved to be an excellent situation for us in that once we had visited Heidi’s and picked out our kitten, we were able to visit her on an almost daily basis, allowing us to get to know her, her to know us, and to gather expert advice and recommendations from Heidi. If you’re ever looking for a Ragdoll breeder in NE Indiana, we highly recommend getting in contact with Heidi at havilandragdolls.com. 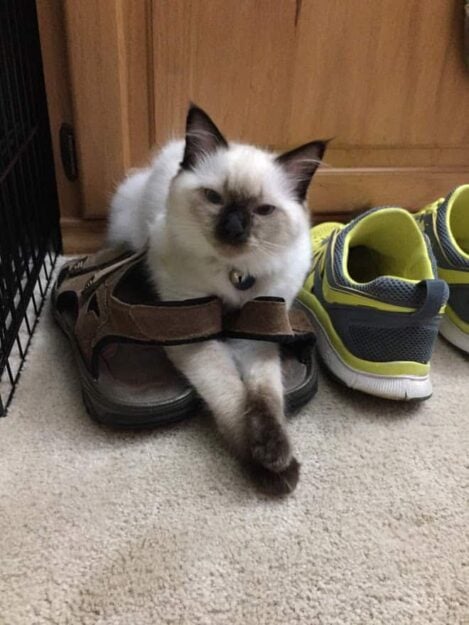 ZsaZsa, just shy of 5 months, in my husband’s sandals

We were able to take ZsaZsa (and her brother Zlatan, who had worked us over with his charms – a story for another time) when she was twelve weeks old. She was pretty scared at first, slinking herself away under whatever furniture she could find but eventually set out to explore the portion of the house we had set up for her. While cautious the first few days she was curious enough to begin exploring the house.Our last name is of Hungarian origin, so we thought it fitting to give our first Ragdoll a proper Hungarian name. ZsaZsa (named after Sari “Zsa Zsa” Gabor) has turned out to be a fitting name for our little princess. She is not afraid to smack around any of the other cats that annoy her, but always seems to do so in a dignified manner. 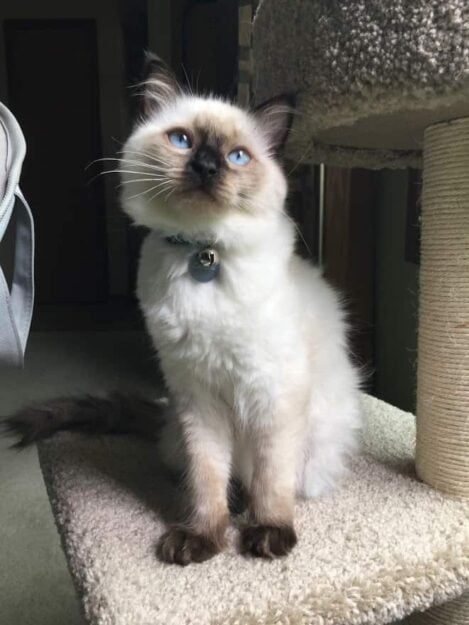 She also likes to roll onto her back to be petted but has an elaborate way of going about it. She twists her body in an almost exaggerated style starting with her head, curling in on herself, and then plopping down onto the ground. Once settled she will look back as if to say, “you may now pet the ZsaZsa”, but she will only lay down just out of one’s reach. If you want to pet the princess, you will have to get off your butt to do so! 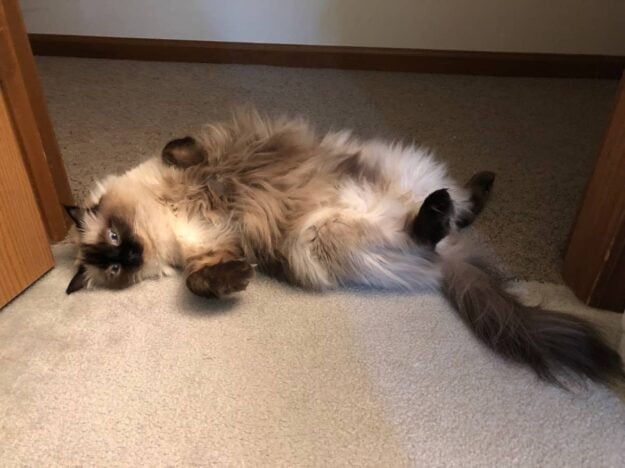 While generally not one to play with toys there are a couple of things she really seems to like. One is a small ball that has a sort of tinsel type material that comes out of it. We call it her “sparkle ball”. Unfortunately, the way she likes to play with it is to take it and shove it into someplace where she can no longer retrieve it. The “sparkle ball” does go missing for weeks, or even months, at a time because of this.She also has a toy that she eats with, which kind of looks like a furry caterpillar. She will place it into her food bowl and alternate between eating food and chewing on the toy. She used to take the same toy and drown it in the water bowl, although she has not done this for quite some time. Which is good because it would become a sopping mess every time. 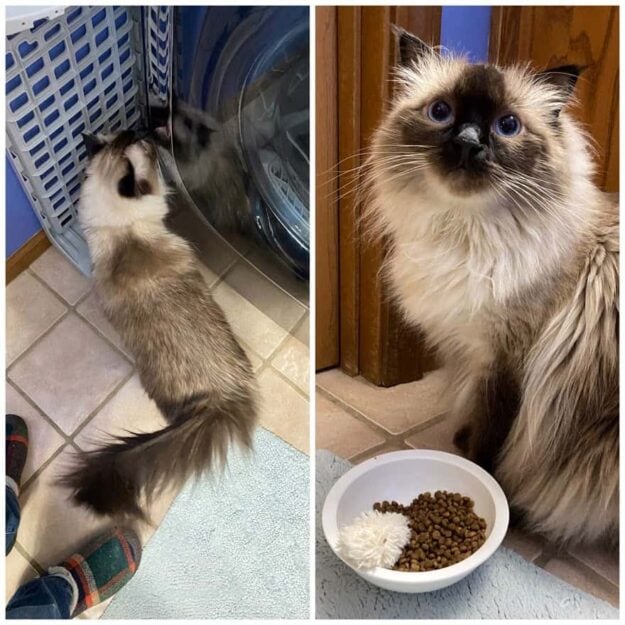 ZsaZsa inspects the space between the wall and dryer / ZsaZsa eats in the laundry room away from her “brothers” with her fuzzy caterpillar toy in the food bowl.

When we first started visiting ZsaZsa at Heidi’s she was very shy and very timid, usually hiding out of our reach whenever we would come to visit. Luckily for us Heidi has a small laser pointer that we would use to bring her out of hiding in order to interact with us for a while.Of course, she would run and hide again at the first opportunity, but she seemed to enjoy chasing the laser around. To this day she still enjoys this, and we recently purchased a BentoPal just for her. The BentoPal turns on automatically once an hour for fifteen minutes and traces random patterns with the laser. She loves chasing the dot back and forth across the front room!

ZsaZsa, a little more than 3.5 years old, under the kitchen table

While the other Ragdolls will do a similar routine when they are in the room, neither does so in such a ritualistic or thorough fashion as ZsaZsa. Because of this behavior and her tendency to growl and run towards unknown noises such as knocks or doorbell rings, car doors slamming, or just about anything else that happens outside she has become known as our “watch kitty”. 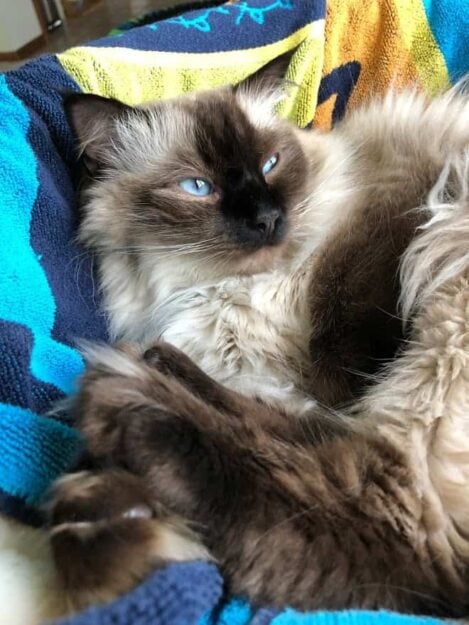 Of all of our cats she is the least photogenic but probably the most stunning. Of course she makes it hard for anyone to get a decent photo of her as she seems to know when the camera is on her and looks away at the last second or just leaves the room completely. We have a lot of photos of the back of her head or blurred motion as she runs away. I think she sees us as annoying paparazzi. 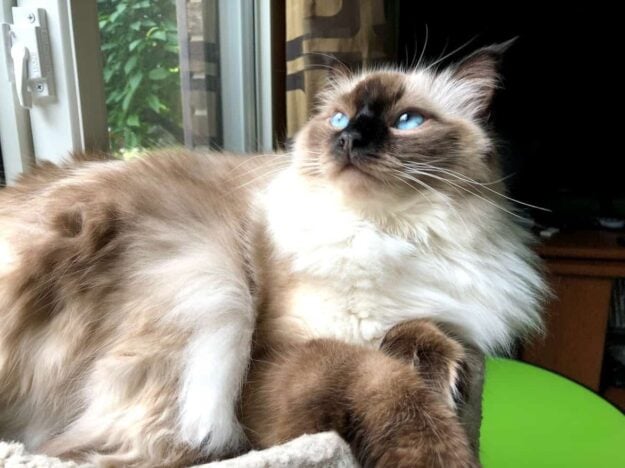 ZsaZsa is almost four years old now and has been a wonderful addition to the household. As she has gotten older, she’s become a bit more affectionate as well. Not what one would term a “lap cat” she can be brought up onto your lap and will sit for as long as she’s comfortable. We will also find her in bed with us on occasion, usually sleeping near the foot of the bed and keeping watch. We’re glad that she’s looking out for us. 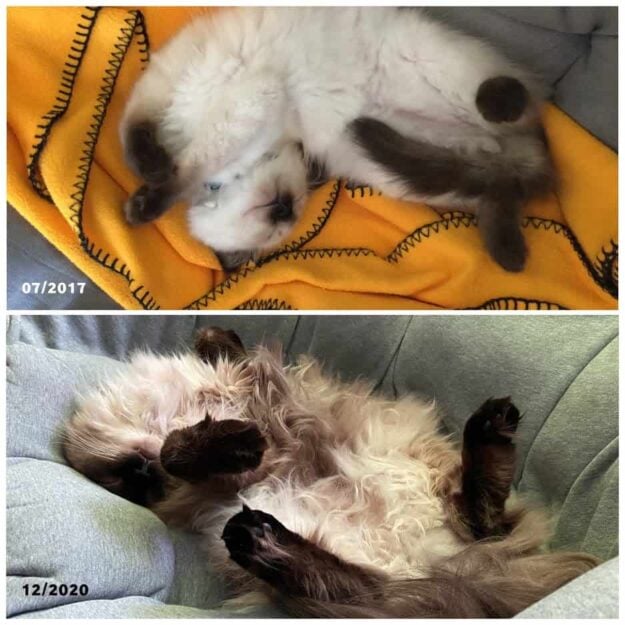 ZsaZsa, napping on her back