Zelda - Ragdoll of the Week 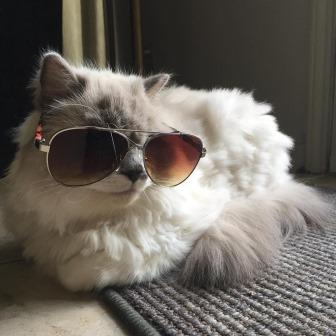 Zelda joined our household in November 2008. She was born during a hurricane that passed right through the breeder’s home, Cajun Ragdolls in Westlake Louisiana. She joined Zoe, also a ragdoll from the same breeder, who was just a few months older than Zelda. The two cats are so different in personality. Zoe is a delicate, skittish little lady weighing less than 8 lbs with a quiet look, very soft coat, and a love of laps and brushing. Zelda is much bigger boned, weighed close to 11 lbs at maturity, with a very thick double coat and bushy tail. When she chooses to talk, her voice is either very loud or stuttering softly, not really a meow. She resists brushing, so I clip her coat with Scaredy Cut scissors during the summer. They are strictly indoor cats, but they enjoy looking at the squirrels from a small catio. It is really a cage that is attached to a window with a cat door flap. I tried walking Zelda with a harness, but I was never comfortable with the unpredictable dogs in the neighbor’s yard, so we put them up in a back room when we entertain so I don’t have to worry about escapes. Both cats suffer with recurrent ringworm every summer. Last year I asked my vet to look for a prophylactic treatment. I tried Program once a month for a year; but it did not prevent another outbreak this summer.The two cats quickly set up a routine of waking up with me at 5:30 AM to get ready for work and waiting in the window for me to return anytime after 4 PM. They could hear the car drive up in the driveway from the window and would run to door to greet me. When the noisy SUV was replaced by a quiet hybrid car, Zelda adjusted by shifting her position so she could watch the driveway instead of just listening for a vehicle. Although I wonder about their overall intelligence, they only reacted this way to cars that I drive! My daughter inherited the noisy SUV, but her arrival never elicited the same response.Now the window waiting game is over since I retired in December. It took both cats a while to realize that I was not getting up a 5:30 for feeding! In the midst of adjusting 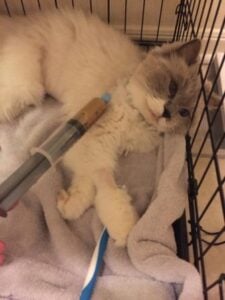 all of our schedules to retirement and a bit of travel, I noticed that Zelda was not meeting me in the kitchen for breakfast at all. In fact, she spent her days and nights in a secluded office away from everyone. In between trips, I was encouraging Zelda to eat when I noticed that the skin around her ears was jaundiced. The vet quickly diagnosed liver involvement based on blood tests showing elevated bilirubin and liver enzymes.We made an appointment with the vet specialist at MedVet for an ultrasound and biopsy for the following week. I spent another long weekend away from home and was shocked when I returned to find Zelda lethargic and skinny. The ultrasound was not very helpful, indicating only that her bile duct was irregular and the presence of an undefined mass that could not be biopsied. The next step was exploratory abdominal surgery. I wanted to explore medications instead of surgery; but I had another ten-day trip scheduled and really could not leave home without knowing if she would survive. The surgeon, Dr. Mason, reassured me that she would not put Zelda through unnecessary procedures if she could not help her. Meanwhile, I started reading about esophageal feeding tube (e-tube), since cats are slow to recover from abdominal surgery and Zelda’s weight was dangerously low going into surgery. 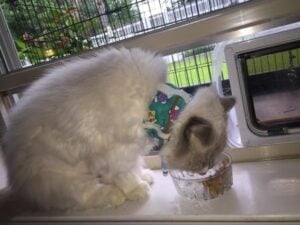 Zelda was released from intensive care two days post surgery with an e-tube protected by a Kitty Kollar, a belly full of surgical staples, a cone, and best-of-all – a biliary stent! We spent 45 minutes with a vet tech who carefully explained to my daughter and me how to manage the Zelda’s recovery at home. We bought a crate on the way home to set her up in a bathroom with a litter box since she could not jump or stretch for 2 weeks. I think she was so happy to be home she put up with the long hours in the crate and 4 tube feedings a day. My next trip (to International Science Fair in Phoenix) was the most difficult – I asked for pictures daily and texted during meetings for updates. My husband and daughter took such good care of her, even so it was difficult to return 2 weeks after surgery and see her laying in the crate with no energy or interest in anything. Her first checkup showed a huge drop in bilirubin so we started to hope that the biliary stint was working. Over the next few weeks, Zelda ventured out of the bathroom, exploring her favorite spots. She began to eat on her own – but never near Zoe who thought she was a foreign creature! If Zelda was out of her crate, Zoe was hiding in a back room! The first morning Zelda jumped on my bed to wake me up, I knew she was back in business. 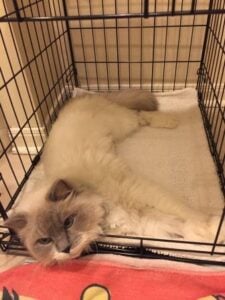 Her weight is back to normal and she has started playing with her toys. Finally, Zelda and Zoe are somewhat friendly, at least Zoe doesn’t run off when Zelda walks in the room. My local vet is following her now with blood work and steroids to control her liver enzymes.There have been a few complications along the way. For example, after a few days on prednisolone, Zelda started eating the clumping kitty litter. I knew the clumping litter was toxic if ingested, so upon advice from Floppycat readers, we now use Exquisicat Pine Cobble. Neither cat likes the texture; but they are using it with no accidents. Then there was my weekend away from kitty care when my daughter called to tell me the feeding tube came out. On Saturday night, our only choice would have been to return to the emergency vet to replace the tube, so I decided to leave the tube out and let Zelda eat on her own. I credit her recovery to both the feeding tube and biliary stint, allowing her to gain weight and begin digesting her food again.When Zelda first became sick, I was reluctant to make the hard decision and commitment (financial and time) to her care; but now I am so glad she has a good chance to recover and have some new adventures. 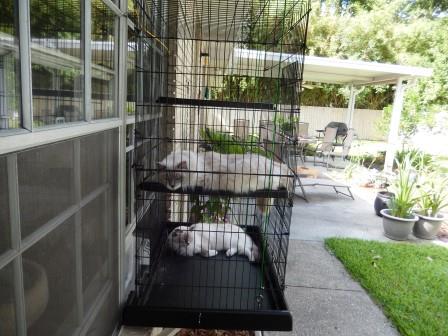 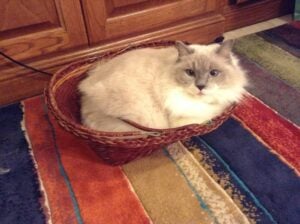 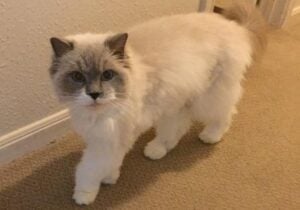