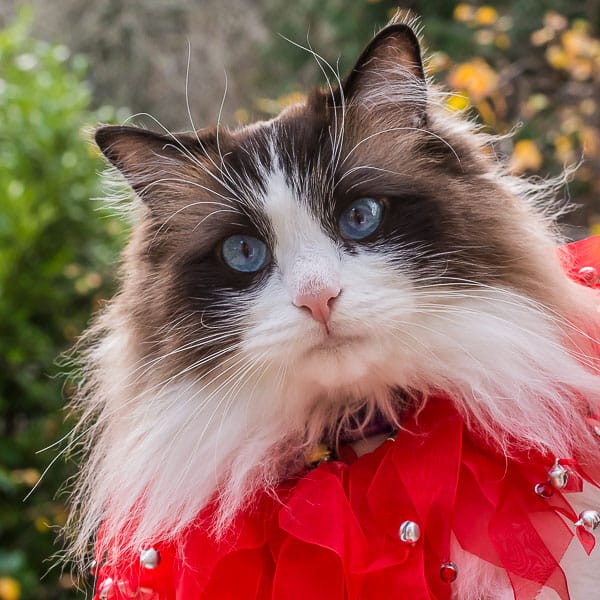 I met Ragdolls decades ago at a cat show and have always been drawn to these beautiful, sweet-natured cats. When my very sociable rescue cat died, I wanted another sociable cat, and Ragdolls came to mind. Having contacted a breeder near where I live, (Ragalong Ragdolls) I set out to “look at kittens” in November 2010. Of course I came home with my fur baby, a seal bi-colour, the kitten with the bluest eyes, born on August 30, 2010. Always a curious cat, as soon as I brought him home, he began to explore. On seeing a scratching post with a pom pom dangling, he started to play, chewing on the pom pom and broke it off in seconds. That is when it was clear to me that this kitten was not a delicate character rather he was slightly clumsy and heavy footed. He still is slightly clumsy and heavy footed. I had to choose a strong name for him and after searching cat names, Zak was born. He is also known as Gorgeous, Curious George and My Doll. 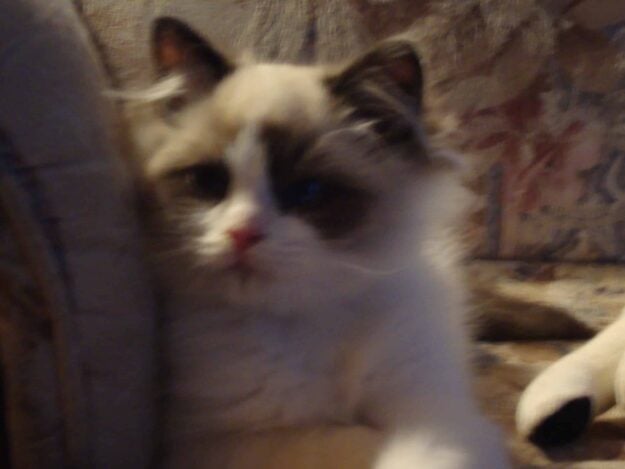 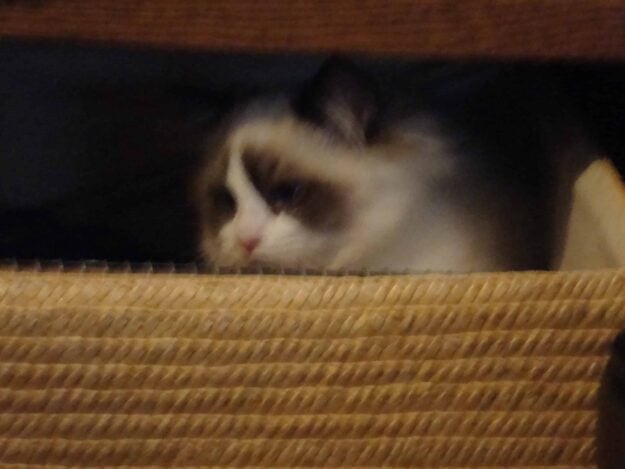 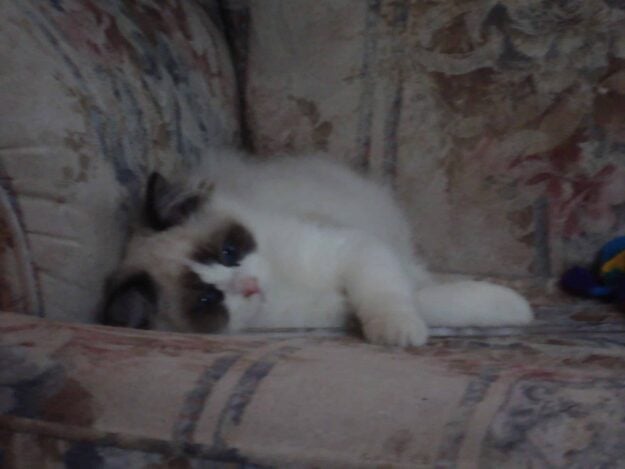 He has blessed my life since that day I brought him home and the joy of his company is endless. He is not a lap cat but likes to keep me in his sights. He will snuggle in the morning; at times during the night, he sleeps beside my pillow. I begin every morning with snuggles with Zak and the sound of his contented purring. Such a wonderful way to start each day. He is a talkative cat and will meow for pats. So, I have to stop whatever I am doing and give him his favorite chin rubs. He also meows for food, meows to go outside, meows just cause. For such a big cat, he has such a tiny meow. He is clever and knows several English words such as mousey, out, fetch, pottie or look. When he hears the word LOOK he will dash to the living room window to see what is passing us by. Zak is curious about everything, even if the action or item frightens him; he still has to check it out. While he is uneasy with my swifter mop, he insists on watching me clean the floor and will occasionally bat at the mop. He sniffs everything that comes into the house including the shoes of guests. He is an indoor cat but has the run of a spacious deck which he absolutely loves. He goes outside rain or shine spending hours watching birds or hoping to see the neighbour cats passing through the yard. With his furry coat, the rain stays on his outer coat and his skin stays dry. He enjoys chewing pretty much anything and will chow down on cellophane if I let him. He seems to love the crunch of the cellophane. He much prefers dry food over wet food because of the texture. 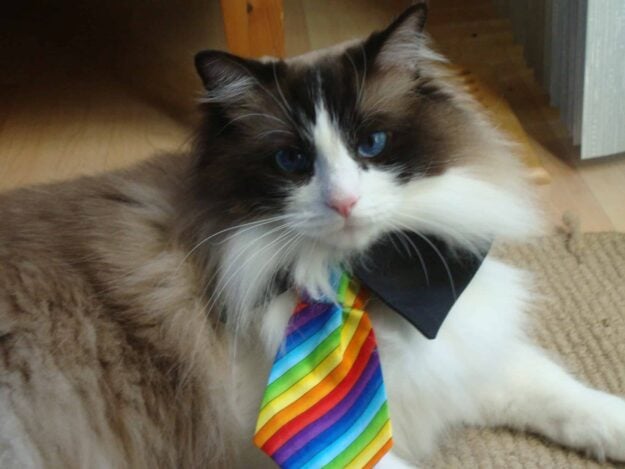 Zak enjoys the company of dogs but when I have arranged with friends to bring their dog over, the dog will not play. Dogs don’t seem to know what to do with a cat who wants to play and will not run away. Zak looks most disappointed when the dog won’t play, following the dog around the house, laying down, showing his belly as the dog walks away. 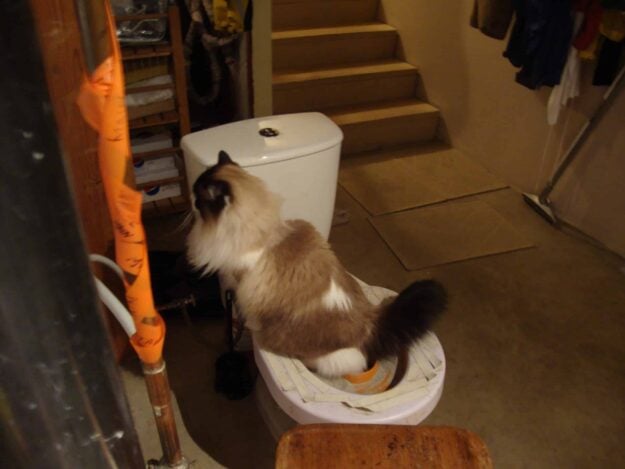 I had a toilet installed in the basement just for Zak. It took months of patience and perseverance to train Zak to use a toilet to the stage of a tray inside the toilet bowl. I have tried to remove the tray but he refuses. It means I have to use some litter but it certainly is simple to clean up after him. The system I used is called Litter Kwitter. 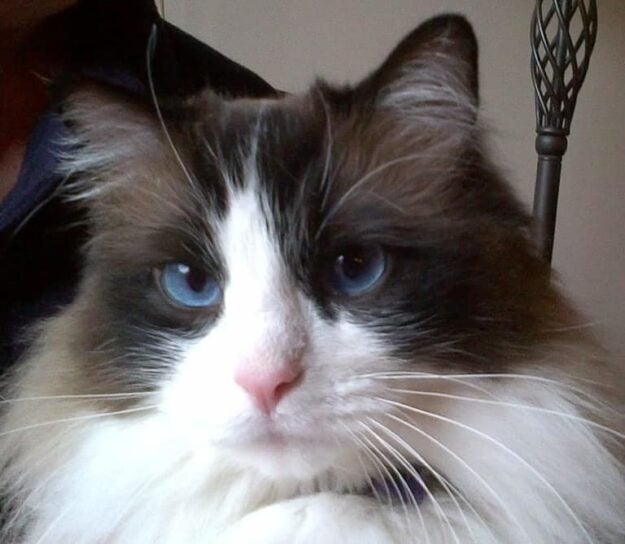 Zak does not like fragrances and he will tell you so. For instance, if I use hand lotion, he immediately wants to smell my hands and once he sniffs, makes this funny face and dashes off. Zak will barely tolerate the odd brushing and it has to be brief. Good thing his fur does not mat. 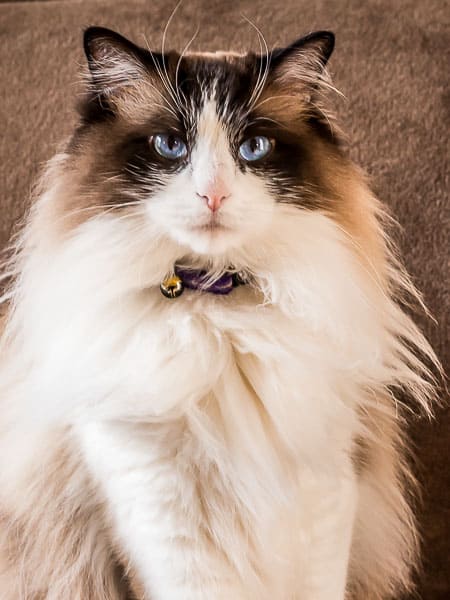 He plays still, at 7 yrs of age never seeming to tire of little mice. Feathers do not interest him at all, his preference is fun. I used to give him these little furry mice but in December 2016, he swallowed a piece of this plastic toy which pierced his intestine and poisoned his system. He was essentially in intensive care at the hospital for 3 days and had major surgery. My vet says he used one of his lives. I am thankful Zak quickly recovered to his strong 12 lb self. I am also thankful that Zak is easy going as I had to give him oral meds several times a day while he recovered. He sat still while I shoved a pill down his throat or rubbed pain killer on his gums. He did not have to wear a collar as good boy that he is, he did not touch his stitches which ran all the way down his belly. A hard lesson I learned; to have coverage of at least six thousand on your pet insurance. Second lesson was about his toys. Zak no longer gets any toys which have a hard plastic body. He has adjusted to having only stuffed, soft sided toys. He also likes hair ties, my feet, chasing a mouse down the hallway and playing peek-a-boo. Editor Note: I met Zak’s mom on Facebook when she posted this in a Ragdoll Health Group I am in. I then asked her to submit his story – wanted to share here in case you wanted to read more about it. Many people have not heard of the Ragdoll breed; when they meet Zak the comment is always about how beautiful he is. I mention the breed traits which make Ragdolls so unique; how they go limp in your arms, follow you around like a dog would, are so easy going, loving and gentle. I so adore my Ragdoll, such a wonderful breed. Do you have a Ragdoll Kitten or Cat?  Consider submitting your kitty!  Ragdoll of the Week submission guidelines

4 thoughts on “Zak – Ragdoll of the Week”