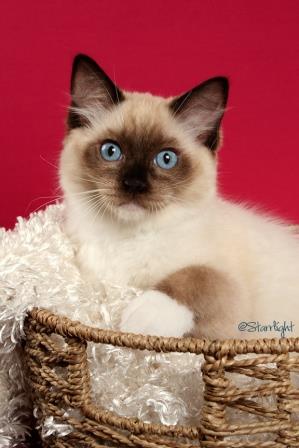 Introducing "WillowTreeRags Sylbr8 of Magnadolz". My new baby girl, seal point mitted Ragdoll born March 10, 2013. She came to California 2 weeks ago from Mable Roberts at WillowTreeRags in Massachusetts. Mable is a lovely lady who breeds beautiful, healthy Ragdolls and I would recommend her to anyone who is responsible and understands that an animal of any sort is a 'furrever' commitment, not an 'until' toy. (Until I have a husband, baby, house, job. Whatever).

Her name is pronounced 'Celebrate'. She was named after my 'sister', Sylva Smith ('Syl'). Plus, many Ragdolls are named after songs. 'Celebrate' ('dance to the music') was on the radio as I was making plans to bring her home. She is adjusting nicely here. And very vocal. She has the sweetest, little baby 'meow'! She has been tested for every genetic problem there is to test for and, of course, all is negative. She is registered in TICA , will be shown and later bred. She is a 'Future Queen' at Magnadolz Ragdolls.

I love the temperament of the breed. Not to say that EVERY ragdoll is sweet and even tempered, but the bulk of them are. Syl weighed 3 lbs 11.5 oz at her well being check up last Monday. The staff at the vets office passed her around, oohing and aahing and were in love with her. She purred, contentedly all the while. 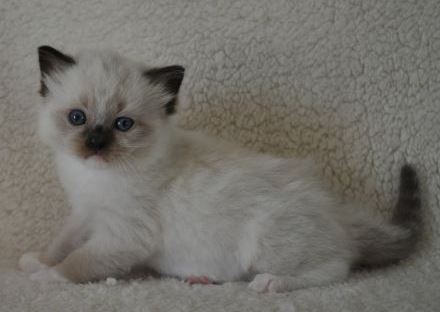 She will be going to the TICA show in Indiana this coming weekend and to the Texas show the weekend after that as a companion to my 8 month old that is being shown. Syl is old enough to be 'exhibited' in the show hall (3 months). This will socialize her to the show hall and when she turns 4 months old, she will be shown. IF she likes it. If not, she will not be shown. I've been a Pageant Mom, a Stage Mom and now a Cat Show Mom. "I can take them, but I can't make them!" I won't push a cat to show if they're not having fun. I will not stress a cat out just for a title. My darlings' happiness and well being means more to me than any title!! 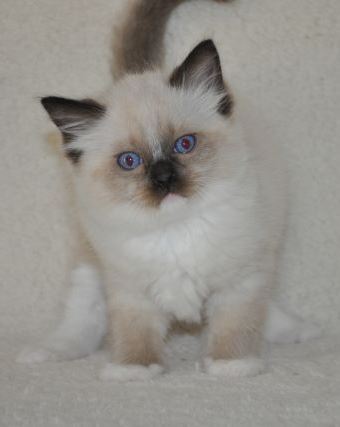 All the while, Syl plays with her 'brothers and sisters' (the other cats) at home. And goes to the Pet store with me when it's her turn. She has learned quickly how to wrap the older, larger Ragdolls around her tiny paw as she lays on her back, paws in the air, 'aren't I just SO cute? I know you'll make room for me to play, won't you??' And they do!

Friends visit our home every day, so she gets socialization there, too. She's getting to be quite the little "itty bitty kitty welcoming committee".

On Facebook, Diana Starr of Starrlight Photography just posted her picture. Diana has a new rose colored back drape and Syl is on it. These pictures were taken 2 weeks ago at the TICA Arcadia show.
I just LOVE my Raggies!! Actually, I love ALL of my cats! 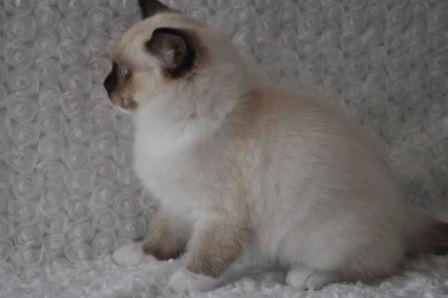