Widget – Ragdoll of the Week The story of Widget, our Ragdoll, begins as so many others, with the loss of our beloved 18 1/2 year old rescue kitty. In 1996, we found two black kittens that were only several days old and kept them alive with eye droppers and doll bottles until they were old enough to eat on their own. They were Rags and Riches. Rags died at 16 years of age, and we lost Riches at 18 1/2. We were so devastated by his loss that we decided not to get another cat.

I am the real “cat person” in the family, but one day my husband said that he thought getting another kitty would be good for us. I had heard a little about Ragdolls, but always had rescue kitties my whole life. We went to a cat show in Largo, FL and met a young lady there whose Ragdoll was expecting a litter. I agreed to purchase one of the kittens and the wait started. It seemed like time went so slowly! Sheena of 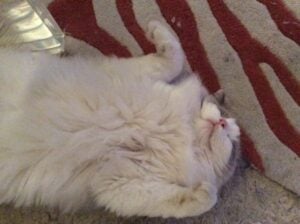 Lollicats, kept me posted with pictures every so often. When our kitten was three months old, she delivered him to Tampa and we picked him up. He slept in his carrier all of the way home to Sarasota and was immediately at home with us. He slept with us for about two weeks and then I guess after he got used to the condo, he decided to sleep on his own and roams around at night. I wake up with his toys in our bed sometimes! As we are both retired crew members from Delta Airlines, we named him Widget, the triangular logo on all of the airplanes. 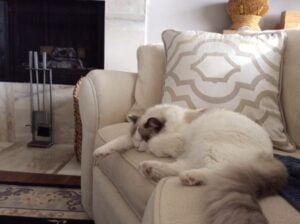 He was one year old on April 13, and weighs about fifteen pounds. He follows us around all day and has to be into everything that is happening. He ONLY drinks from the faucet in the bathtub, so we have to be sure that he has water dripping often through the day. He does not like wet food but loves freeze dried chicken snacks. He loves to play with his laser light and his “feather toy on a stick” but his favorite thing is his tunnel, which he incidentally is getting a little too big to scoot thru. Widgy does not have the floppy body that most Ragdolls have, but he does have the beautiful rabbit-like fur, and amazing blue eyes. I have bought a kitty stroller and take him for rides to get his nails 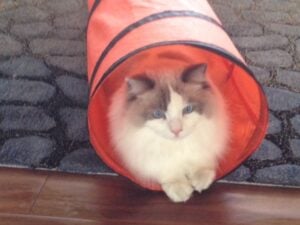 trimmed around the block from where we live. We are on the 15th floor and have not let him out on any of the balconies, without his harness and leash, which he does not care for. He is still a kitten and we don’t want to risk him jumping up on the table and sliding over the edge! Before Widgy arrived, my friends gave me a surprise “kitten shower” with champagne and cupcakes with his baby picture on them. He has brought so much fun into our home and we have just love our Ragdoll!!! 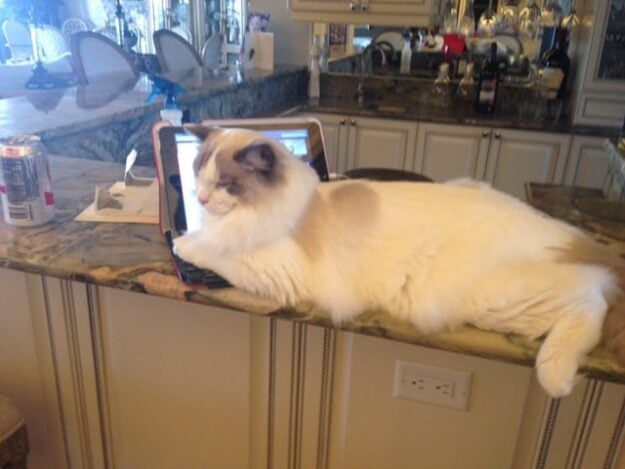 10 thoughts on “Widget – Ragdoll of the Week”