My parents' Ragdoll cat, Caymus (if you're subscribed to our YouTube then you know how crazy I am about Caymus) likes to roll around in his litterbox.  It's gross. 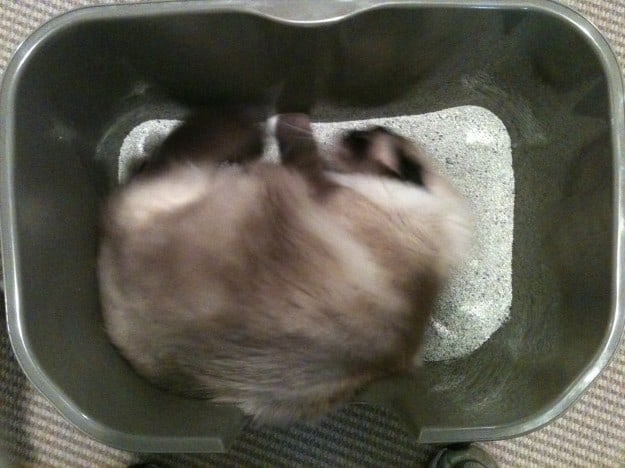 Caymus thinks litter boxes are sandboxes and he likes to roll in them. Gross =).

Recently, a Floppycats reader wrote me and told me that her kitten does it and she wanted to break her of it.  Well, I said, it's doubtful she will be broken of it because Caymus at 10 years old is STILL doing it.

As it turns out, this is a perfectly normal, healthy behavior.

Why Do Cats Roll Around in a Litter Box?

There are three reasons that cats roll around in litter products:

Dust bathing - an activity in which cats instinctively engage when they are in the wild. If a cat is unable to dust bathe outdoors, they will use litter boxes to compensate. Dust bathing enables cats to cover themselves in beneficial digestive bacteria (which they subsequently lick off and ingest) as well as scratch itches that they would otherwise be unable to reach. Scent marking - a process whereby a cat deposits the scent produced by glands located along the tail, on the chin, on the sides of the head, between the front paws, and near the genitals, thus marking any area where that scent has been deposited as belonging to them. It is particularly likely that cats will scent mark a litter box if there are multiple cats competing for access to the same litter box. It is important to keep in mind that because cats frequently groom themselves, it is unlikely that cats rolling around in their litter boxes will pose health risks to their owners so long as they are not petted immediately after having been in the box.

Itching - Yes, it can be as simple as that. When your cat rolls around in the litter, it could simply be trying to scratch an itch. The litter box is a place where it can roll around on a large rough surface guaranteed to help it scratch. It might seem like an odd choice to us, but it makes a lot of sense to your cat.

Check out Caymus enthusiastically rolling around in his clean litter box:

Is rolling around in the litter box dangerous for your cat?

Regardless of the reason why your cat is rolling around in the litter box, it is not a sign of anything dangerous. If you see your cat doing this, then there is no reason to get scared because there is nothing wrong with your cat.

The worst thing that can happen is your cat to get a bath or to get poop stuck in its fur. In long-haired cats, this type of behavior might make some areas difficult to brush, but if it does not happen regularly, it shouldn't be an issue. Is rolling around in the litter box dangerous for you?

This depends entirely on the state that the litter box is in when the cat decides to roll in it. But even in the worst of cases, there is no actual danger. If the cat gets dirty after it gets out of the litter box, it will most likely get your floors, sofa, furniture, or various other surfaces dirty.

As long as you notice this and clean up after the cat, there is no danger. It is important that you do so because there is plenty of bacteria in the cat's litter box and it has no place outside it.

Can you teach your cat to stop rolling around in the litter box?

While you probably can teach your cat to stop rolling around in the litter box if you take enough time for this task, it is not your best choice. The process of teaching your cat tricks is a lucrative one, but it pays off. However, anything you teach your cat to do or to not do anymore, it is a good idea to not interfere with its litter box routine.

In this case, your first step would be to notice when your cat rolls around in the litter box and then, interfere by stopping it, taking it out of the box, and using a specific phrase to let it know that it should not do that anymore.

Naturally, you would have to repeat that for a number of times until, eventually, the cat might stop its litter box bathing. However, any way you do this, it is going to stress out your cat.

And stressing out your cat when it is using the litter box is always a bad idea because it might put a strain on its urination and defecation, which could be very bad for its health.

But while stopping your cat from rolling around in the litter box by actually stepping in when it does it is most likely not a good idea, there are other things you could do.

Your cat will stop litter box bathing, scratching, and rolling if the litter becomes improper for this, right? And you don't have to be anywhere in sight for that to happen. It will also stop it all on its own if it has a better place to do its rolling.

This one is a bit harder to do, but offering the cat a superior rolling alternative than the litter box will solve your problem. Here's what you can do:

Change the litter to make it less roll-friendly

There are plenty of types of kitty litter out there, so you have a lot of choices available. If your cat loves rolling in its litter box, there is a high chance it has a lot to do with the litter itself.

This behavior comes from cats that roll around in the dirt, so a fine litter. If the litter you are currently using is fine, then you might consider switching to one that is coarse.

Another promising choice is silicone-based kitty litter because it is the furthest away from dust or sand. Try some of these options and see if it gets your cat to stop rolling in the litter box.

Change the litter box to make it uncomfortable for rolling

Large open litter boxes are welcoming places for rolling around because your cat has the space to relax and roll around. But there are other types of litter boxes that are not as welcoming, such as closed ones, so you might consider changing the litter box.

It is not a good idea to switch to a litter box than what your cat needs, but closed litter boxes are less likely to cause problems. If your cat is not used to going inside a closed litter box, you may have to show it a couple of times, but it should get used to it quite quickly.

Give your cat a better place to scratch

If your cat uses the litter box to scratch its itches, then all you have to do is offer it a better place to do that. A good idea is using a larger scratcher.

Some of the best scratching posts out there also double as loungers, which means that they offer plenty of space for your cat to roll around in. The fabrics used for the cat scratchers are good enough for the cat to scratch its itches on, certainly a superior choice to kitty litter, so it should do the trick.

Give your kitty an alternative to the litter box

If you live in a house with a garden, then this is something you might consider trying out. Since the cat's litter box rolling behavior is related to rolling around in the dirt, give your cat a place where it can roll around in actual dirt and it will stop using the kitty litter all on its own.

All you need is a small patch in your garden where you can set up a sandbox. A spot where you don't have a lawn set up or plants with dry dusty soil will also do. Introduce the cat to this spot in the garden and it will know what to do from there. The biggest risk is for the cat to turn it into an outdoor litter box.

Keep in mind that these suggestions are not guaranteed to work, but there is a chance that they will. This behavior is something quite personal for your cat and so are the reasons behind it and what it is willing to substitute it with.

While a cat rolling around in its litter box seems strange to us, it is not a dangerous behavior and there might be some good ways to make your cat stop. Does your cat roll around in litter? Has it been doing it for a long time? Tell us all about it in the comments section below.

Does your kitty roll around in his or her litter box?