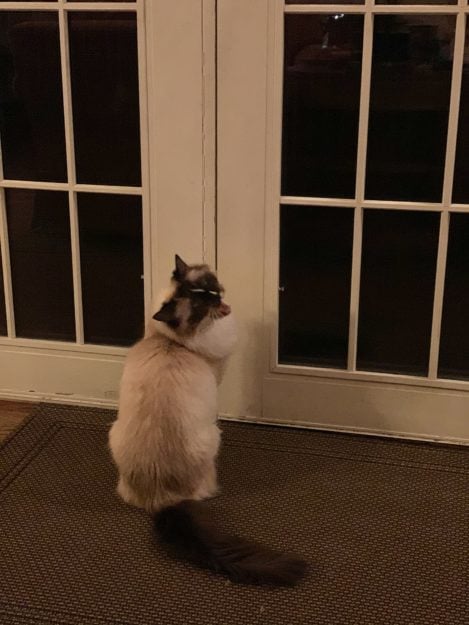 As any cat owner knows, kitties absolutely hate closed doors. They can be at their calmest, but when that door is shut, their inner alarm goes off. They meow, they scratch, they fidget, and they do not rest until that door is open again. They may or may not choose to go through it once it's open, but it is paramount that they have the option. Why? Find out as we uncover the main reasons behind this peculiar cat behavior and what you can do to convince them that some doors need to stay shut, at least some of the time. 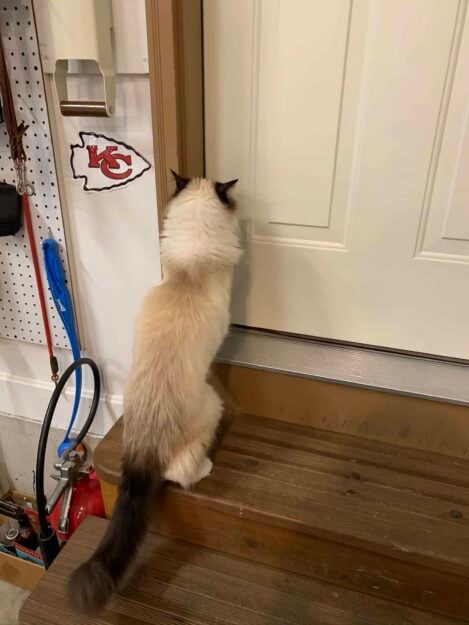 You may regard their protesting to closed doors as a peculiar behavior, but let's look into the reasons why they become alarmed as soon as a door closes:

Cats are territorial animals. They mark as often as they can so that it's always clear what they reign over. Even though you may need to close a door to go to the bathroom, to go into your bedroom or your kitchen, what you might be missing is that the door effectively interrupts access to a part of the cat's territory. And that is a problem. So, don't be surprised if your cat meows, scratches, and fidgets. It's a matter of territory that you have to settle.

Ok, you've closed the door and the cat is left on one part of it. But there's a noise or a smell coming from the other side and your cat can't go over there to investigate, which means that there is a problem. Once again, don't be surprised if the cat will go out of its way to let you know about it. 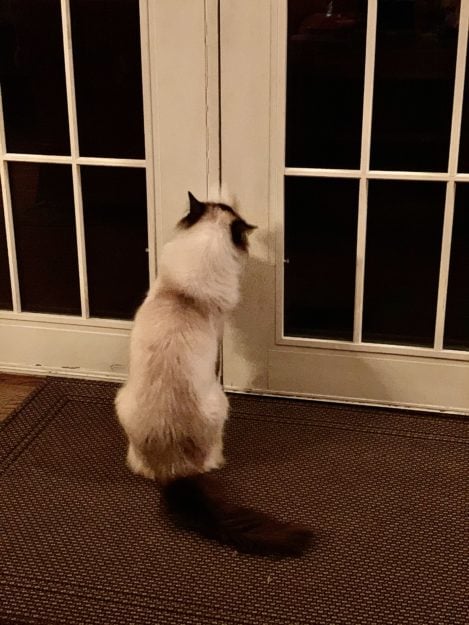 Your cat is part of your family, right? Well, the humans in the household are also honorific members of the cat's clowder (find out more about groups of cats), which means that the cat looks over you. When one or more members of the family are on the other side of a closed door, the cat can't see them, which is a problem. The meowing, scratching, and fidgeting simply means that the cat wants to make sure that everybody is alright. 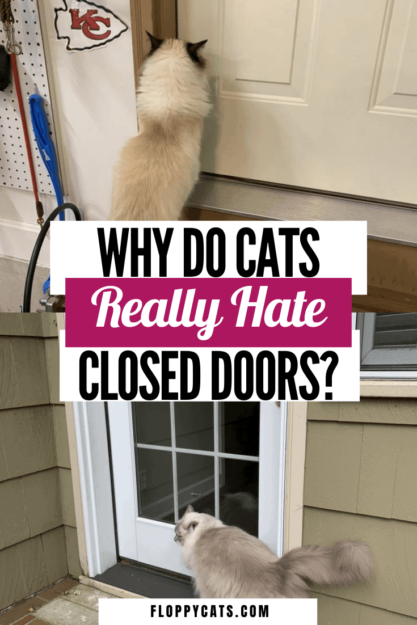 Cats have many ways of letting you know that there is definitely a closed door in your home, but let's go through the most common ones:

Sometimes some doors need to stay closed, even though your cat disagrees with such practices. But what can you do to get a peaceful closing of the door in a house with a cat? Here are a few suggestions: 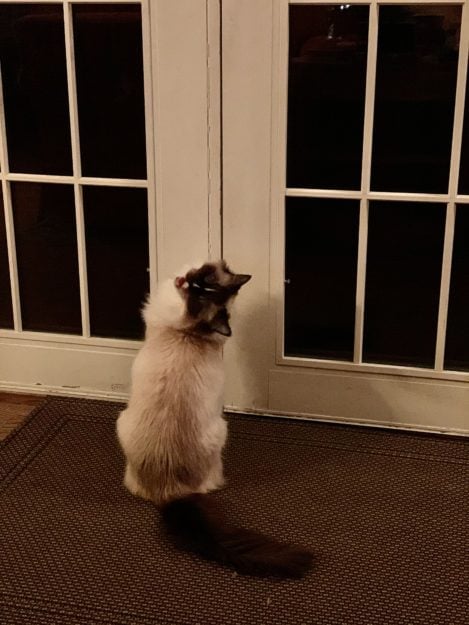 Plan B - Methods that Keep Kitty Away

If you've tried everything else, but you have yet to find a suitable solution for your cat's protests to the closed doors in your house, then there are some solutions that might keep your kitty away from the door: 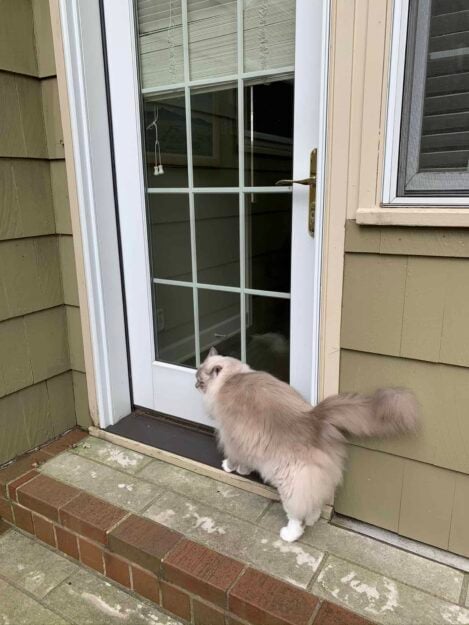 A Key for Every Door

The cat's protests to each door may have a story of their own for your kitty, but they certainly have one for you as well. Here are the most common situations when we need to make it clear to kitty that some doors have to stay closed:

This is a common challenge for cat owners. As soon as the bedroom door closes, the scandal breaks out. In fact, there are two sides to this story, depending on which part of the door the cat is:

When the cat is inside the bedroom with you
It usually goes like this - kitty falls asleep next to you in bed and all is calm and cozy. Until about 4 in the morning, that is, when kitty wakes up and wants to go out. In this case, your best option is to either give in and sleep with your bedroom door open or to leave kitty out of the bedroom for the entire night to make sure you get a good night's rest. Find out more about cats’ nighttime habits.

When the cat is outside the bedroom without you
Kitty might not like that it is outside and that there is a door between her and you during the night. Keep in mind that the worst thing you can do is to open the door for kitty in the middle of the night. Why? Because it will understand that making noise is an efficient way to get you to open it. So, try out all the methods we've mentioned above, and stay strong! In the meantime, a pair of earplugs might be useful. 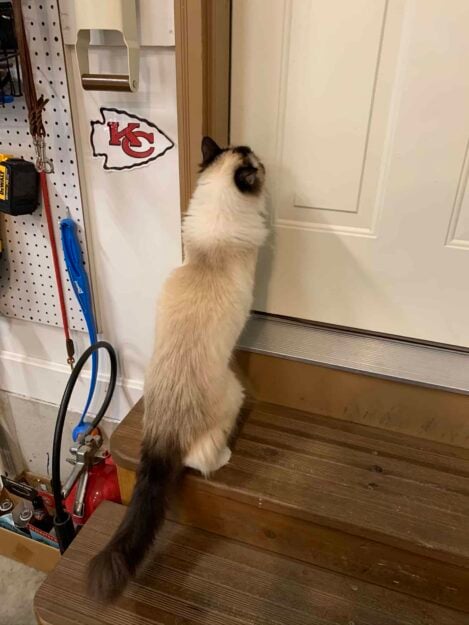 As any cat owner knows, going to the bathroom unaccompanied will simply not do. And closed bathroom doors usually trigger a cat-serenade soundtrack for your shower. To get the cat to accept the closed door, try out Plan A. You can rotate the cat's toys so that you have some of its favorites stashed up. Then, when you want to take a shower, you can give kitty one of its beloved toys to play with while the door is closed. Another good way to distract it from the closed bathroom door is to get it an interactive toy that will engage kitty to play with it and get its attention. If this doesn't work, though, it's time for Plan B.

Cats love everything about closets. They have places to rest, places to hide, and clean clothes and linen to sleep on. Naturally, a closed door to the closet will not be appreciated. Your best option, in this case, is to offer the cat some very attractive alternatives to the closet - such as comfy cat beds, cat trees, cat scratchers. If that doesn't do the trick, then you have to put plan B into action. 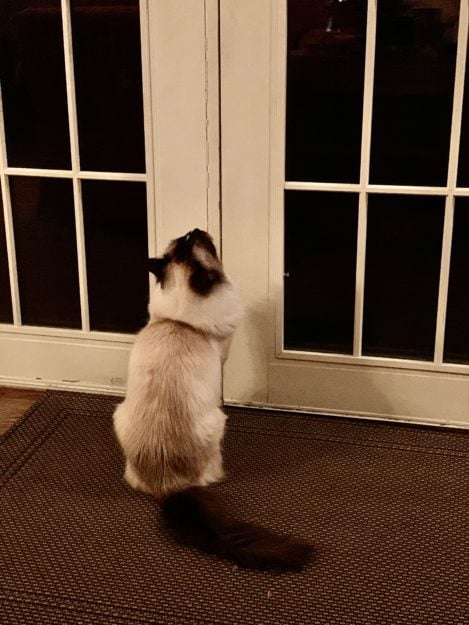 Cats are not happy when you have to go out, and they usually protest. Some cats scratch the front door and meow at it for a long time because they don't know where you've gone, they don't know what's behind the front door. It is very helpful for the cat to find this out, so making a space for it next to the window where it can watch you leave and then come back will help kitty get a better understanding of what's going on. 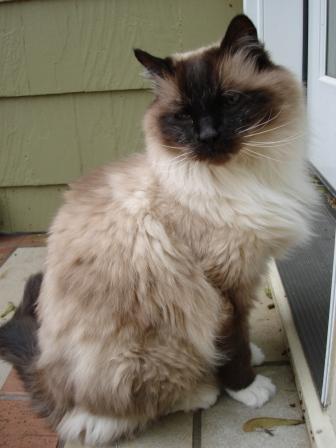 For some cats, the protesting of the front or back door has nothing to do with you walking out through it, and everything to do with their desire to go outside themselves. If this is the case, then you can take kitty outside and let it explore. However, keep in mind that indoor cats must be supervised at all times when they are outside and they should be in a cat harness and leash. An alternative is to build them a catio, where they can play safely outside. Of course, if you don't want your cat to go outside, then you can try Plan A and Plan B.

As you can see, there are plenty of reasons why cats hate closed doors, but also quite a few methods to get them to stop. Does your cat protest when you close your doors? What is the main grievance in your case? Did you get it to stop? How did you manage? Tell us all about it in the comment section below. 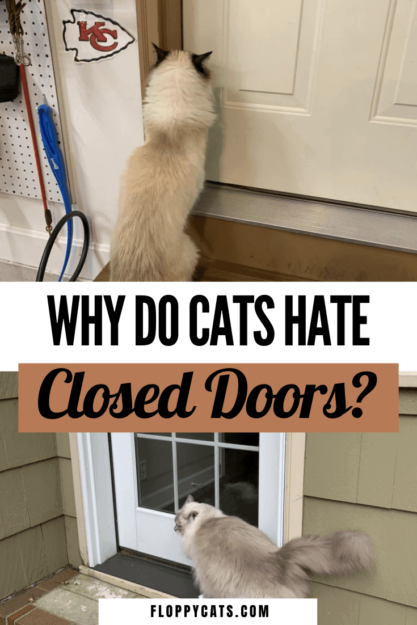 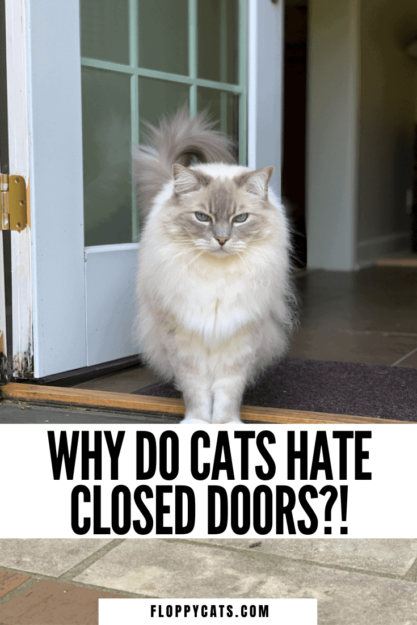