This is an often-asked question in cat-owner communities, but there is heavy debate as to what the right age for neutering a cat is. Even the veterinary community is split between those who advocate early neutering and those who oppose it. Breeders usually suggest spaying cats as early as possible because it is the most convenient option for them. But which of them is right and what is the best age to neuter your cat?

We asked our Facebook followers for their opinions and experiences with neutering and this is what they said.

This is an often-asked question in cat-owner communities, but there is heavy debate as to what the right age for neutering a cat is. Click To Tweet

The Right Age for Spaying Your Cat

For a very long time, the medical community advised that cats be neutered no earlier than 6 months of age because at this age the cat is hormonally mature. Then, a report presented at the 2017 North American Veterinary Community Conference stated that cats could be sterilized as early as 5 months of age.

One of the biggest challenges of operating on very young cats was the success of the anesthesia protocol. However, with recent medical developments, this could be overcome. “At the moment, most of the data indicate that we have effective anesthetic protocols for younger patients. As we start to piece [together] what we do have, there’s a huge suggestion that we can move this time for spays and neuters forward and do better for the cat population and cat owners.”, said Lauren Demos, BVMS, HonsBSc, resident ABVP (Feline), the President of the American Association of Feline Practitioners (AAFP).

A major role in determining the appropriate minimum age for spaying is also played by the data available for research. Scientific literature, as well as studies rarely cover patients so young, which makes it difficult for doctors to access a broad spectrum of data. “One of the reasons that we picked 5 months as an initiative, rather than potentially 2.5 or 3.5 months, is that we want to take this slowly," said Dr. Demos.
In terms of the earliest age to safely neuter a cat, the available data has shown that kittens as young as 6 weeks and that weigh at least 1 kg can be spayed.

This is an often-asked question in cat-owner communities, but there is heavy debate as to what the right age for neutering a cat is. Click To Tweet 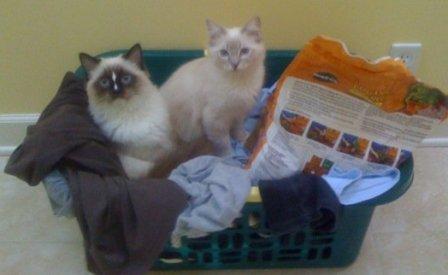 The Benefits of Early Neutering

The available data on neutering very young cats did relay that there are no serious health problems associated with the procedure and that it does not affect the cat's skeletal, physical, and behavioral development. Aside from that, it also pointed out some important benefits:

Performing surgery at an early age takes less time and allows the surgeon to get better visualization of the organs because the cats have very little body fat at that age.
When performed at an early age, neutering surgery also takes less, which means that the cat is anesthetized for a shorter period of time. This also reduces the recovery period. 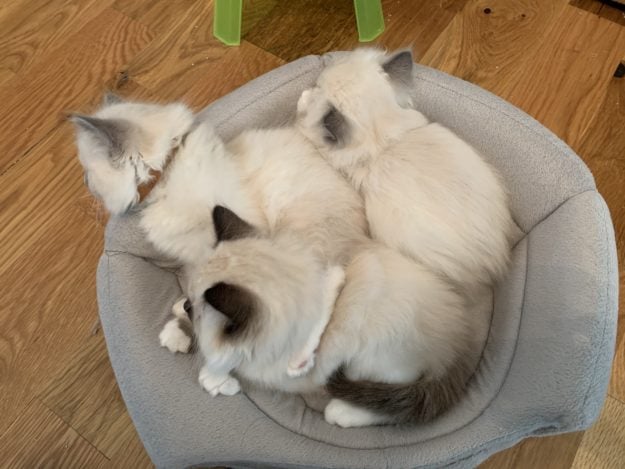 According to Julie Levy, DVM, Ph.D., DACVIM, professor of shelter medicine at the University of Florida College of Veterinary Medicine, kittens bleed less than older cats. She also states that the tissue trauma is not as great because they are more responsive to pain medication. This reduces the recovery time as well.

Please note that this is also true for male cats. Spaying a cat can save its life because a high proportion of mammary tumors are cancerous. When performed early, this risk is actually reduced even further, which should be a central reason to support early neutering.

Spaying a cat also eliminates the unpleasant behavior that cats display when they reach sexual maturity. Both males and females vocalize and change their behavior, but males also roam and do urine marking to assert their dominance, which is extremely bothersome in a household. 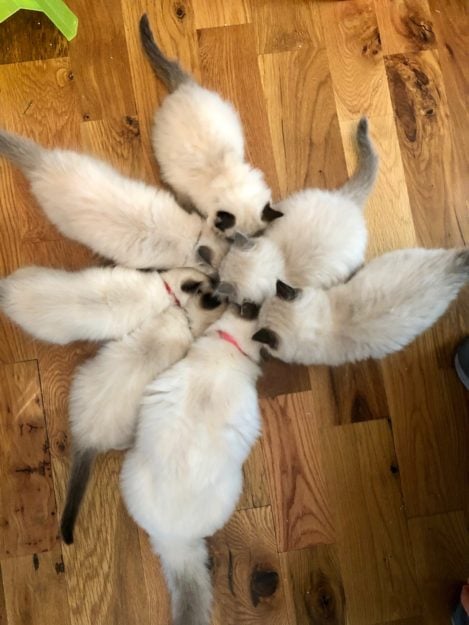 Dr. Demos points out that early neutering can also lead to higher compliance from cat owners. She says that a cat's vaccination is usually completed by the time the cat reaches 16 weeks of age. "If we can tie an early spay or neuter in with that rather than asking a client to come back 2 months later for spay or neuter surgery, we might get better compliance with cats actually becoming sterilized.”, she says.

Cinnamon: My life changed, forevermore, one November afternoon when a Ragdoll kitten captured my heart!
Bluestar: I really love my human family. My Mommy is Laura and my Daddy is Earl.  Miles: We were in love at first sight The members of the veterinary community who oppose early neutering do so because they have some concerns about the procedure. The biggest one is the safety of the anesthesia in young kittens. Dr. Julie Levy says that the major difference between operating on a 6-month-old cat and a 4-month-old cat or younger is that the younger kittens have a higher risk of becoming chilled or hypoglycemic.

However, she explains that this being a known risk, it can be prevented: “That means we feed them a few hours before surgery so they don’t become hypoglycemic, and we have a big focus on keeping them warm. This involves making sure the air temperature in the rooms is warm, they’re not kenneled in a cold place before they’re anesthetized, all the surfaces they’re on are warm, and the whole procedure is efficient so they wake up quickly.” 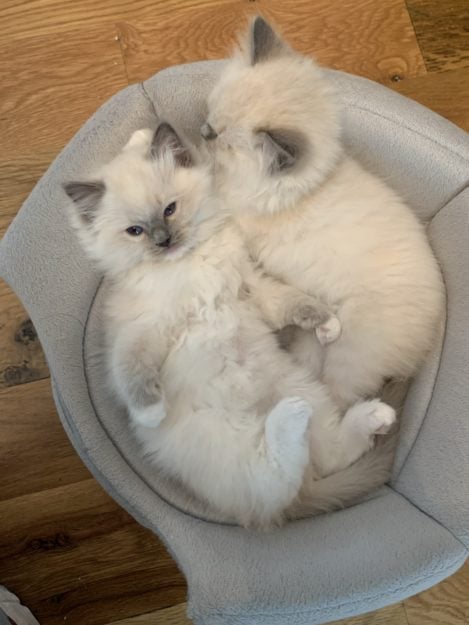 When it comes to neutering Ragdoll cats, a lot of it is decided by the breeders. Cats with pedigrees come from authorized breeders and most of them prefer to spay the cats before they send them to their permanent homes. Most of our Facebook friends who replied to our post about neutering their cats told us that the breeder had taken care of it for them.

One of the main reasons is that cats with pedigrees that come with reproduction rights are more expensive than neutered ones. Typically, if you want to buy a purebred cat and get kittens for it, you have to pay extra for it. Since few people do, breeders were obligated to find solutions to safely neuter kittens at a young age. 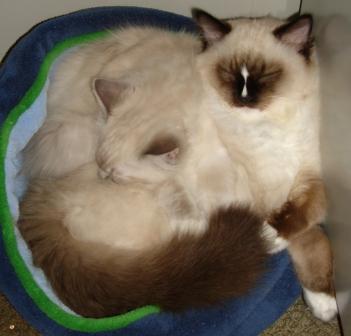 Neutering a male cat is very different from neutering a female cat because the two procedures involved are very different. Orchiectomy, the surgical procedure of removing a cat's testicles, requires minimal anesthesia. The skin on the scrotum is incised and then the testicles are quickly removed.

After the procedure, the scrotum closes up very quickly. In fact, it has a very rapid recovery. The male cat requires very little recovery time after the surgery and the chances of developing complications are very low. 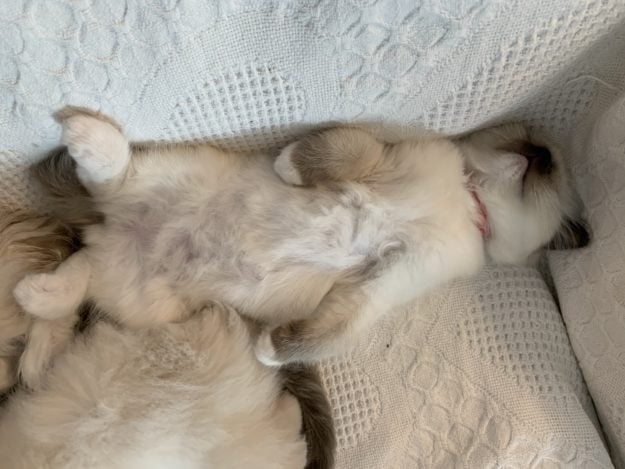 Spaying a female cat, on the other hand, means taking out its ovaries. In some cases, the cat's uterus is also taken out. When it comes to early neutering, the doctor performs an ovariectomy. But whether the cat undergoes an ovariectomy or an ovariohysterectomy, the procedure is far more invasive than the orchiectomy.

The surgery takes longer, which means more time under anesthesia, and deeper anesthesia for the female cat. It also means more pain management medication and a higher risk of developing complications.

The Importance of Early Neutering in Cat Shelters

It is not commonly known that cats can become pregnant when they are as young as 4 months old. This makes it a priority to sterilize both male and female cats in shelters. It is equally important to spay cats that do not live indoors only.

When male cats are in heat, they instinctively begin to roam in search of females. If you have a male cat and it is allowed to go outside, then it can generate kittens. The owners of male cats may not even know about the kittens. However, it is during this roaming period that male cats fight. This puts your cat in danger.

As for the unwanted kittens, in too many cases, they are abandoned or killed. To prevent this from happening, neuter your cat at an early age. It will keep your cat healthy and it will actively prevent cat abandonment. 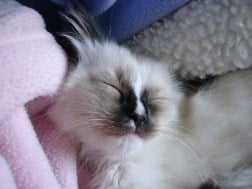 In shelters and cat rescue centers, male and female cats, old and young, are often housed together. It is paramount that shelter cats are neutered as early as possible to prevent reproduction inside the shelter. This is one of the reasons why veterinarians are looking into early neutering. "If performing sterilization just 1 month earlier can reduce the risk for breeding and reduce the risk for offspring, then we’ve made some impact.”, says Dr. Demos. 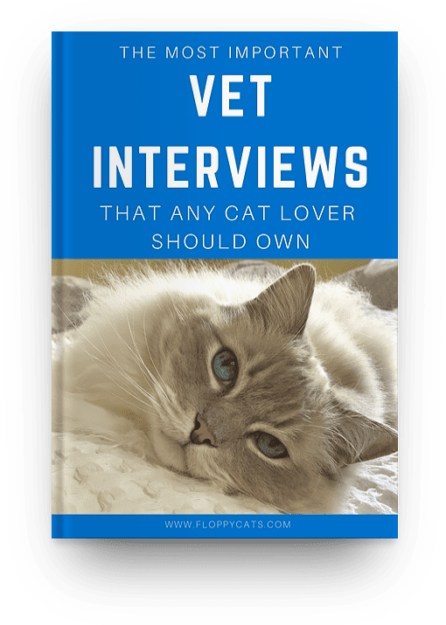 As you can see, early neutering for cats does bring some major benefits. In fact, these outweigh the health concerns associated with having the procedure early on. At what age did you have your cat neutered? Tell us about it in the comments section below.