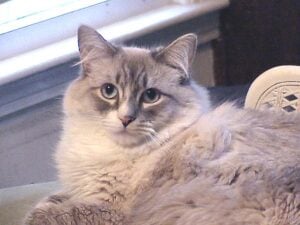 This is Tucker, my wonderful blue lynxpoint mitted Ragdoll with a blaze.  If you can believe it, Tucker is a rescue cat who passed his first 8 weeks at the pound in midtown Atlanta!

In July of 2009, I was grieving for the loss of both of my senior cats, who had died within 2 months of each other at age 17; a Maine Coon Mix, Fred, and Joris, my first Abyssinian and soulmate.  After another two months, the quiet of the house and lack of feline presence made me turn to looking for a rescue while I was waiting for my second-generation Aby kitten who would not be ready to be placed until late August.  I had intended to adopt a rescue cat anyway, as I know that cats are happier with a feline playmate. 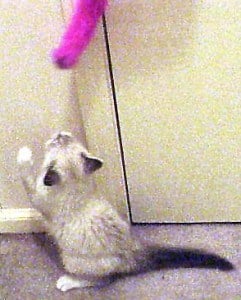 I got on the Internet, and started perusing the local ASPCA websites.  One of the first things I saw was an angelic photo of this dream-like, white fuzzy kitten with baby blue eyes.  I ran - not walked - to the shelter that day to see him in person.   The shelter workers had named him Friar Tuck, because he was so large, and was with his brother, a tiny grey cat called "Little John."  I had to have him.  (Luckily, his brother was adopted the same day!) I counted myself very lucky that no one else had taken this beautiful baby boy. 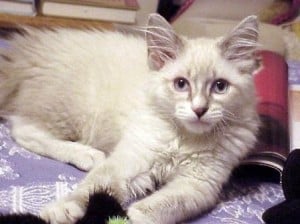 I took him home.  He did not have any papers, but as I have showed Abys in CFA, I know most of the breed standards.  I suspected that Friar Tuck was a Ragdoll from the first. His large blue eyes, mitts, and points were clear at just two months, and within a couple more months hi belly pad stated developing. After consulting with many friendly and helpful purebreed Ragdoll breeders, I knew I had a Ragdoll, not just a "wannabe!" 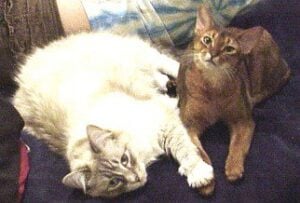 Tucker and Athos at 5 months old

Within a week, Friar Tuck became "Tucker."  When my Aby kitten arrived, I separated them, as Tucker had already grown (he was growing by the day - right before my eyes), and three-month-old Athos was tiny.  When Athos escaped into the rest of the house (as Abys will), Tucker engaged him in some play - I thought that Tucker would kill Athos just because of his sheer size, but it was love at first sight.  They continue to adore each other, as you can see if you view the video took of them last September.

Tucker is a beautiful boy, and very sweet.  Unlike many Ragdolls, he is a little shy and is no lap cat, but he follows my husband and I around the house and salutes us with his quiet "mews" and trills.  He always enjoys a brief cuddle, but still has the habit of backing away if you hold him too long.  I attribute this to his humble origins in the pound, and I hope that he will eventually feel safe enough to become a lap-sitter.  He loves to do the Ragdoll "flop," and sometimes sleeps that way.  He likes to climb, but once on the cat tree he cannot jump down without giving a little grunt and a big thud! 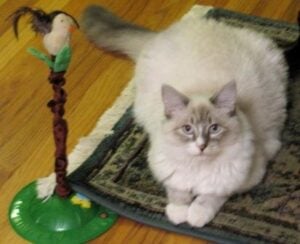 At 16 months, Tucker is still growing and his color has come in beautifully.  Today he weighs 16 pounds. I know that Ragdolls are one of the largest breeds, but he is already so big, I wonder how much larger he can get!  He still has his kittenish ways, and loves to play with his humans and his foster brother.  He is a joy and a gift from above, and he has found his forever home!

Tucker was born on or about March 28th, 2009.  I never saw his mother, but she had given birth at the pound. 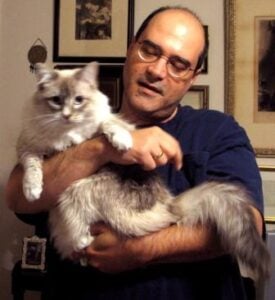 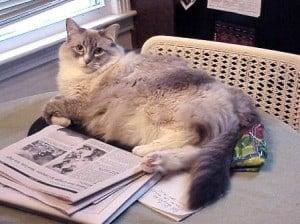 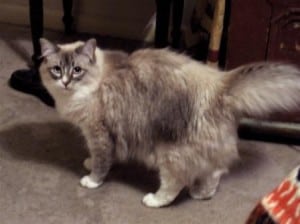