Traveling with a Ragdoll Cat by Car Do you ever give your Ragdolls any medications prior to car travel? We travel from Florida to our hometown in Mississippi several times a year (5 hour trip) and have taken Rocket, our Ragdoll kitten, with us on 4 trips so far. He has never vomited or had any drooling, but it takes him about an hour to settle down (meows off and on & scratches all around in his carrier). If I let him out of his carrier, he still meows and climbs around to different areas in the car. He usually settles down after about an hour and naps off and on. He just does not ever seem completely comfortable.

I've tried a couple of different brands of natural calming aid chews from Petsmart/Petco, but he will NOT eat the chews. I've tried crumbling them in his food, mixing them with his treats, etc. I certainly do not want to "drug" him, but I do want him to be comfortable. The vet said he can have Dramamine (he is 7 months old and weighs 9 pounds), but I was just wondering if you had any experience with giving your Ragdolls anything for car travel.

I've also ordered him a pet car booster seat to see if this will help, since he does not like being in his pet carrier. I feel certain it is the motion that bothers him, since he calms down right away when we stop the vehicle. We do not have any issues with him at our parent's or friend's home where we visit. He acts right at home wherever we are with no behavior problems whatsoever.

Any suggestions would be greatly appreciated 🙂

No, I read or learned somewhere a long time ago that the worst thing to do is to medicate an animal for travel.

You might try Rescue Remedy -  - to see if it does anything different. Didn't help my Charlie who foams at the mouth, but other readers have reported that it works. You can also read the reviews on Amazon through that link.

Cindy did want me to post it on our Facebook page and I did so - readers offered great suggestions.

Just wanted to give you a success report 🙂 The Rescue Remedy worked great for Rocket!!! He had just a few minutes of meowing and scratching around, then he settled right down and slept most of the trip.  I also got him a pet car seat where the car seat is secured with the seatbelt and the pet is secured with straps that attach to his harness.  The straps are adjustable to allow the pet to move around or sit up in the seat without being able to get out of the seat.  He was MUCH happier in the pet car seat (he was already accustomed to a harness and leash).
Thank you so much for your help and sharing my question on your Facebook page! I now have a much happier traveling kitty!!
I then asked Cindy if I could share this all on the site with you all and she said: 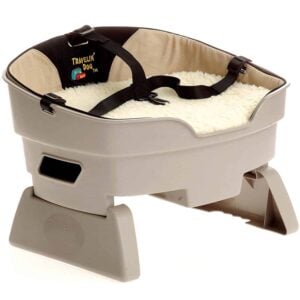 I don't mind at all for you to use my emails and photo(s) as a blog post. Your blog posts have helped me so much with my furbaby, so I'm happy to share anything that helps others! I don't mind if you use my name if you want to.
This is the product and the dosage I used:  I gave him 2 drops of the Bach Rescue Remedy liquid directly on his tongue about an hour prior to departure and then 2 more drops immediately prior to departure after he was strapped into his car seat.
Here's a couple more pics that show Rocket sitting in his car seat and looking out the backseat window of our truck.  I adjusted the straps just enough that he could look out the window but not be able to get out of the seat from the front or sides. I ordered the pet seat from Petco.
Thanks again for all your advice and assistance!!
You can order the Travelin' Dog Car Seat or on Amazon's.