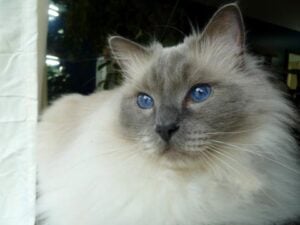 In March, 2011, I was browsing on kijiji.ca, and came across an ad for a papered, 3 year old blue point ragdoll at a local cat rescue. The photos were blurry, but there he was, the Ragdoll of my dreams!

The ad had been posted minutes before, and I, after some wheeling and dealing with the husband, snatched up my phone, and made the call.

That afternoon, with carrier in hand, I went to pick up my Toby. Upon arriving at the rescue, I was horrified at the conditions he was living in. There were cats milling about everywhere, several litters of "ragdoll x kittens," and the smell was enough to knock me off my feet. 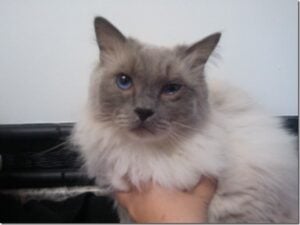 Toby then, 8lbs, bony and so sick

Toby was a disaster, but I didn't dwell on it at that moment, and spirited him away. I then reported the rescue to the SPCA, and it was subsequently shut down.

I brought my Toby home, and did a full assessment. He had severe eye infections, ear mites so badly he was bald from his ears to his eyebrows, and around the back of his head, he was significantly underweight, with every bone in his body prominent, matted beyond belief, and he was terrified. He was afraid of men, cats, dogs, kids, dust bunnies, shadows, essentially, 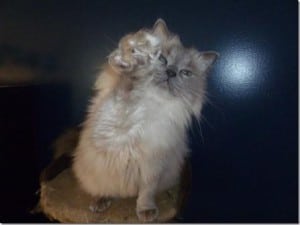 Toby now, 15lbs, and healthy as can be

everything. My heart wept for the cat he should be, and for whatever had happened to him in the year since he left the breeder's home that he had been apart of.

Toby took to me like white on rice, and allowed me to remove his matts, clean and medicate his eyes, and his mites. He purred when I approached with his lysine laced meals, a quiet, subtle "thank you." Day after day we danced, me sitting quietly on the floor, and him slowly making his way towards me, shying away and 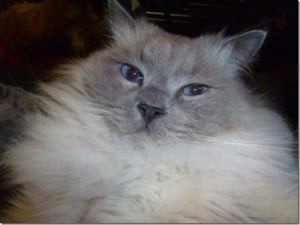 advancing, as household noises went on in the background. In time, his eyes cleared, his mites perished, his coat became matt free and manageable, and he steadily put back the weight he was missing, but he was not happy. He went through the motions, it seemed, surviving from one day to the next.

Finally, after about 6 month, the switch was thrown, and he fully came out of shell. His purr grew to a loud freight engine purr, his eyes brightened, he started seeking attention from anyone and everything in the house, including my husband and my then 18 month old 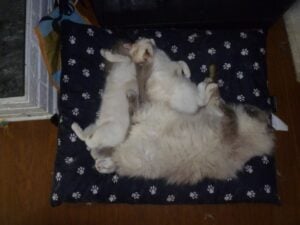 daughter, and he started playing. I'll never forget watching him prance out of the bedroom that morning, and attacking the toy mouse, throwing it around the house for a good hour. That's when I knew that I had finally done right by him.

Toby is my heart cat. He is not a typical Ragdoll, based on his experiences, he can be nippy, and snarky, but he is a supreme suck, and his love knows no bounds. He is so patient and caring, accepting my new kittens like they had been here all along. I have such conflicting emotions towards those that had him before me, but ultimately feel pity, as they never got to experience the joy that is being headbutted by my 15lb, purring, kneading and furry friend.