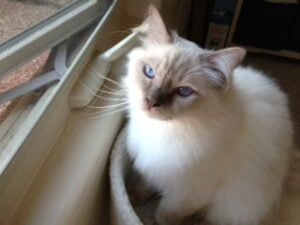 Hi - My name is Toby "Kiki" Love and I will be 2 years old the middle of June.  I moved to the desert southwest in early February 2013 to live with my human mom (Mom) and human dad (Dad).  My original home was with a breeder in Utah.  My mom says she kicks herself for not doing her due diligence on the breeder as she really doesn't know much about her policies and practices.  I was described as a lilac Ragdoll boy with a beautiful coat.  A quote from the website said, " There is nothing wrong with him - he is just a little older " and I was offered for a discount adoption fee.  Later, in an email, my breeder disclosed that I was a little " shy ".   She did not disclose that I had issues.  On the ride home from the adoption (which was a half-way point between my old and new home) my new mom noticed that I was sneezing alot and that my left eye was kinda pink.  Two days later she took me to my new vet, Dr. Tammy.  I was given antibiotics for a possible upper respiratory infection and told that I probably had conjunctivitis, plus a strong possibility that I had feline herpes of the eyes.  My new mom was not too concerned until she realized that the herpes was for life.  I still suffer from 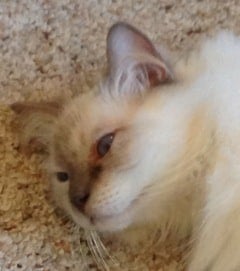 occasional gooey eyes but Mom has given me L-lysine and recently started me on Dr. Willard's Water. It was recommended by Dr. Jean Hofve on floppycats.com (see link under the Healthcare tab / Cat Herpes).  We are also going to try flower or Spirit Essences to help keep my flare-ups at bay and to help with my scaredy-cat behavior.When I arrived at my new home I was set-up in a safe room but I was extremely scared.  I hid in the closet and under my human parents bed for weeks.  My mom wrote to Ms. Jenny at Floppycats.com who offered advice and a recommendation to talk to Melinda Hughes at Merlin's Hope (A Ragdoll and Maine Coon Rescue).  Melinda was so kind to write an extensive email to my mom and much of her advice has helped me.  BUT, even though it's been 3 months since I came to my new home I still do not allow my parents to hold and cuddle me.  I talk a bunch and every morning we tell each other "HI" and "I LOVE YOU".  Mom says that my I love you sounds like " E-ooo ".  She is trying very hard to learn kitty language.  My dad built a wooden enclosure around the bed frame so I was no longer able to hide.  It helped me to come out and explore my new home.I'm kinda finicky about my food and do not like to chow-down.  My mom says I eat like a bird but I weight almost 10 lbs. and have big paws so maybe someday I'll be a big kitty.  I particularly like my dry kibble from Life's Abundance and I really like my kitty treats from Pet Naturals.  We have 3 kinds, Calming, Daily Best and L-Lysine.  I only get one each in the AM and the same in the evening, because they contain medicine and vitamins I cannot have a bunch.  She fooled me with Greenies Pill Pockets to hide my antibiotic pills, which was a good thing 'cause no way was I gonna allow her to catch me and squirt that disgusting, sticky, banana flavored gunk in my mouth...EWWW!On my second visit to the vet's office, which was 2 months later, I was seen for diarrhea.  It took my human parents almost 10 minutes to chase me into my kennel because I wasn't about to let them hold me or pick me up.  Once we got to the office I was seen by Dr. Tammy's husband, who specializes with eye issues, and it was confirmed that I have feline herpes.  (The diarrhea was something else).  It was discussed that I was still showing behavior of an extreme scaredy-cat and at one point the doc asked my mom if she was willing to "deal with me"...because the herpes is for life and I may never get over what the breeder so wrongly called shyness.  The doctors and my human parents think I was not taught social skills and/or lacked human interaction at my old home.  They also think that it's possible I was low on the totem pole of the cattery pecking order??? 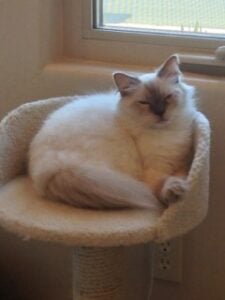 Now, even though I am a "Don't Touch Me" kitty I do have some normal kitty behavior.  My favorite things are playing with my Bergan Turbo Scratcher, my wand toys with Mom and my laser light with Dad.  My mom says she is going to purchase some Neko Flies for me asap as my squeaky mouse wand is almost broken...so it's time for something new that will last.  I love to sit by the front door and watch the birdies every morning.  Course, I can't venture outside 'cuz a big screen covers the opening.  (I'm not looking forward to the hot summer when we can't leave the door open).  I also love to sit on my perch in the den and listen to the birdies while I cat-nap.  At night I still sleep in the closet but occasionally I sleep at the end of my human parents bed which makes Mom so happy. 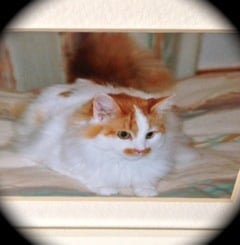 Before me, my mom had a forever friend named Ollie.  He was a rescue kitty that resembled a Turkish Van and he had an orange mustache that she loved.Sadly, he crossed over in 2006 so it's been a long time since my mom has had a kitty.  Before finding me she did lots of Internet research on Ragdolls and loved the idea of our gentle floppy nature.  I'm sure some day I will allow her to cuddle me because so far I've allowed her to scratch just below my ears and once or twice she's rubbed my "kitty-belly" when I was really relaxed....and...I LOVED IT!I am so happy that my new parents adopted / rescued me AND have not given-up on me!!!   xoxoxWhen I was younger.  This is the picture my mom saw on the internet and says she was being drawn back to again and again...yeah!! 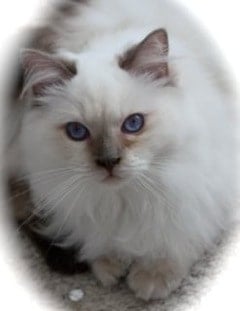