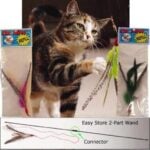 My cats love interactive toys. In our house, cat wands are the toy of choice of interactive toys.  I have had multiple cat wands over the years, but for some reason, I have overlooked the Da Bird. Jackson Galaxy uses the Da Bird with many of his feline clients, and he seems to highly recommend the toy, so after watching him bring an almost feral cat out of hiding with the Da Bird, I jumped on Amazon.com and ordered the package.  I ordered the Da Bird Super Pack, which includes the Da Bird Original 36" Single Pole Cat Toy, a Feather Refill, a  Sparkly Attachment, Kitty Puff Attachment, and a Peacock Feather.

There are actually a large number of packages for the Da Bird, some with just the fishing pole, while others come with a variety of attachments. These attachments are also available separately. They cost from upwards of $4 and are available in a variety of types. You can also buy the Da Bird attachments at the Jackson Galaxy store.I pulled out the three foot wand toy and the attached feather toy. We played for about 30 minutes. Every single cat in my house, with the exception of my 15-year-old Nimue, came out and played. This wand toy has an extra bouncy action in comparison to the Cat Dancer wand toy I also ordered. The Da Bird really had the cats jumping everywhere.  When I was ready to quit, though they weren’t, I just laid it on the bed. That was a big mistake. They decided to pull it off the bed and play with it by themselves. Unfortunately, the poor bird attachment did not survive their assault. Because it has a metal clip where interchangeable toys can be added, I just changed to the other feather toy. 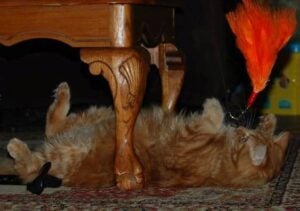 Since my packet came with several attachments, I tried them all. They much prefer all the feather toys over the sparkly attachment, but any time I pull out the Da Bird, it is full throttle play time. I am thrilled this toy has been such a hit.Though I love this toy and highly recommend it, I do have a couple of concerns. One, it does have metal parts, and as one reviewer on Amazon remarked, it could be dangerous if your cat is a chewer. The reviewer remarked that he covered the metal part with duct tape. I haven’t had this problem, but I can understand the concern. Additionally, the “fishing” line, if pulled loose, could also provide a swallowing danger. 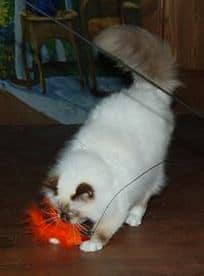