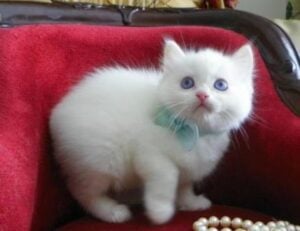 Teague as a kitten

Assateague Red AKA Teague. Teague was born in Landsdale, Pennsylvania to a ragdoll breeder. We already have a 4 year old Ragdoll, Rocky, who we thought needed a friend to keep him entertained. Our 14 year old Maine Coon mix just can't keep up with the shenanigans of a younger cat any longer. We then saw photographs of Teague on the breeders website, and knew he was the cat for us. We drove to the breeders from the Eastern Shore of Virginia to pick Teague up, and it was love at first sight. He was just a little ball of white when we brought him home, but we knew from his parentage that he was going to be a flame. Since he's a year old now, his coloring has really started to come out, and it's beautiful. 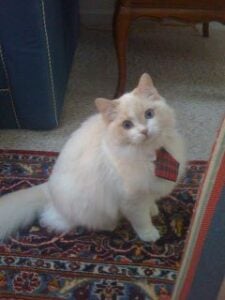 He's been quite the bundle of energy since we brought him home. He's always underfoot, he cannot stand to be away from people, which is wonderful. We wanted a lapcat, and we certainly got one. When he's not eating, or sleeping, he's either curled up on your lap, or bringing his mouse toy to you to play fetch. We throw the mouse, he fetches it and brings it back to you to throw again. (we've had dogs in the past, and none of them were this interested in playing fetch!) Our older ragdoll Rocky, is average size for a ragdoll male, and Teague is almost as big at just a year old, so we feel he's going to be a rather large cat. He just loves to play, whether it's chasing the vacuum as it's being run, or climbing over a baby gate to get where he's not supposed to be, and yes, I said climbing over. He's also fearless, we have a second story landing at the top of the stairs, and as we were watching television on evening, Teague launched himself through the railing on the second floor to the couch below. My mother almost had a stroke when he landed on her, but he was fine. Since then, we've discouraged him from going to the second floor as we don't want to risk him injuring himself by thinking he's the cat of the Flying Wallendas! He is a terrific 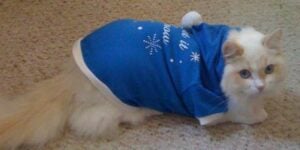 ambassador for the breed, his temperament is fantastic, and he does nothing but impress guests of ours with his version of the "ragdoll flop". Because several friends have had the chance to interact with him, 2 family friends are now owners of Ragdolls! Where they had never even heard of the breed before. He has become a playmate of Rocky, they like to wrestle and chase each other throught he house, over furniture (people in said furniture or not), etc. I think once he gets a little older, he's going to contest Rocky's Alpha-male status. He's definitely going to have the size to do so. In short, he's the perfect Ragdoll to encourage others to become interested in the breed. We will always have cats for pets, and thanks in part to Teague (and Rocky), a Ragdoll is the only breed we will ever have. Thank you for making this website available so others can learn of our breed and enjoy them like we do.