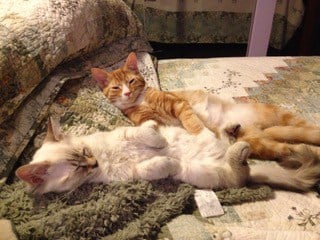 In May 2013, my elderly cat, Pepper died (she was 21). She acted like a Ragdoll. She flopped and hung like a Ragdoll, she was even tempered and was what I thought was a Ragdoll, until I began researching Ragdolls. After she had died, I wanted a ragdoll. 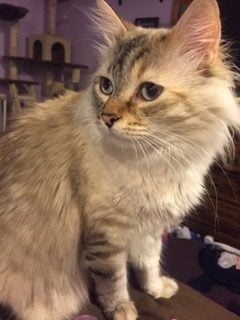 Two weeks after Pepper had died, I could not stand being alone any longer, and I went to PetSmart and found these two cats. I was drawn to the Ragdoll immediately. Then I saw her brother who had this swirl on his coat. The most beautiful orange cat I ever seen. I took them home that night. They were precious and beautiful. They were the only siblings that survived from their mother, who had also died. They were 16 weeks old and I was excited. Birthday Feb 28 2013. 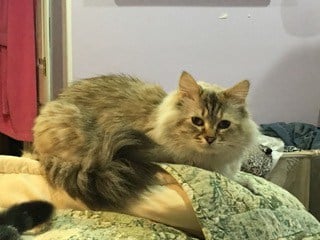 At about 18 weeks old, my beautiful Ragdoll, Tasie, was playing upstairs. I was in a cleaning mood and was cleaning the house. I gathered up bags of papers and took them to the trash. Then took the trash bin to the street. An hour or so later I began looking for my Tasie girl. I could not find her. I called outside, I called through the house, I looked everywhere. I knelt by my bed and asked God to help me find her. I got this knowledge that she was in the garbage bin outside on the street. I rushed out there. She was nowhere to be found. I cried thinking she was dead at the bottom of the trash bin. I tipped it over and pulled everything out. NOTHING. I walked down the street calling for my baby. I got inspired that she was the opposite direction. I found her across the street under a truck. I picked her up and carried her back to the house. I knew God knew how important she was to me and he brought me to her. I am thankful for that. 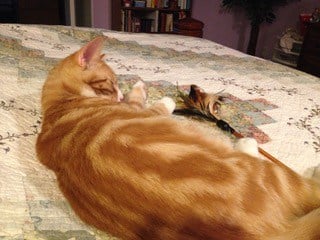 To this day, she will not let me hold her for long; she runs from things being carried in your hands, and she is very skittish. (I feel very guilty She is VERY shy. She doesn’t like her picture taken either, but I catch her sometimes.). However, she had her brother, Tye Dye, and they were inseparable. He'll exposed himself all the time, he loved having his picture taken. 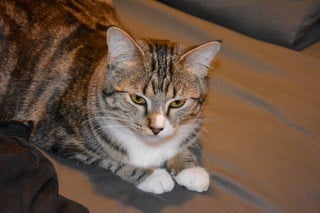 In 2016, Jan 4th, my baby boy got sick and began having seizures. The last day he had them, he had 17 in one day. I had to let him go. That was one of the saddest days of my life. He had not lived long enough, he was too young to have to die. 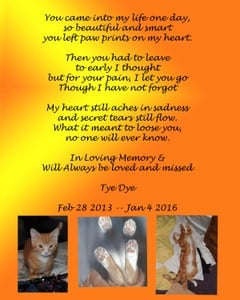 A month later, I felt Tasie was lonely. Though no other cat would substitute her brother, I found a cat that I felt would be a great addition. I met the woman from the local classifies. She had many cats and had to let them go because she was moving into a smaller home because she had breast cancer and couldn’t take care of them. I took her Princess. I named her Princess Houdini Shay Shay. Shay Shay for short. The reason the Houdini was because she loves to disappear. Vanishes outside. I do not want her outside because people on our street drive to fast and I have had to many cats ran over in my life. 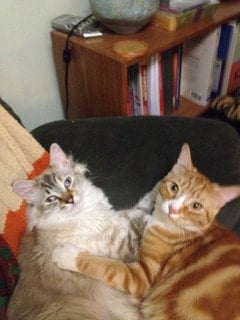 Yes, I am a crazy cat woman. Now I have Tasie (3 ½ years), my beautiful Ragdoll, I had her beautiful Marx Tabby Brother, now I have Shay Shay. (2 years old) I wanted to share these stories of three amazing cats, who started out because I wanted a Ragdoll. (She isn’t purebred, but she is beautiful! She has brown and orange in her.) 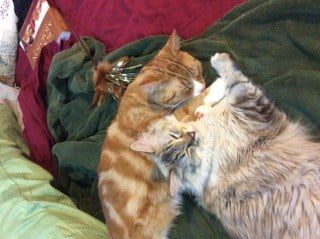 I used to watch this British show called House of a Nubus. One of the actors’ name was Tasie. I liked it. Tye Dye got his name because of his swirls on his coat. I feed my cats Blue Buffalo Adult Indoors. I got a bed for the Kitties, Thermal Warming Pad for Dogs and Cats - XL Couch Protecting Pet Bed (Beige) it has a warming insert then I got Easyology Premium Pet Cold Gel Pad - Perfect Size For Couch- Keeps Pets Cool -Fits The Easyology. Premium Pet Warming and Cooling Pad (Pink) as a cooling. I got this bedding for their emergency kit. If any emergency happens, they will have bedding to take care of them. I did some sealed bags of cat food and treats for them as well. I got Tactical Waist Pack CREATOR Portable Fanny Pack Outdoor Hiking Travel Large Army Waist Bag Military Waist Pack. I believe in being prepared, and that means being prepared for your pets as well.Do you have a Floppycats Kitten or Cat?  Consider submitting your kitty!  Floppycat of the Week submission guidelines