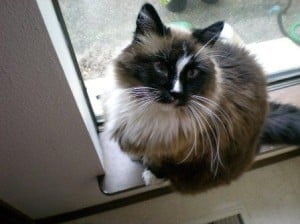 Tasha was a mitted seal point Ragdoll mix I adopted from the Seattle Animal Shelter in 2003.  She wasn't quite 5 years old yet.  Her previous people had surrendered her as they were divorcing and moving out of state.  Although I was always mad that someone would surrender a pet because they were moving, as my mom frequently reminded me, their loss was my gain.  I lived in a small duplex at the time.  When I brought her home, she immediately started carefully exploring.  She found her litter box, food and water and we settled in together.  Several people asked if I would change her name.  She knew her name and answered to it when I brought her home and it seemed to fit her, so I opted not to.  She found that I sleep on my stomach and so sleeping on my back was warm and she knew if I was gonna move or get up.  She wasn't a lap cat immediately, choosing to curl up beside me if I was reading or watching TV for about the first year.  After that, laps were a great way to ensure that I stayed in place and didn't go anywhere! 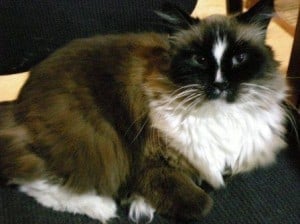 Tasha, like so many Ragdolls, seemed to feel that I needed constant supervision.  If I was in the bathroom, she was in there too.  I can't tell you how many times I had to contort myself, carefully, getting out of the shower, because she insisted on sitting where I would logically step out.  Sometimes I could nudge her out of the way, sometimes she stayed put.  As she chin rubbed the small trash can in the bathroom, it was never exactly where I last saw it and I always had to look to drop something into it.  As a concession to her, I gave her most of the space on the cedar chest doubling as my coffee table, keeping a tiny space to one side for my books and a remote control.  These too were often chin rubbed off the side of the table and onto the floor.  All the space was hers! 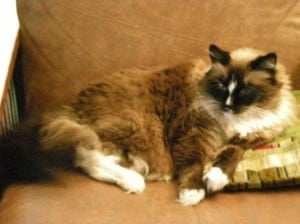 While I believe her previous people treated her well, I don't think they played much with her.  I brought home numerous toys over the years and tried to engage her in play.  She mostly watched me for a bit and then walked away.  I found that she did like to chew on plastic - just chomp up and down on it.  While she never tore little bits off to eat, I worried that she might accidentally ingest some anyway, and did my best to keep it picked up or put away.  She did get into a few of the little bags I use to organize my embroidery floss for cross stitching - something else to remember her by.  Having discovered her fondness for plastic bags, I thought she might like it one afternoon if I tied a sandwich bag with a piece of string and pulled it for her to chase.  She did chase it, but she was much more interested in the loose end of the string I held.  I finally reversed the ends and held the end with the bag tied to it.  She seemed to think that chasing the end of the string was about the best thing ever.  I pulled it up into her kitty tower and she followed it up there, picked it up in her mouth and carried it back down to the floor.  She did it that a number of times, but I was never able to get a picture.  I wish I had been able to as it was one of the cutest things! 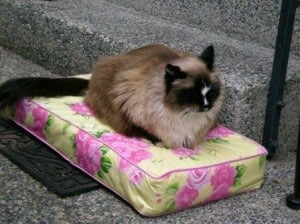 In 2006, I moved into a 3 bedroom condo that I share in the summer with my parents.  Tasha seemed to enjoy the extra attention although as Dad stated, I was still her personal human!  Dad had fun feeding her a few treats every day and often threw them a bit for Tasha to chase.  Our entry area has marble tiling in it, and with her toe tufts, her traction when she was moving faster wasn't the best.  Going into what my Dad termed a "four-paw-drift" on the tile while chasing treats was fun to watch.  Mom didn't work as actively to win Tasha over as my Dad did, but she had the lap of choice if I wasn't home.  Mom's chair was also a favored napping spot when they were home.  If Mom got up, Tasha would immediately hop up into the chair and settle in.  Sometimes, Tasha waited until Mom was headed back to sit down and then race to the chair ahead of her.  Mom was amused and a little put out that Tasha only wanted the chair when she was home.  When they left for the winter, Tasha lost interest in the chair as a sleeping spot. 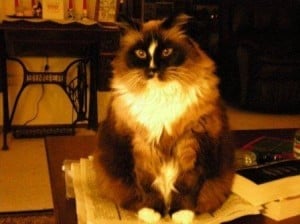 One of the features of my condo is that it has a little outdoor courtyard.  The courtyard is bordered by the back of my garage, the exterior wall of the unit next to me, the front of my condo and an 8 foot brick wall and gate.  There are several flower beds for me to play in, but they aren't so big that they aren't a lot of work.  Tasha got to enjoy coming outside with me while I worked in the courtyard or sat outside to read and take advantage of our summer sunshine.  She was almost completely oblivious to the hummingbirds that scolded her for being near their feeder but loved watching swallows swoop around in the evening.  She walked carefully on the concrete, and as far as I know, never once dirtied her snowy white mittens in the dirt in the flowerbeds.  My mom and I made some cushions that fit on the stairs outside the doors to sit on and she felt that these were just perfect for her to rest on as well - far superior to cool, hard cement!  Her last summer with me, she was comfortable enough in the courtyard that she pawed at the door a bit in hopes that she could go out.  Sometimes I was around to supervise such an outdoor visit and sometimes she had to wait.  One day she was insistent on going out while it was raining.  I finally opened the door for her and she got down the two stairs and into the rain, where she turned around, gave me a horrified dirty look, and came right back in! 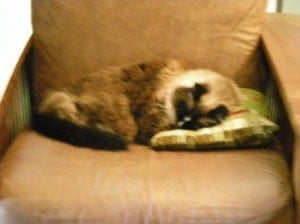 At the beginning of 2012, I found out that her kidneys were beginning to fail her.  Her vet and I tried several different foods for cats with kidney problems, all of which she turned her nose up at.  Rather than constantly battle with her regarding food, and after several discussions with her vet, I decided to feed her whatever it was she would continue to eat, understanding this was going to hasten the decline in her kidneys.  I had to say a final goodbye to her right before Halloween in 2012.  She is dearly missed.