Snowdolls Tiffany - A Chocolate Mitted with a Blaze Ragdoll Cat 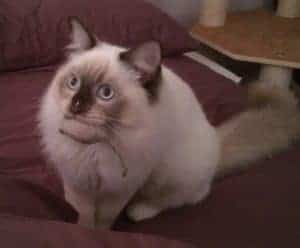 Tiffany playing fetch with her mouse.

Hi everyone, my official name is Snowdolls Tiffany. Mummy named me after Tiffany & Co because I have a little diamond size blaze on my nose. I am the only one among my 3 other siblings born chocolate mitted with a blaze. I flew over from Australia with my sister Éclair, it made the scary flight less daunting flying with my sister. My aussie mummy Carola (Snowdolls Ragdolls cattery) also flew over to ensure that we settle properly into our new homes. Carola is an awesome breeder and takes such good care of all of us!

At my new home, there was already another older ragdoll cat, Snowdolls Houdini aka Harry (Ragdoll of the week too back in 2015). Harry didn’t like me at first; he kept hissing at me and trying to attack me even though mummy slowly introduced us over a week. It took another week before harry allowed me in the same room under her supervision, and another few weeks before mum trusted us to be together alone. Now we get along ok, we can even eat from the same bowl if need be, usually I push Harry out of the way. 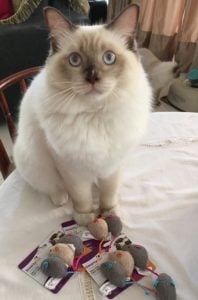 Although I am the smallest among my littermates and still small for now, I have a BIG appetite; bigger appetite than Harry which means I get extra servings each meal when harry does not finish his food. Mummy calls me “pudgy” or “buibui” which mean “fatfat” but she is so relieve I eat like a piggy because harry eats like a bird (My biological sister who is more than a kilo heavier than me is another little piggy nicknamed Eclipse instead of Éclair).

When I turned ONE on 3 September 2016, mummy bought me a little cake which I couldn’t eat, but I had extra helpings of my favourite raw quail and venison. I am totally raw fed and so is my brother Harry. Mum turned to raw because she had a hard time settling Harry’s sensitive tummy with commercial food (both dry and can food) and the mixture of stuff in it, so she feeds us raw so she can control what we actually eat and slowly my brother’s tummy got better. To keep things simple, I too get raw food with supplements. Since my tummy is stronger, I get a variety of raw meat too: quail, beef, venison and occasionally rabbit (I tried duck and it is yucks!). I like crunching on raw quail bones, I’m a true hunter! Hear me MEW!!! Whereas my brother harry only eats minced quail, *mew-whimp-mew*! Although we don’t have sensitive whiskers, we use the Dr Catsby Whisker Relief cat bowl because it is good quality stainless steel metal and mummy sterilizers our dishes and utensils with hot water each time before use (raw food & harry’s sensitive stomach, mum is paranoid). 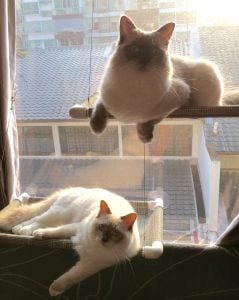 Harry (top) and Tiffany (bottom) on the Kitty Cot.

I like getting combed and will run from wherever I am when I hear mummy clicking the metal comb against her ring (mummy uses it to locate me when she’s too lazy to check behind all the curtains and all 3 stories). I like getting combed so much I will push my way between harry and the comb or just squeeze next to harry who then walks away…he really does not like being close to me...i wonder why. Well good for me, I get more combing time and I purr really loudly too while being combed. Unlike harry who hardly sheds, I shed constantly. We have different coat types, mine is shorter and denser, whereas harry’s coat is longer and less dense. When I see mummy taking out the toothbrush…I run too…but away from her!

My favourite toys are the SmartyKat Skitter Critters Cat Toy Catnip Mice. Being the true hunter that I am, I love to chase mice around and I play fetch too! Mummy throws the mice and I catch it and bring it back to her. For my birthday, mummy bought me lots and lots of mice. In total, there are about 21 mice in the house, just that I’ve hidden them and forgotten where..opps! Occasionally the family finds a mouse in their shoe or our water fountains, it’s not my fault, I just got tired and took a kitty nap and forgot. I sometimes stash a few mice on mummy’s bed so that at 5am when I’m awake and bored I can pounce on her comforter and catch the mice…usually I miss and end up catching mummy’s toes instead! 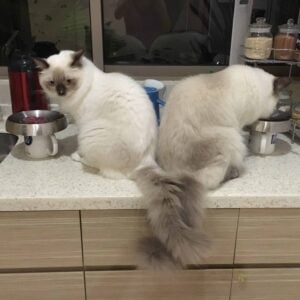 At night, when it is time to go up to the room, Harry will wait at the lift and walk in calmly (humpf! That goody two-shoe). Me?…I run off at top speed so mummy has to chase me all over the house and carry me into the lift. When the lights go off though, I will jump up and sleep on the Original KITTY COT "World's BEST Cat Perch". There is one for Harry and one for me, but I like to sleep with him; Harry doesn’t like me coming so close, so Harry jumps off and sleeps on mummy’s comforter instead, and mummy squeezes to the side of the bed. Again, it really isn’t my fault...plus it just means I get to sleep on both *grin*.

Occasionally we play rough and mummy intervenes; usually it is when I’m bored and decide I want to play. I like to hide and stare at harry whose sound asleep belly up, then I wiggle my butt, and pounce and sit on harry’s face. Poor Harry gets a rude shock and ties to bite me and we start a game of chase around the house. As Harry is still bigger in size than me, I usually get cornered and mummy has to come rescue me. Both of us get scolded. Mummy says I look innocent and mew sweet like an angel, but I’m actually the total opposite. 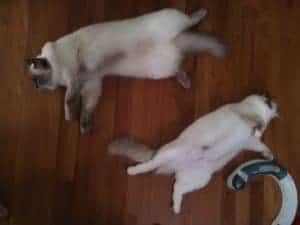 Belly up…brown spot on tiffany’s tummy when she was younger.

Despite the mischievous terror that I am, I am really mummy’s girl, when mummy is out of sight, I will mew my lungs out non-stop and go searching all over for her; I also mew and wait outside the door for her when she’s in the toilet. I have yet to master pushing open doors and if I can’t fit through the gap, I just sit and mew for someone to open it…unlike harry who is an expert at pushing or pulling doors open. During the day, I will sleep next to mummy too while she works on the computer or while she takes her afternoon nap, and after dinner I sleep on the sofa with the family while they watch TV. I will usually sleep with one paw touching someone so they can’t sneak off without me knowing. 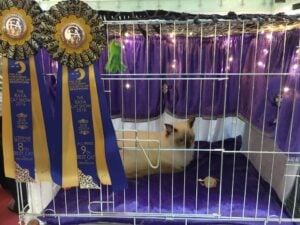 Did I mention I am also a show cat and won 2 ribbons at my first show =). It was a few months ago before my colours came out, so for a while I had a brown patch on one side of my tummy and was marked down for that but still the judge gave me 2 ribbons. Now the brown has darkened and my white stripe from my chin to my belly can be clearly seen, my mittens are also showing up nicely with the contrast.

Harry and I get quite a constant stream of visitors too, usually family friends (or friend’s friend…) who heard about us and love coming over to play with us. Mummy thinks it’s good so we aren’t scared of the judges at the cat show. Harry and I are very sociable and we give our visitors the ragdoll temperament treatment, doing our breed proud - I even gave the baby a kiss. Mummy makes everyone disinfect their hands and feet first before coming into our day room. She sometimes jokes that she should start charging visitors an entrance fee to fund our upkeep like those cat cafes =). 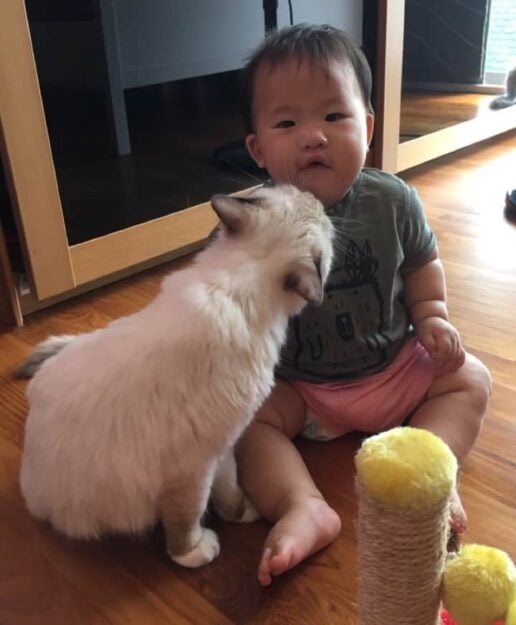 Tiffany greeting on to the visitors. 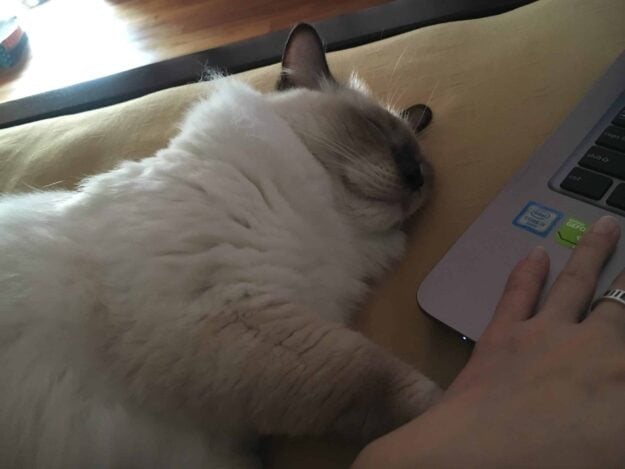 That’s all folks, it is time for my kitty nap. You can continue to catch us on our facebook page.