Hello, Ragdoll parents, my name is Tomomi, I live in Tucson Arizona with my husband Mike and 3 kids, Tabbi Scarface, Blue, and Snow.

Today, I would like to introduce our Snow, mitted blue Ragdoll, Blue’s mother to you.

I strongly believe Snow was supposed to come to our house although it was not planned. 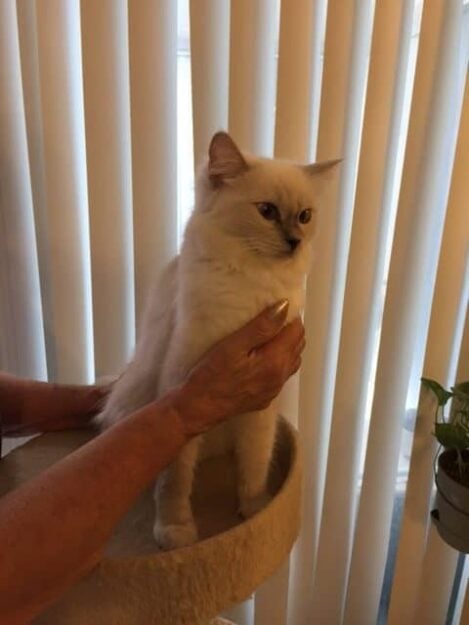 She was born on 6/11/2014 at Janet Barry’s Ragdoll house in Phoenix Arizona, and came to our house when she was 2.5 years old. (we kept her name Snow)

When we picked up Blue in Nobember 2015, Janet showed us his father Buddy, and Mother Snow.
To be honest, I fell in love with her beauty and elegance, and I wanted to bring Snow home instead of 3 month old baby Blue!
She was gorgeous, and I could easily tell why Janet kept her as a breeding cat. 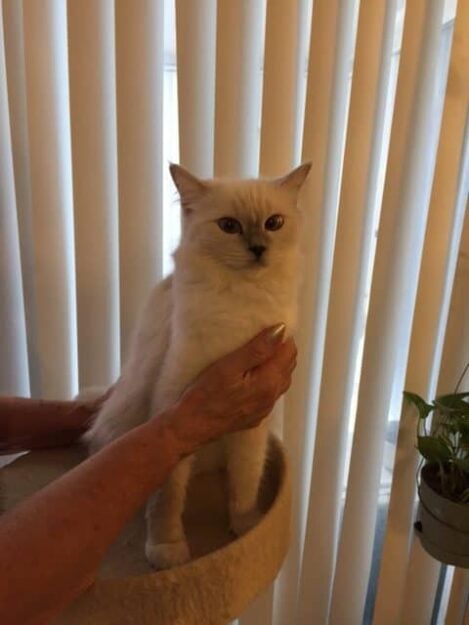 Almost a year after we had Blue, my husband happened to see Janet’s website stating she is closing her Ragdoll house, and he told me about it!

Right away, I contacted Janet asking where Snow went. She said “Snow is now at other breeder’s place to see if she is compatible with other cats and the place, but if you are interested in, I would like you to keep her. “

Oh my goodness!!! I was so happy to hear that Snow may come to our house!!! But now I had to convince my husband to have another cat, a total of three in this house….

He has asthma, and it’s never good to keep hairy animal inside the house. But I was desperate to welcome Snow. “ Darling Mike? Do you remember Blue’s mother Snow? She was such a gorgeous lady wasn’t she?? “

Here it comes again, Mike thought. “Ragdolls don’t shed like Scarface, and it may be good to have Blue’s mother so that Blue will have a company. I promise I will keep our house always clean.” 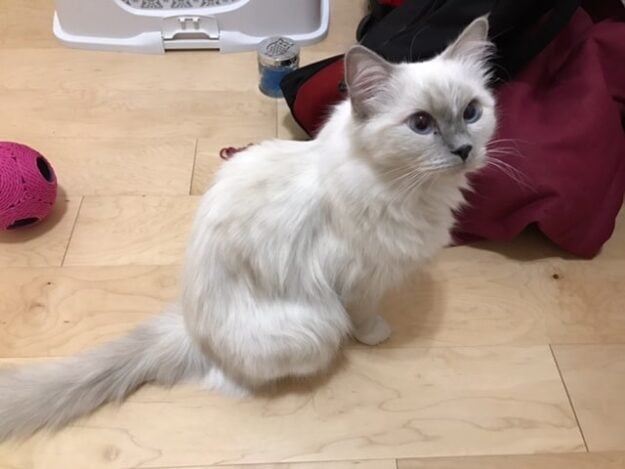 His answer was no! at first, but he was generous enough to accept my request at the end.
I truly appreciate his understanding. Thank you Mike!
He travels a lot, and I used to feel very lonely when he was away, but now I don’t, as three of my kids keep me busy all the time.

In my mind, Snow was gorgeous, beautiful cat. But when we saw her in November 2016 to pick her up, she looked like a different cat. I was very shocked! 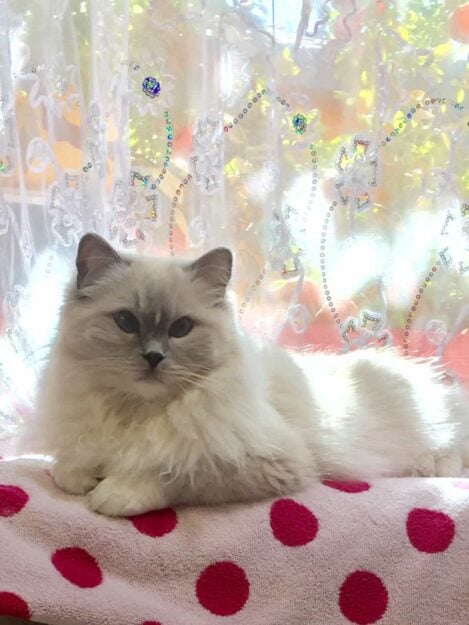 She was very skinny, afraid of people, her fur was not smooth, patchy with small round brown substance here and there in her fur.

Moreover, when we compared with Blue, she was 1/3 of his size… I just couldn’t believe she was the same Snow.

I was also surprised to see Snow’s birthday as she had Blue when she was one year and two months old! And it seems like she had another litter before she came here.

I assume she was not compatible with other breeder place as Snow avoided us for a month, and I could tell she was scared of people.

Slowly and gradually, she started to open up, and relax at our place. She was always with Blue, her son, and I am sure Blue’s existence was a big relief for her. Since Snow became fluffy, I often get confused which is Blue or Snow. 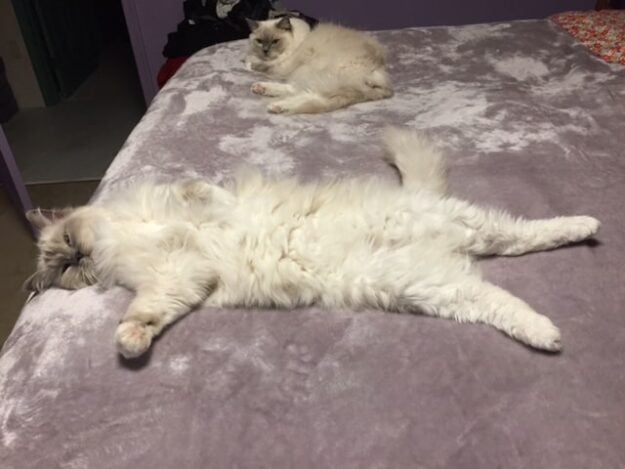 After 6 months she came, she started to look like a different cat again. She is the sweetest, beautiful, and elegant lady I knew.

Now, she follows us everywhere together with Blue, to the bath, to the toilet, and wakes me up early in the morning so that she can have some more shredded bonito, and go out to the yard. 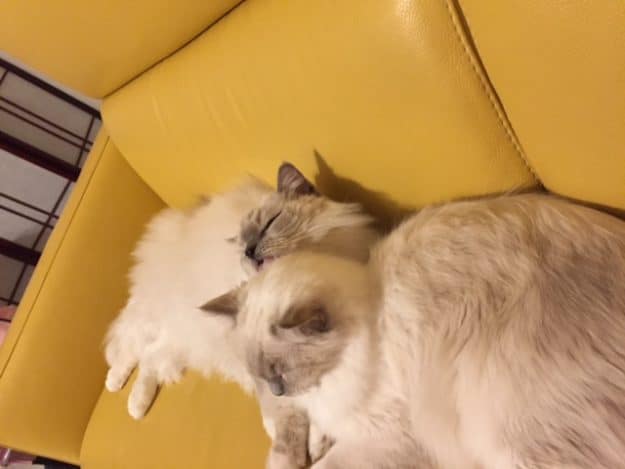 Both Snow and Blue has cute mewing voice, and Scarface started to imitate their voice. But it doesn’t last very long for Scarface as it’s not her original voice.

When Blue is locked out, Snow mews and let me know that he is still out.
She senses things fast, very smart, alart and athletic. When I play with ropes, or moving mice, she is the one who gets it first, and never let it go.

She wants me to watch her eating. When I leave, she stops eating.

Although she is the sweetest and the most elegant and quiet of all, she is stronger than anybody else. 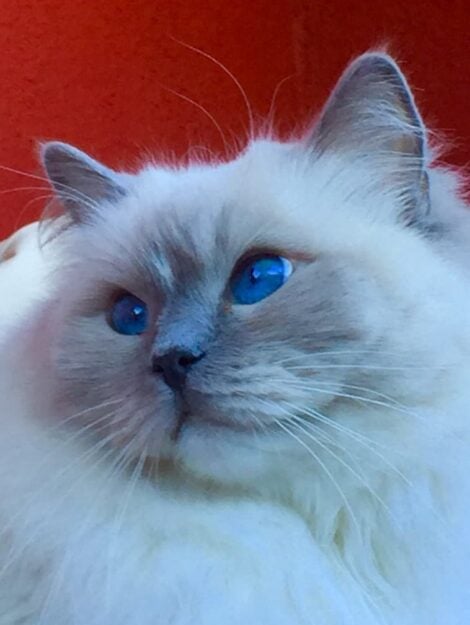 When Blue does something Snow didn’t like, she gives this sharp gazing! Blue try to attack her, but can’t as he is scared of her angry eyes. I posted a video on You Tube
“Blue’s mother is stronger! “ and it’s hilarious.

Because of her mellow temperament, 3 of their relationships improved dramatically.
Scarface hates Blue, but she is ok with Snow.
I thought different sex would get along together better, but not in our case.

Life is unexpected and beautiful.
If Blue was not here, Snow wouldn’t have come here either.
My husband still wonders why the Ragdoll site was opened on his computer, and why he saw that info and told me! (big mistake for him!) On the same day, I was buying extra large litter box for no reason. 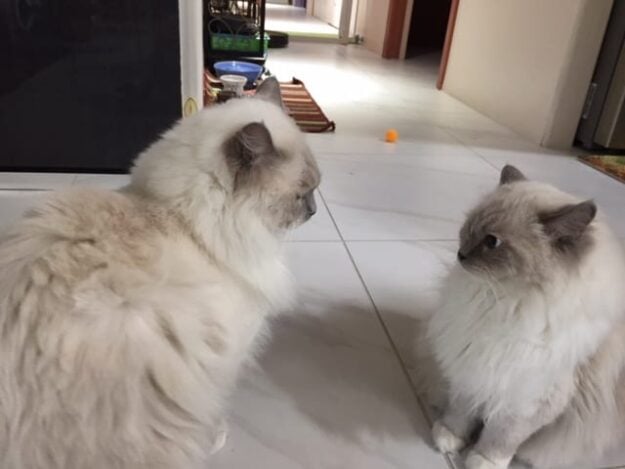 If it was a month later, probably, Snow would have stayed at another breeder’s house. Everything happened in a right timing.

When I see them together, they really look alike. Watching them grooming and playing each other, sleeping together, I feel very happy that Snow came to our house, and I am truly thankful for Janet for trusting me to have Snow. It’s been really wonderful to see Snow change, and I strongly feel everything was meant to be.

All I wish for them is to have healthy happy life together for a long time. 

Thank you very much for reading.

One thought on “Snow – Ragdoll of the Week”