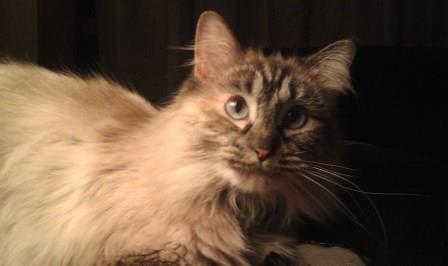 Here is our beautiful seal torbie point, Sky.  Sky was abandoned by her former family in February when they moved.  When they left for their new home, they left Sky outside in the middle of the second-snowiest winter in recorded history where we live, in Columbus, Ohio.  Not only did they abandon her outside, but they had declawed her at some point previously.  I don’t see how she could have survived, except for a good Samaritan who came to her assistance.  A neighbor caught her and brought her to a shelter.  When I saw her on the shelter’s website, I was immediately captivated by her unique beauty and soon went to the shelter to meet her.  She was very frightened and shy, but still wanted human contact.  I fell in love with her immediately. 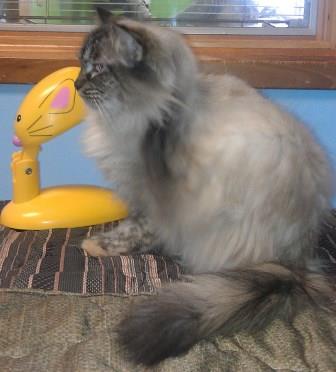 The shelter gave her name as Queenie, but she didn’t answer to it, so we re-named her Sky because of her eyes.  The first few weeks we had her, Sky mostly hid in the back of a closet.  She doesn’t like to be picked up at all—I suspect she was mishandled a lot in her past—and she was terrified of dogs (I've included a picture of when she first met our 16-year old husky mix).  She may never follow us around the house, as in “classic” ragdoll behavior, but she loves to sit on the back of the couch when I am sitting there, and lately she has started to sit next to me.  She also enjoys lying in bed with us.  Though she is still skittish at movement, especially sudden movement, she can’t seem to help wanting to be near us when we are still—and she is starting to purr a lot!  She really enjoys being pet and scratched on her head, and she is willing to play when invited, and has even started to chase the early spring flies.  She also loves laser pointer lights, shoe strings, and balls.  I can see the beginning stages of self-confidence and friendliness starting to appear.  We are being patient and gentle and predictable with her as she learns to trust us.

The shelter’s vet and our vet both agreed that she has probably just reached four years old.  Our vet said she has a slight hernia from her spaying.  Poor Sky.  It seems she didn’t have much luck in her life before she met us.  But that is definitely changing for her now.   She is getting plenty of love! 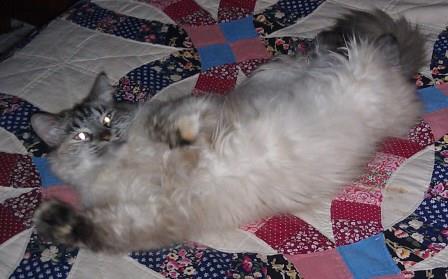 Since she was a rescue cat, we will never know her lineage for sure, but her coloring, her long silky coat, her floppy nap-time pose, and her ice blue eyes definitely speak of ragdoll influence.  It’s hard to find pictures of seal torbie point cats online, but in my opinion that is the proper name for her coloring.  She has a lynx face, a cinnamon nose with a dark outline, white “eyeliner,” and mottled paw pads.  She has tortie coloring on her legs and the back of her ears.  I’d be interested in the opinion of others as to the description of her coloring, and the likelihood that she is at least a ragdoll mix.   Most of all, though, I’m glad she found a home with us. 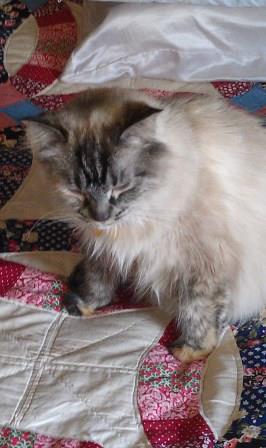 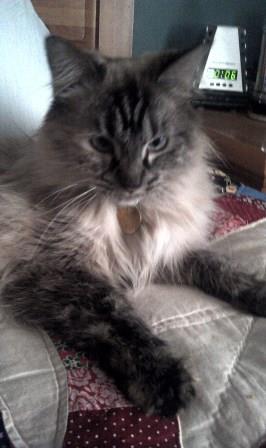 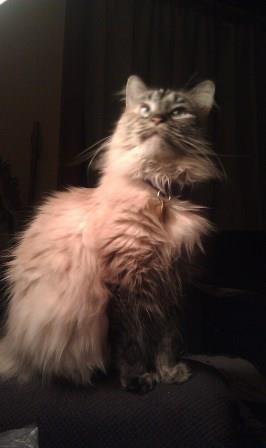 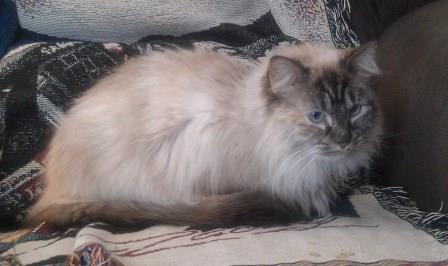 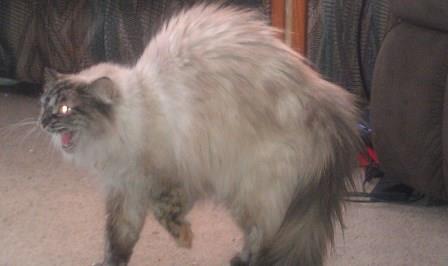