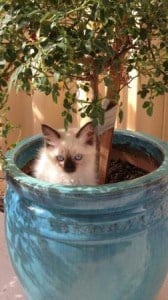 My daughter also loves Ragdolls and wanted one for her 16th birthday so I went online (Gumtree) to find a registered breeder, I am not very experienced with this sort of thing so I found someone who claimed to be a registered breeder but now I know from talking to other Ragdoll lovers that she probably was not, I never received any papers. It does not matter though because she is a beautiful little girl with lots of character. My daughter called her Sky because she has beautiful blue eyes of course.

She was born in December last year and is 10 months old, she is quite mischevious and loves to annoy our other 2 cats, Sky loves a cuddle in the night and will quite often jump onto the bed and want to get under the quilt. Her favourite game is to hide behind the lounge and jump up and scare you when you sit down, she loves chewing on your 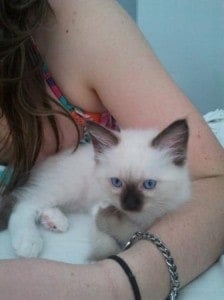 hair when it is wet (disgusting I know).Sky will often follow you around the house, she does not like to miss out on anything, even when going to the bathroom she tries to get in. She loves to roll in the dirt and has quite alot of baths because of it.

My daughter absolutely loves her and gets a bit over protective of her when other people want to pick her up. She always says that Sky is the best present she has ever got. Sky also has a nickname, it is Skulky, not the prettiest name but it does suit her because she always looks like she is skulking around. When we first brought her home her face was white but has got quite dark now so it will be interesting to see if her body gets darker as well. Sky is a fussy eater and I have tried so many different things to give her, I worry more about what to feed her than my own children. 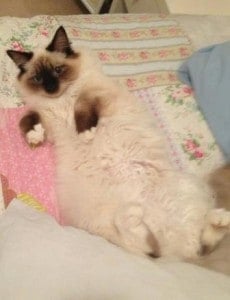 My male cat which is quite a large cat( 6kg) loves to play with Sky, she loves practising her ninja moves on him and has a pretty well executed roundhouse (I am not kidding), this cat was a martial arts expert in a past life. Sky is petite but has pretty big paws so I am presuming she will get bigger, I have read that they keep growing for 3 years.

Anyway I hope you have enjoyed Skys story, she is a special part of our family, even my husband is completely smitten with is kitten lol. 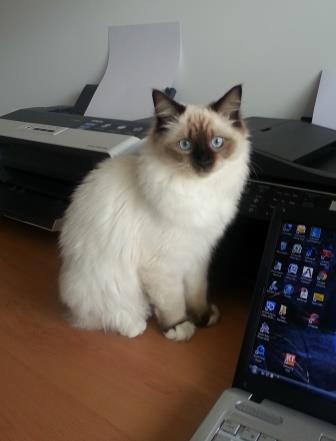 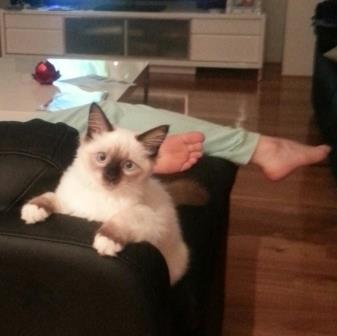 6 thoughts on “Sky – Ragdoll Kitten of the Month”