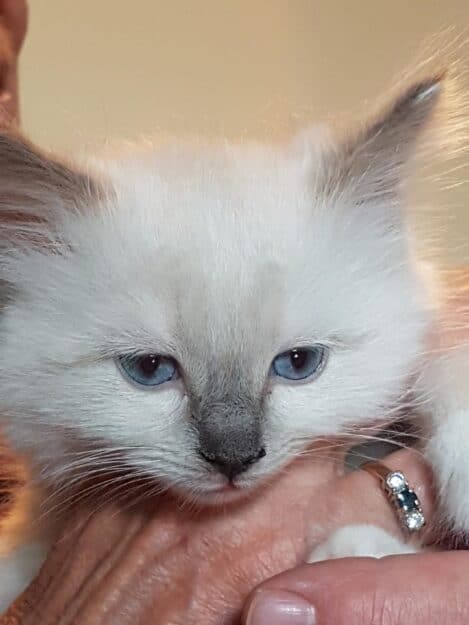 Meet my kitten, Sir Oliver. He was born in Delta, British Columbia, Canada on March 11, 2018 with IzzAdorable Ragdolls cattery. I have an eight-year-old seal bicolor Ragdoll named Zak who I decided needed company. While Zak is not keen on sharing a bed or bench with Oliver, I do think they are company for each other. Upon arriving in my home, Oliver has been bold, curious and such a charmer. 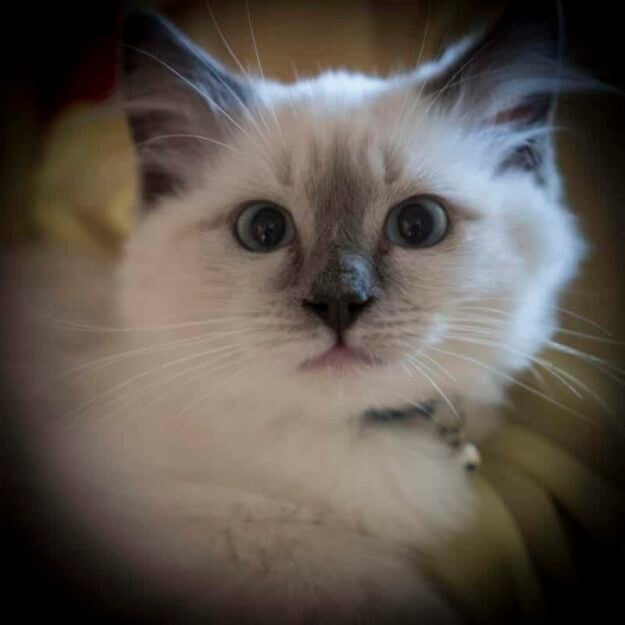 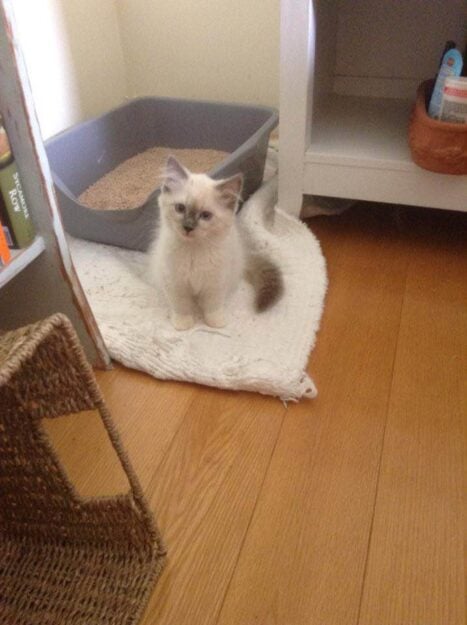 In essence, Oliver chose his name. I had a list of names I said to him and when I said Oliver, he perked his ears and looked straight at me, which I think told me, Yeah, I like that name. While Zak likes to be near me, typical of a Raggie, he is not a lap cat. To my absolute delight, Oliver does like to cuddle and my favorite times are in the morning when he's eaten his breakfast and then jumps into my lap for cuddles, settling himself on top of my arm. My plushy house coat is full of snags from his kneading but I don't care. He will also cuddle with me in the evening while I watch TV. 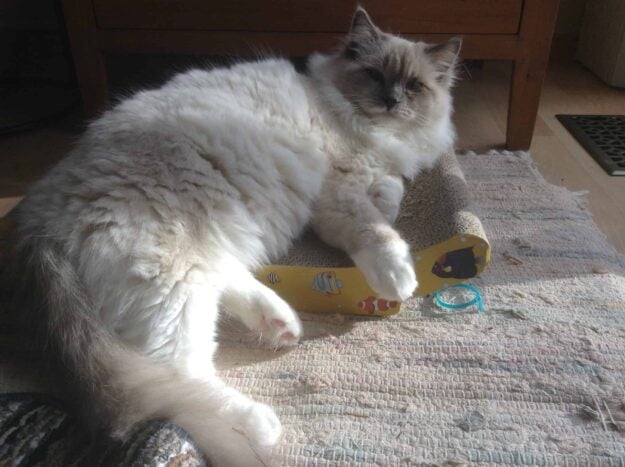 Since I brought him home, Oliver's breathing has been shallow and rapid, three times more than normal. To find out the cause, numerous appointments to the vet were required and as I live car free, I needed to find a way to get him to the vet, just a 15-minute walk from my home. I found the solution in a pet stroller which after some adjustment, he loves. One of our routines is a stroller ride around the neighbourhood. I get out the stroller and ask “who wants to go walkies” and he will run and leap into the stroller. He has learned to walk on a leash and he walks around the back yard, exploring everything in sight. 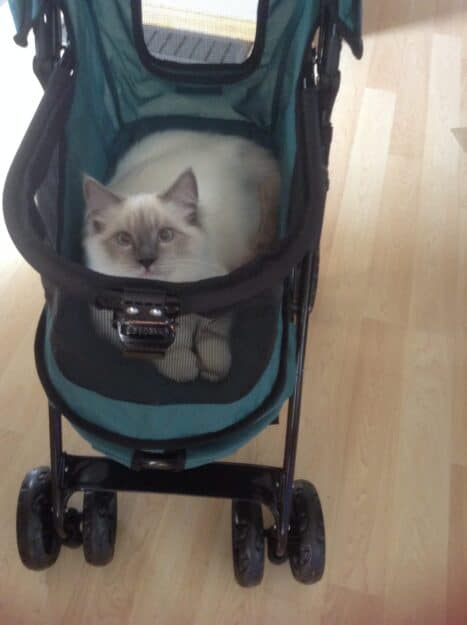 We have yet to determine the cause of his shallow breathing but his recent medication of steroids has brought his breathing to normal. In the next couple weeks, his dosage will be reduced and I will determine what the next step will be. I am grateful that he is easy going so giving him a pill is not difficult. 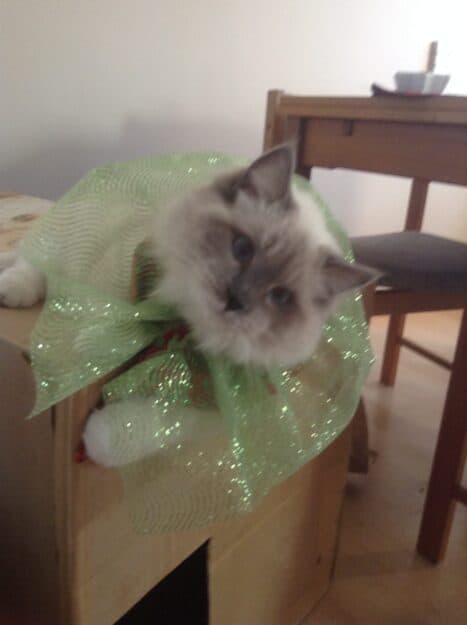 Oliver also likes to be out on the gated deck of our home, watching the squirrels and birds that are in a green belt in the back yard. As for toys, his favorites are those plastic coils, crinkly balls, tissue paper, a chord from a curtain tie back and feathers. He is a very fussy eater, eating only dry cat food. Thankfully, he drinks lots from the cat fountain. He will gobble down “Purebites”, freeze dried treats and is learning to shake a paw for his treat. I intend to teach him more tricks such as doing a high five, which Zak does. 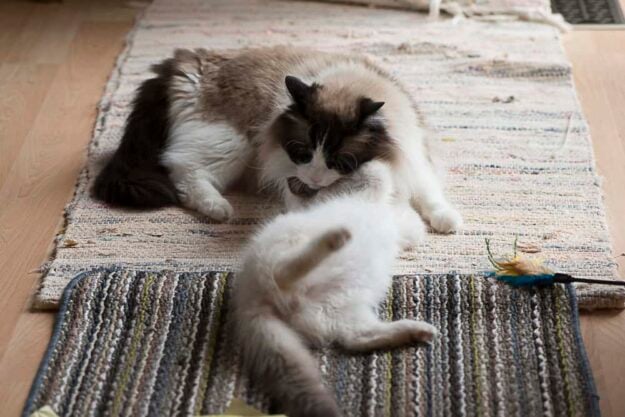 At almost 11 months, Oliver weighs 13 pounds, a big boy, now heavier than Zak at 11.5 pounds. As he has aged his fur has become so soft and fluffy. He will tolerate brushing which I try to do daily. 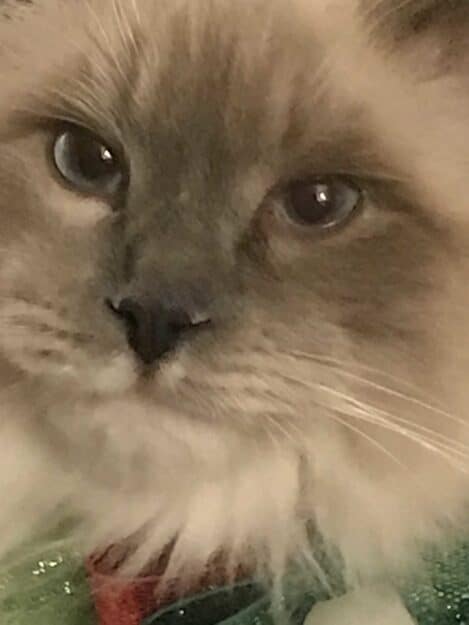