I bought him from a breeder in England as I am English when he was 13 weeks old.

I decided to get a Ragdoll for a few different reasons. 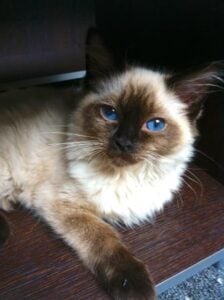 Firstly I really wanted a cat as I have grown up with cats and I hadn't had one in a while. My first two cats were Persians and my other two who live with my mum are Siamese.

Secondly, when I was a kid there was a flower shop in my neighbourhood that had a very beautiful fluffy Himalayan cat that always sat among the flowers. I always said that one day I will get a cat like that. When I decided it was the right time to get a cat I searched for Himalayan breeders in the UK but I was unable to find any. I had never heard of a Ragdoll until I was searching on the net for a Himalayan! When I saw that Ragdolls come in the same seal point markings as the Himalayans did I was very excited as there are plenty of Ragdoll breeders in the UK. I searched for Ragdolls for sale and I came across Simba's photo and I instantly fell in love! 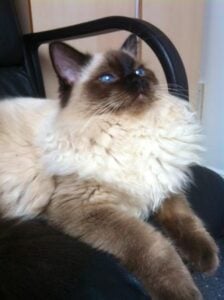 The third and final reason for getting a Ragdoll was the character traits of the breed. My partner has never had a pet an was adverse to having one for years. After reading about how placid and lazy Ragdolls are I thought that was perfect for my partner. He would have to deal with a pet that was full of energy trying to climb on him etc. Needles to say Simba has won him over and now they are best friends!

Simba is a typical Ragdoll. He moves with us from room to room; he always wants to be around us. He is very placid and relaxed (goes limp) and very lazy although he does have his crazy race horse moments! He always greets us at the door and he is very vocal about letting us know that leaving him at home alone was absolutely unacceptable! We use to think he was meowing for food but we later realised that he wouldn't eat unless we gave him a proper greeting and cuddled him! Although he likes to be cuddled he doesn't like to stick around for very long. He is always close but rarely on us unless he decides he wants attention. When we wake up in the morning he comes from wherever he is lying to greet us and expects a good morning cuddle. If I turn the shower on he likes to come and sit outside the shower. He plays fetch and he lets us know when he would like to play as he normally rings a ball/pen/q-tip (his favourite) and puts it in front of us and waits. All in all my Simba is a little character who entertains us immensely and I absolutely love him to bits. I wouldn't change him for anything in the world and now that I have had a taste of what life is with a Ragdoll I will definitely be getting another one! 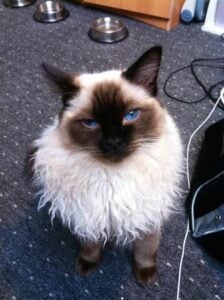 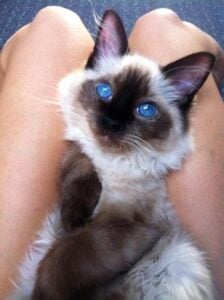 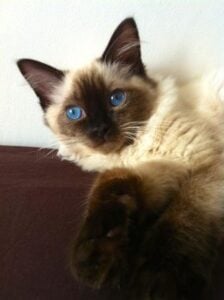 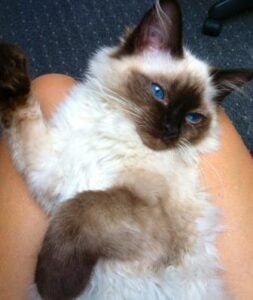 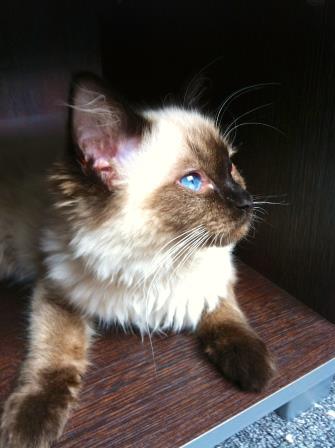