×
Home » Ragdoll of the Week
Hello. I’m Leah. My husband Chris and I adopted two ragdolls, our first of this breed, on February 26, 2018. The “guys”, as we refer to them, are brothers and were born on November 27, 2017. Sidney is a mink blue colorpoint and Linus is a traditional dark blue bicolor. Sid came to us with very blue eyes that have since changed to more of a sea green and Linus had darker green eyes that have now brightened to a light olive-gold. 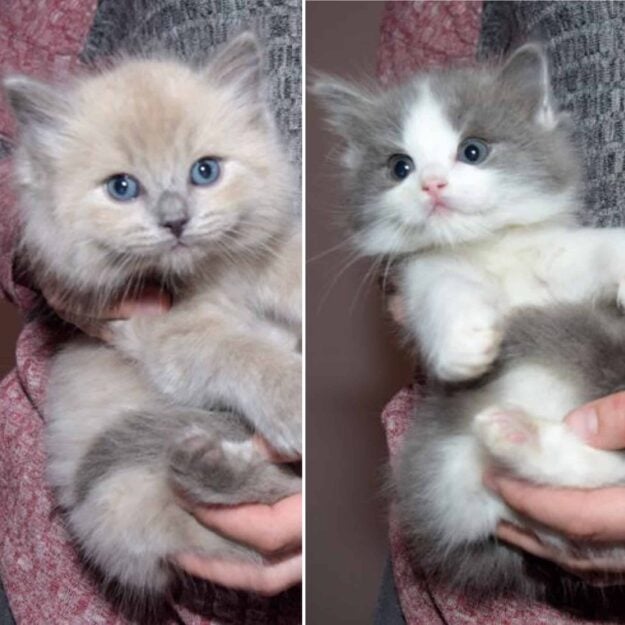 We had a good, albeit limited, experience with our breeder, Fancicat Farms. We were not able to visit the kittens prior to adoption, but were provided pictures.In December of 2017, we lost our 18 ½ year old cat Delilah and I felt a huge hole in my heart and home. In searching for kittens to adopt, I stumbled upon Ragdolls based on their personality and puppy-like antics. 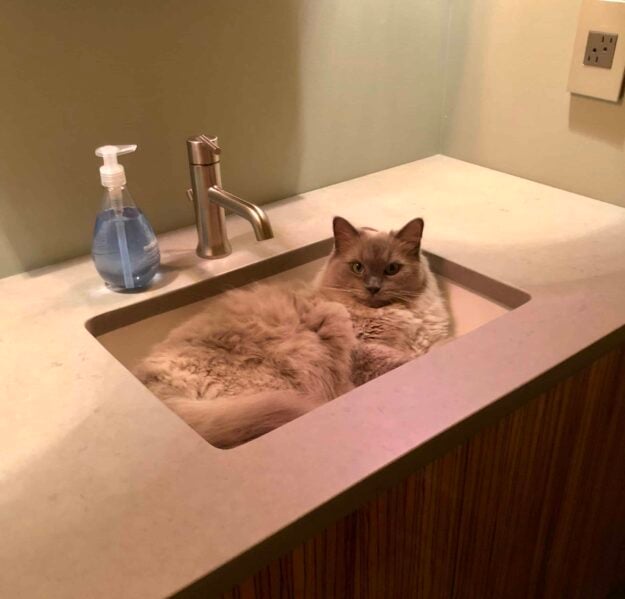 Sid(ney) is somewhere between laid back and a bit neurotic. He obsesses over closed doors and scratches at them a lot. He likes to jump up on all things high…he has quite an incredible vertical leap for his size. Because of this, he is often the one that knocks things from high places for his brother to play with! They are always up to no good! However, within minutes he will be sprawled out on the floor with one paw tucked looking like a walrus. Sidney loves kibbles and tolerates canned food. He has a habit of showing up toward the end of my daily workout and demanding I scratch and pet him vigorously until he deems I am finished. His favorite spots to snooze are Chris’ leather chair, any and all corners, in between us on the bed head on my pillow and in the hall bath sink. 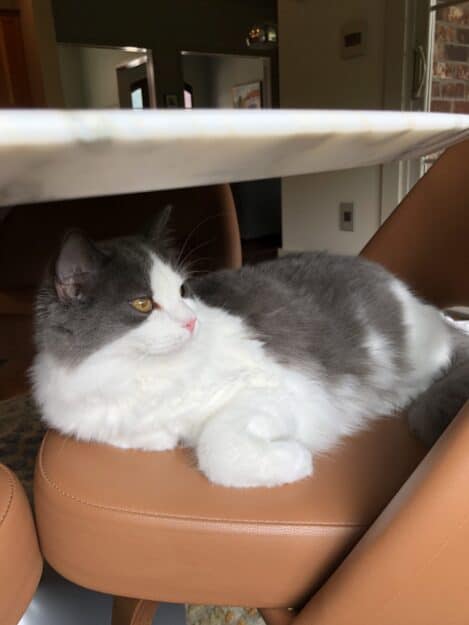 Linus is a bit higher strung. He is not such a great jumper and has only recently learned that he has the ability to actually leave the ground on his own. He has fantastic facial expressions and his olive-green eyes are always tracking something. Linus loves chasing the red laser until he is quite literally panting, mouth open, tongue out. He also loves to pull our bath towels down and hide underneath them! He has a little meow that becomes quite loud in the early morning hours when he decides its time to eat. His favorite spots are a wool bin on our boot bench at the back door, in a tunnel on the floor made by the overhang of a blanket along the edge of our platform bed and on our guest bed wedged against a pillow. 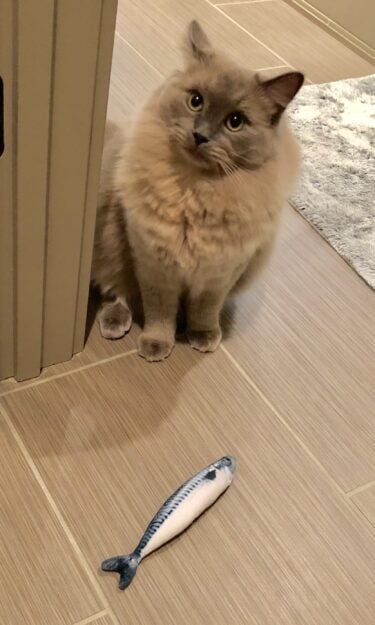 Both of our guys love to play with cat crazies, their fish, particularly the sardine, whom we named minnow and the turbo scratcher.In the warmer months, both guys LOVE to be outside on our screened in deck. They chase anything with wings through the screen, nap in the sun and investigate. By accident we found that both Linus and Sid do not like very deep vocal sounds. We were playing around with them and I said something in a funny deep voice and both guys immediately got real low to the ground, eyes dilated and bolted from the room. It is quite funny, but we try to avoid making them too scared. 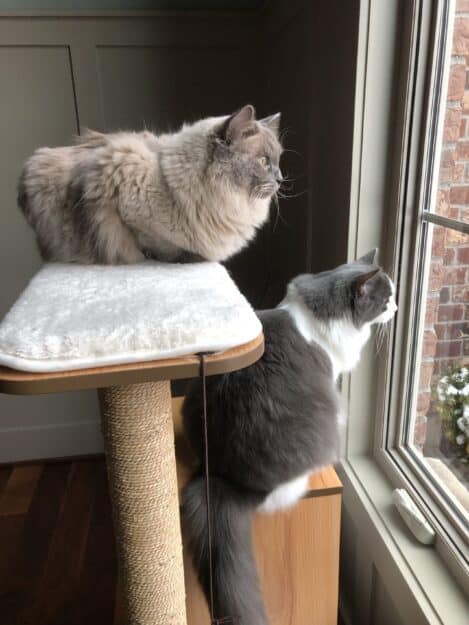 Sidney and Linus on perch

We watch a lot of movies and find that the guys like to start off watching, but then wander off. When we watched Isle of Dogs a couple of months ago, Linus literally watched the entire movie, riveted. It was amazing. He was mesmerized and I spent a good portion of the movie watching him, watching the movie. 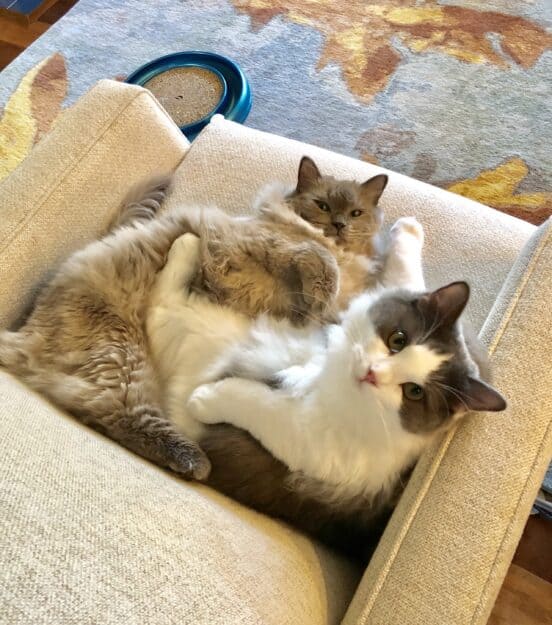 We have never had cats that greet us at the door upon our return, ready to inspect anything we may have in our hands. Although neither guy is a lap cat yet, they are never too far from us. Be careful walking because you will often find one or both winding between your feet and laying down with no warning! 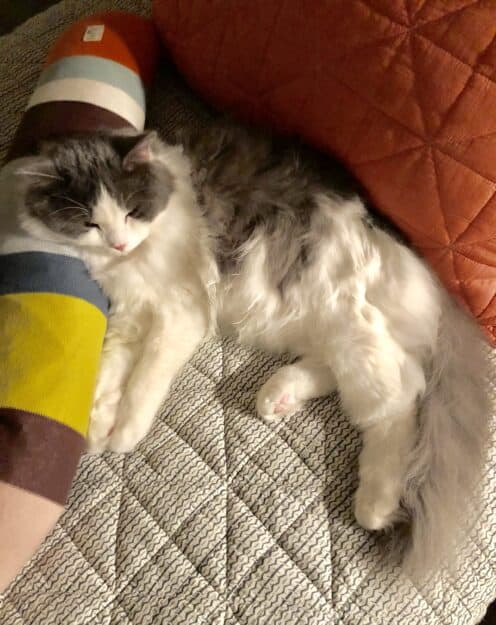