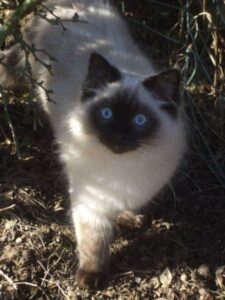 This is Shadow, a seal colour point Ragdoll Kitten.

Shadow's owner, Michelle Mitchell, writes, "Back in November I visited a friend who has two beautiful birman cats’s that are very friendly and playful which made me interested to get a kitten so I would not have to steal hers. I started to look at cat breeds when I came across the ragdoll breed which I had never heard about before so I went online and started to read a little more into ragdolls. The ragdoll personality was perfect.

I then started looking up breeders in Scotland which was quite hard but finally found one breeder I wanted to visit as her ragdoll had just had a litter of kittens. So the next day I phoned the breeder to arrange to see them and went up that day. That’s when Shadow jumped out the only boy in the litter who was right up at the cage with his sisters behind him meowing. Marlene the breeder picked him up and said they all had there first jag and would I like to hold any of them. I asked to see the only boy of the group as when his huge blue eyes looked me it was like love at first sight. We played together with a toy mouse for age’s, he was so playful and relaxed that’s when I told her he was the one I chosen. The breeder webpage is http://www.vonvardacats.co.uk 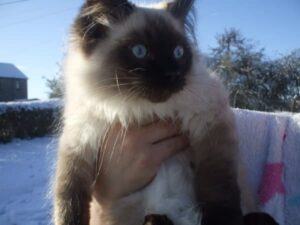 Shadow had a dark brown going through his fur along his back to his tail which made me think of the name shadow plus he followed me around like my shadow which was cute.

On 23 dec 2009 we picked him up, It was so exciting to be able to take shadow home as it felt like forever since i first saw him. When we finally got home I made sure shadow was very relaxed by making sure the house was very quiet and let him wonder around at his own time but all he did was sleep on my pillow. The next morning shadow was like a kid in a sweetie shop jumping around playing which was very funny and made me feel happy he settled in so well.

Shadow is now nearly 5 months on 1st march and his favourite toy is a bit of tinfoil made into a ball he goes crazy over them."

Here are some videos of Shadow:

If you have you a Ragdoll who you would like to feature in our Ragdoll of the Week series, please feel free to contact us.  Here are the guidelines of what to include.