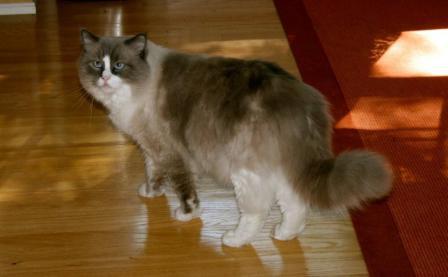 Having 2 Ragdolls already, one age 12 years (Samantha) and one 9 months (Savanna), I was looking for another young cat to be a playmate for Savanna because Samantha was just too old to be interested in playing as much as a kitten wanted to.

Surprise, surprise when one day I found a posting on Craig's List from someone locally that was GIVING a Ragdoll away 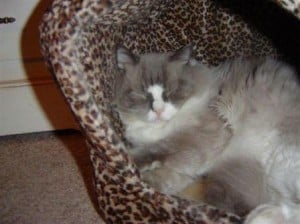 because they were moving to Florida and didn't want to take it with them. The posting described the cat as a "special needs" cat. I exchanged contact info with the lady and she called me. She advised the cat was a very nervous cat and not very social, and, additionally, was a hermaphrodite. The story went that a friend of hers was a Ragdoll breeder and this cat was in one of her litters. When she took that litter to the vet for the first round of shots, the breeder was advised of the "condition". Knowing that she couldn't really sell the kitten as a bonafide Ragdoll, she gave it to her friend that is now moving to Florida. The cat was given no further shots.

I have no idea how the cat was treated, but I do know 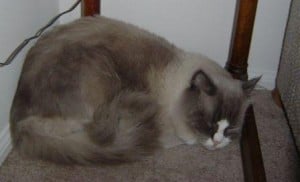 that the cat was literally quivering when I went to meet it before agreeing to take it. I have never seen it quivering like that since I've taken it in, but he is totally non-social. He (I've named him Sebastian, therefore refer to it as "he") does NOTHING but stay in a corner or a closet or an enclosed fabric cathouse/bed or even in the back of the cabinet under my kitchen sink. No catbox issues and he does eat, but very little. At just over 2 years old, I would think he would do SOME running around, but he doesn't.

I brought him to my vet and he was given a clean bill of health and his teeth and eyes appear to confirm that he's in the area of 2 to 2 1/2 years old. My vet had never seen a hermaphrodite and actually took photos for reference. He advised that both penis and testicles are 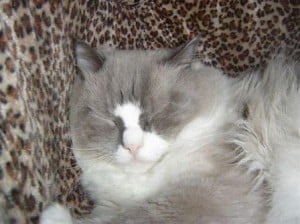 outside of the body, and the vulva is there too. He couldn't tell which organ was used for urinating, though. The previous owner never spayed OR neutered this cat and I've found some conflicting information on line as to which procedure or if either procedure should be done.

It appears that the cat had no socialization when a kitten at all and I don't know if he was mistreated at all, but he will just stay in one corner and will not even use the litter box or eat until the middle of the night when there's no activity going on in the house. I can reach him and pet him and he will now purr for me, but will hiss as my hand is moving towards him. Once I begin petting him, he now begins to purr fairly soon but if I pull him out and try to hold him on my lap, he squirms until I let him down. He is totally non-aggressive though and has never extended any claws to me.

Are there any thoughts out there on socializing this cat? Does anyone have any experience with a hermaphrodite? Are there any special needs? To neuter or not to neuter?? Spay, too?? I know male cats tend to smell and spray and assume that's one reason to do the neutering.

Any input would be appreciated to help me help Sebastian enjoy his new home.