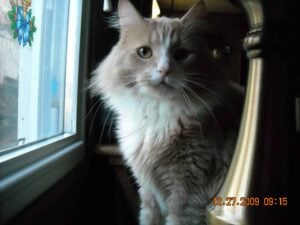 My Sam is a Ragdoll (or Ragamuffin).  He is now 7 years old and he is the love of my life, I have had him since the day he was born.  Believe it or not he is one of 18 cats I had at one time in my life.  But I lost my home and had to find homes for 14, but Sam (my boyfriend named him) was my choice to take to my new apartment, since I was only allowed one cat.  His father was a huge outside cat.  I just got lucky that I had to pay nothing for him.  He is so smart, he is like a dog in so many ways.  If my alarm goes off in the morning and I do not wake up, he is right there clawing my hand to wake up.  At night he sleeps under the covers with me, until I start tossing and turning.  He wants his breakfast and dinner at the same time every day like clockwork. 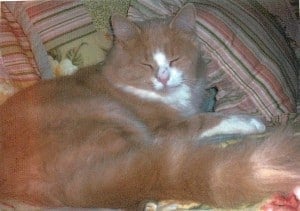 His coat is like a rabbit, so soft and silky.  His whiskers are long and his tail is so fluffy. He is very well mannered and he doesn’t like to be dirty or wet.  When he was a year old he got outside and he sometimes would come back hurt from fighting with other males over the females.  One time on a very cold winter night he took off and he was gone for three days. He came back with a big gouge on his paw.  That was it, I made the appointment to get him fixed.  Now he is an indoor cat and has all kind of toys, his window seats, his outside veranda to sit and lie out in the sun and get some fresh air.  He also has his cat tree with his scratching posts.

When I talk to him, he knows what I mean, every word.  Every night, he comes downstairs to get me at 10:00 to come to bed.  Like I said he wakes me up every morning and on the weekends he lays by my side in my 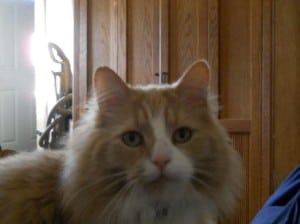 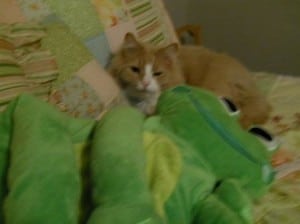 I am very mad that I had to give away the other cats that I had, I cried and cried.  But now I know that my choice to keep Sam was a good one and that I wouldn’t know what to do without him.  When I am sick he lies by me, trying to get me up by clawing me and meowing, he doesn’t understand why I am in bed when I should be at work.  These cats are the best and I have had many cats in 40 years.   I would just die without him.  When they say cats love repetition, it’s true, they do.  Today he is out on his veranda, watching the other kitty’s outside.  When the weather is nice out, I put a little jacket on him with a leash and when I say outside, he lies down so I can put his jacket on and then the leash and we waits at the door until I open it.  He gets to go out and eat the grass and lie out in the sun.  We only go in the backyard and only for a while, but this makes him so happy.  I didn’t like the idea at first, but anything to make Sam happy.  Because Sam, you see makes me very happy.  I love my Sam and if anything happens to him (God Forbid), I am going to get another Ragamuffin for sure. 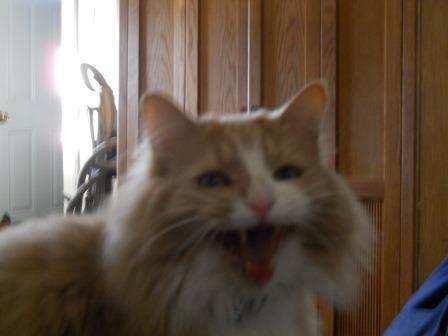 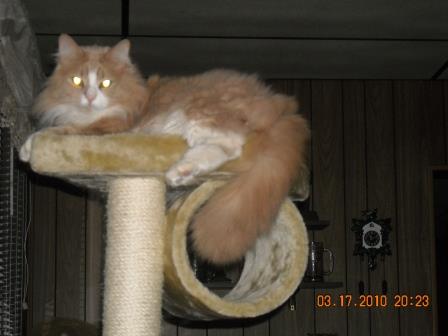