Roxie - A Blue Mitted with a Blaze Ragdoll Kitten in Charlotte, NC.

My name is Laura Stoner and I am from Charlotte, NC. I would like my kitten “Roxie” to be featured as the “Ragdoll Kitten of the Month”. First let me begin with my involvement and interest in Ragdolls. When I was 7 years old my mother purchased “Toonces”( yes like the driving cat from SNL) from a breeder back in 1989 when the breed was fairly new. 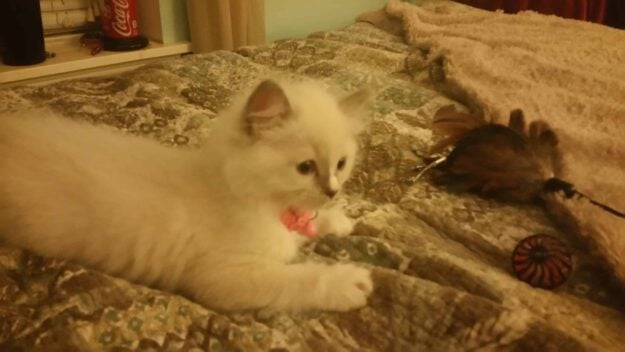 Toonces was a smart, sweet, and beautiful cat. He lived to be 21 years old and we grew up together. My love for his sweet, laid back, and great health made me want to get another after losing my Himalayan back in June. Her death crushed me not having someone greeting me at the door. 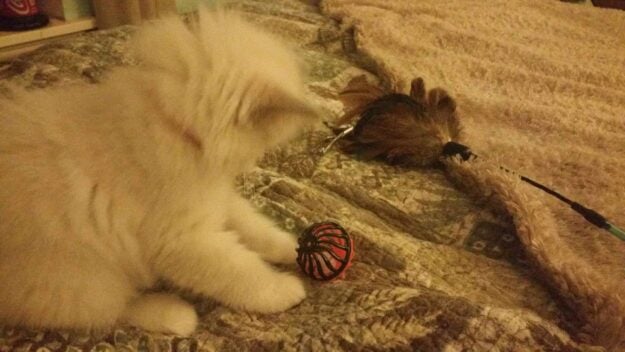 I searched the shelters around my area but had no such luck. I then came across an article in the Charlotte Observer Newspaper a few months later and it seemed as if the angels knew I needed a new furry companion. The ad was from a breeder named Shirlene out of Troutman, NC. She was very friendly and I would definitely recommend her. I called and she said she just had two litters giving me many options to pick from. I visited her home to get the characteristics of the kittens she had left from the first of the two litters that were available. 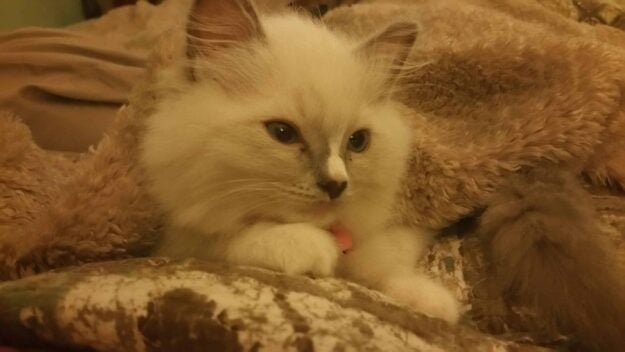 I had my heart set out on a girl and she had one little angel left. It was love at first sight. I put her down on the floor and she had so much energy, fearlessness and poise. Roxie also had two brothers that needed a home. I saw a little handsome baby boy look up at me and thought I would give him a chance. He was as energetic as her and once Roxie was put back into the cage she leaped off the top of the three shelves and grabbed onto the cage as if she was saying “ Pick Me not him”. I said “well let’s get them out together” and when I saw the two of them together I knew it would be a tough decision to pick between the two. 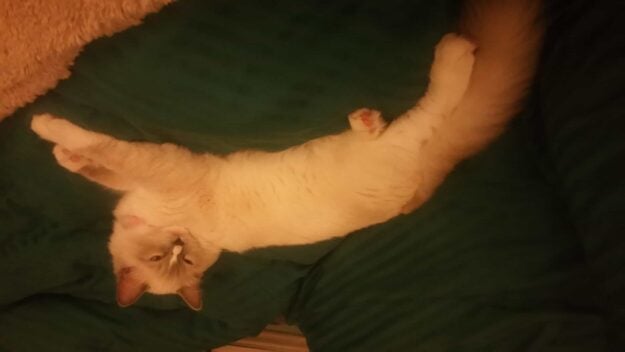 Needless to say I picked my baby girl Roxie. What caught my eye with Roxie and which is also why I believe she would be a great kitten of the week was her little white button nose and mitts and needless to say her charisma. I took her home with me that day at 8 weeks old and she became my new fearless, loyal, and loving best friend. I got her name “Roxie” from the movie Chicago and also had a great-great grandmother by the same name. I knew it had to be a strong female name. I even took suggestions at work because I wanted to see what name would fit before making it official. Roxie is now six months old today. Roxie was born 08/15/16. 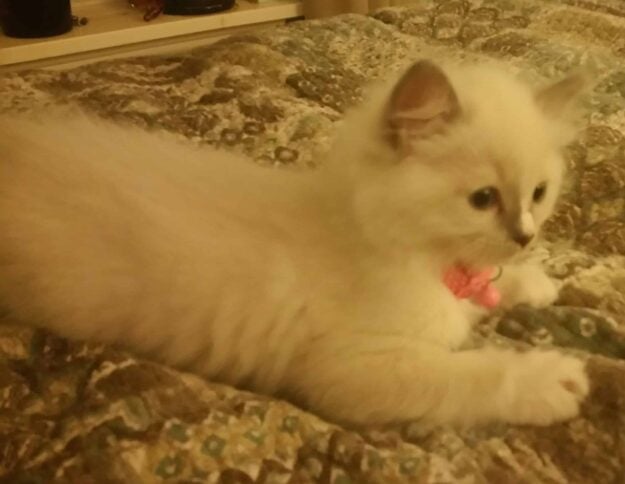 She is growing up so fast but Roxie will always be my baby girl. Roxie enjoys climbing, playing with shoe strings, but playing peek-a-boo is her favorite game. She also loves exploring and her biggest talent is her ability to jump almost as if she was flying through the air. Roxie is on my YouTube Channel. Her most viewed video is her hilarious reaction to her reflection in the mirror which I will always have to look back upon.I do have to admit I did get her brother as well but more to come on him in my next submission. I would highly recommend “Hot Pursuit”, “Da Bird” and you can never have enough balls to get lost under your furniture..LoL. So I would like to enter Roxie as the “Kitten of the Month” because she an outstanding, fearless, entertaining, and most importantly loving companion to me.Do you have a Ragdoll Kitten or Cat?  Consider submitting your kitty!  Ragdoll of the Week submission guidelinesRead more Ragdoll Kitten of the Month submissions.