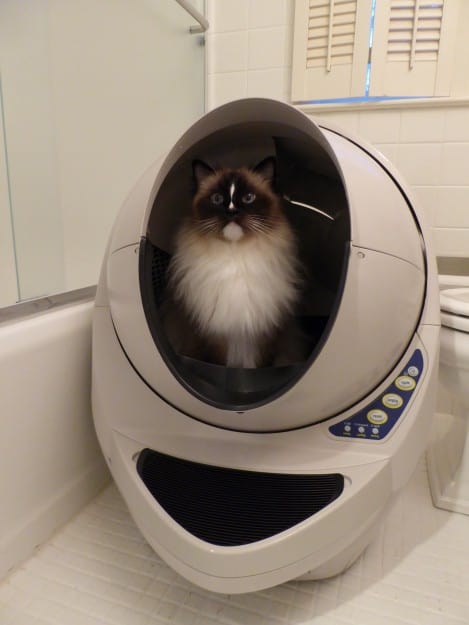 Meet a monster of a litter box.  Meet the self scooping Litter-Robot 3 Open Air litter box.

UPDATE - November 2019 - When we reviewed this litterbox, it was called the Litter-Robot Open Air, now it is known as the Litter-Robot 3.  It is the same machine being sold today, just a different name and no shield on the inside like there was for us.

We still have this litterbox, but have removed the shield.  You can see my most recent YouTube video that features this LR3 that appeared in this review.  I have not altered the review.  My brother's cat (this will be explained below) would not take to it - because I think it smelled like my cats - so I brought it back home.

The Litter-Robot III Open Air Automatic Litter Box is a self-cleaning litter box that is very sophisticated.  It has a self-adjusting weight sensor that knows when your cat is inside using it (so you don't have to worry about it cycling when your kitty is inside of the litter box).

After each use, a timer counts down until it cycles, which is great because it allows the kitty to be way finished with their business before it cycles.  It is also good for clumping litter, so that the clump has time to set. After that, the sifting system cycles automatically and dumps the clumps and waste into a drawer below.

Once the drawer is full of waste, an indicator light lets you know that it's time to empty it. Someone was thinking when they designed this puppy. It's made in the USA and comes with a 90-Day Money-Back Guarantee and 18-Month warranty.

As an aside - in one of our recent newsletters, I asked readers if they had an automated litter box and one of our readers had the Open-Air and wrote a detailed testimonial about her experience.  She let me post it on the site here.

Quick Litter Robot Open Air Review Run-Down (for those who are short on time):

Now for my experience with this beast.  This thing is a beast - it's huge.  But it makes sense why it is huge - so that your kitty will fit and that it'll rotate.  I call it, "The Spaceship", mostly because of it's appearance, but also because it's out of this world.

I have never wanted an automated litter box.  When Auto-Pets, the maker of the Litter-Robot III Open Air Automatic Litter Box, asked if I would be interested in reviewing their newest creation, I was interested, but also bluntly honest that I would not remove any of my current litter boxes to force my cats to use this one, nor would I ever buy one myself.

I had seen it at Super Zoo in Vegas this past summer and watched it in action.  It seemed "cool" and huge - but I knew very little about automated litter boxes, as I had never had the need for one.

But, I fell in love with this thing. 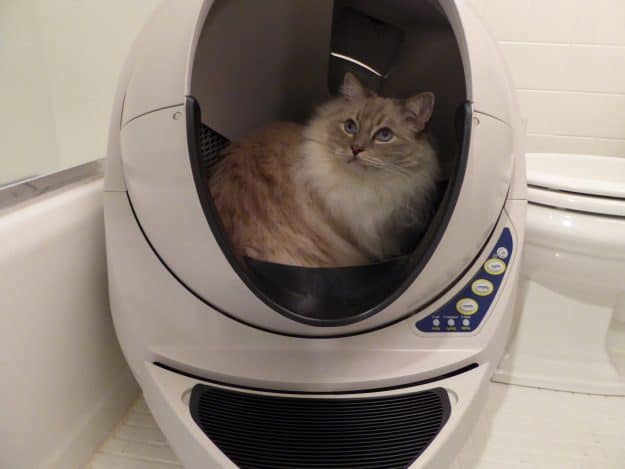 I had such a bad attitude going into it, thinking things like, "This is ridiculous - why are people so lazy that they can't scoop poop?" - however, as you can listen to in my final review video, I serendipitously met people that would need such a litter box.

Like a firefighter who can be gone for 48 hour shifts and wants his cat to have a clean place to go the bathroom, etc.  My brother does not like to scoop litterboxes, and I realized that this automatic litter box would be a beneficial tool in his home for his cat and for him.  Or think about pregnant women who are not supposed to scoop litterboxes - this could be ideal for that.

But, I love that it is always clean!  It's like seeing something cleaned up and you didn't have to do it - woot, woot.  So even someone like me that doesn't mine scooping but likes things clean, can appreciate this automated litter dome. 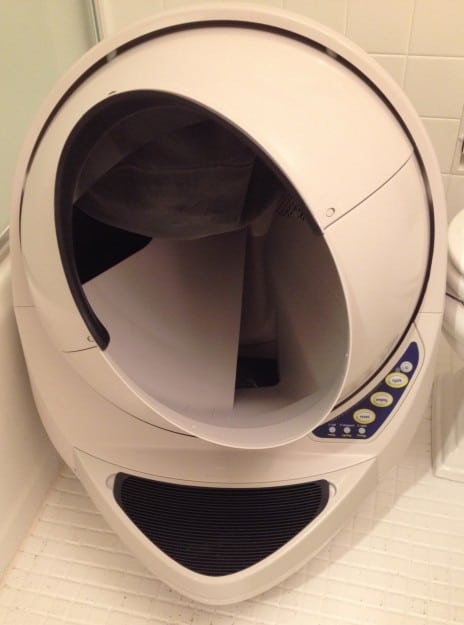 We did have a problem with it - well, two problems.  The first one was that one of the cat's pee clumps was too big and fell in a spot that wouldn't allow it to drop to the drawer below.  However, after 2 more cycles, it finally did.   And the other problem was that I overfilled the amount of litter on the inside, causing it to get stuck in cycle mode (see photo to the right) - and therefore I had to do some troubleshooting with the Litter Robot Open Air not cycling.

I did not know that could happen - but was pleased it did.  I had to call Litter-Robot's customer service to troubleshoot what the problem was.  There is a litter fill line inside of the dome that shows you were to stop filling the litter.  But clumping litters all weigh differently, so you just have to figure out which amount is right.  For this reason, I would suggest cycling the Open Air every time you add litter to it to make sure it is not too much litter.

And because of it getting stuck in cycle mode, I would recommend ALWAYS having a regular litterbox available to your kitties.  I can't imagine being the firefighter guy, coming home after a 48-hr shift, seeing that the dome stopped, so his cat had no where else to go.  It's just better to be safe and have that regular litter box around.

As far as the amount of litter that is allowed - when I saw it in Vegas, I thought the litter level was ridiculous and definitely not enough - however, the litter amount was never a problem (I am humbled by my bad thoughts!). 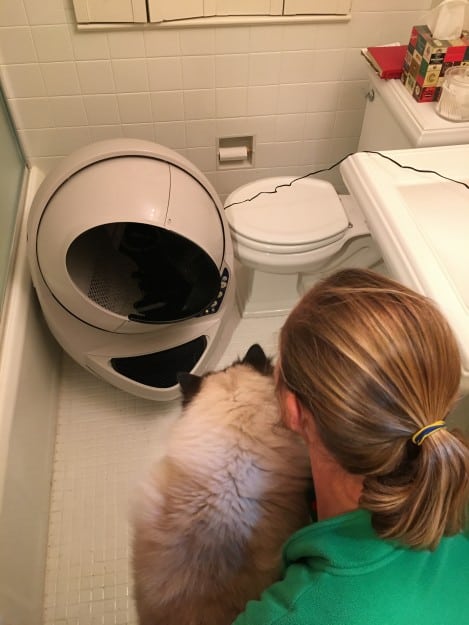 They used it first for peeing - and then finally started going number 2 in it.  I don't know about you, but I have to have an entirely different level of comfort to go #2, so I saw the fact that they pooped inside of it as a really good sign - especially since we have 5 litter boxes in the house and this was the 6th.  In other words, they always have plenty of options, but chose the Spaceship to go in.  Hey, who wouldn't want to go the bathroom in a Spaceship?

This automated self-cleaning litter box comes with an awesome instructional manual and also information with tips and tricks about how to get your kitties to use it.  I followed their suggestions - I introduced the cats to it (you can see footage of that in the arrival video below) and then filled it with litter from one of their other litterboxes (this is because the litter from one of their other boxes smells like their litterboxes - that way, they know what the Litter-Robot III Open Air is for).

Within minutes of putting the litter in it, one of them used it.  For two days, I allowed them to use it as they would any other litterbox.  After the two days, I finally plugged it in and let it cycle for the first time.  They both shot up the stairs (it's on our second floor) to see what the new noise was.  Trigg has remained being fascinated by it, whereas Charlie gave up on it's fascination after the 5th or 6th time.

Chiggy still watches the thing when it cycles and for that reason, I am sad that we aren't keeping it for him.  Our Litter-Robot III Open Air will be headed to my brother's house, so that Boots, his Tuxedo Cat, will finally have a litter box that is always clean.

A sincere thank you to Auto-Pets for allowing us to review this litter box - it really changed my tune about automated litter boxes and opened my mind to new ways of seeing things - which is something I will always have gratitude for. 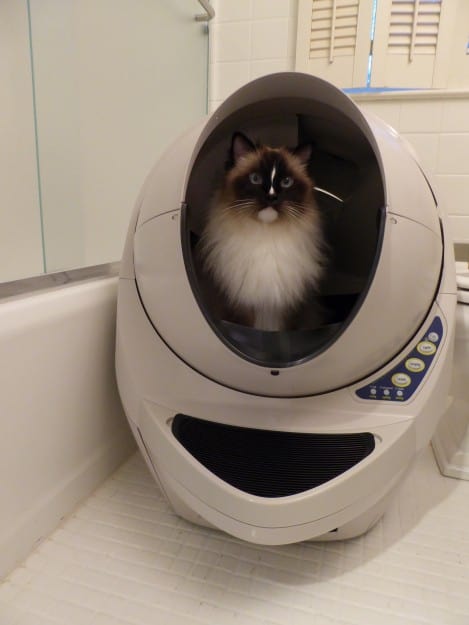 My sister's cats took to it immediately - here is the unboxing video of the Litter Robot with her kitties:

How to Clean the Litter Robot Open Air:

We received the Litter-Robot III Open Air Automatic Litter Box for review from the manufacturer and also asked that they pay a small review fee.  Receiving the free product and the review fee did not influence this honest post.