My kitties Aisling and Saoirse just turned 1, and received the PetFusion Jumbo Cat Scratcher and Lounge as a birthday gift.

I have had my eye on the PetFusion Jumbo Cat Scratcher since before my girls came home last October as fluffball kittens. We have another PetFusion product, the small size PetFusion 3 Sided Vertical Scratching Post, and it’s been a favorite. It’s still in very good shape despite regular use.

I have several scratchers in general – Aisling especially enjoys scratchers, and so I have them in pretty much every room that has other surfaces the cats might otherwise find appealing. The compressed cardboard scratchers are the favored material for my girls, and I have found quite a bit of difference in the quality of different cardboard scratchers. PetFusion is definately a high quality product, and while for any scratcher there is an expectation that replacement will be necessary over time, PetFusion is especially well made. The cardboard is tightly compressed and very strong. 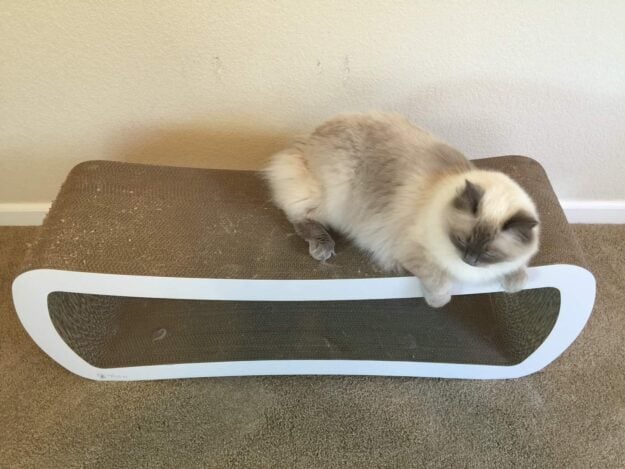 I Wanted a Large Scratcher My primary reason for wanting the Jumbo Cat Scratcher is that now that my cats are older and bigger, I wanted a large scratcher. Given how they spend time and play together, I liked the two levels on this product and could imagine how much they would enjoy that and use it. I thought an infinity scratcher might be a bit too small to really use the interior spaces, and a single level lounge might not be too interesting to the girls as a scratcher. I have a few flat cardboard scratch lounges, and while the cats sit on them often, they don’t really scratch on them. I wanted something that could be both.

It came in a HUGE box (bonus for kids!) and inside that it was in another box, and was industrially shrink wrapped – it arrive in perfect condition. It’s large and substantial but not heavy. While my cats aren’t huge (about 8 pounds and 11 pounds at 1 year old) they definitely are liking bigger spaces to stretch out on. From the moment I opened it, the cats were all over it. I have never needed the included catnip to attract the cats to cardboard scratchers!

I initially set it up in the middle of the room, and there was initial investigation and exploratory scratching and sniffing. A little while later, I moved it under a window, and that was a huge hit. While my windows have ledges generous enough for the cats to sit on, they really love being on the lounge while they survey the outdoors. They also love perching their back legs on the lounge and front legs on the window ledge when they’re at alert. Under the window, it’s pushed against a wall, creating a little cave-like space underneath – and this is also very popular. Saoirse, my smaller and more high string cat spends a lot of time on and around this scratcher, it has become her absolute favorite place. she is completely content and relaxes while using it, luxuriating in the big area to stretch out and be generally adorable. My other cat, Saoirse (they are sisters) also enjoys it, especially to look out at the world from. She’s less scratch-oriented, but really enjoys it as a lounge. The girls haven’t spend a lot of time using the 2 level simultaneously yet – I am curious if they will over time. 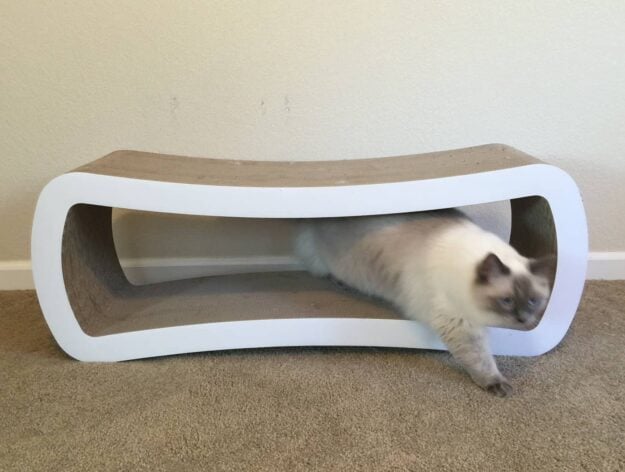 The lounge will move around on hard floors (I have tile) if the cats really take a flying leap from it or during a big game of chase, but for general use/scratching, it’s big enough it largely stays in place. On carpet, it doesn’t move. It is very stable which I think contributes to Saoirse feels safe on it or in it. It feels substantial. 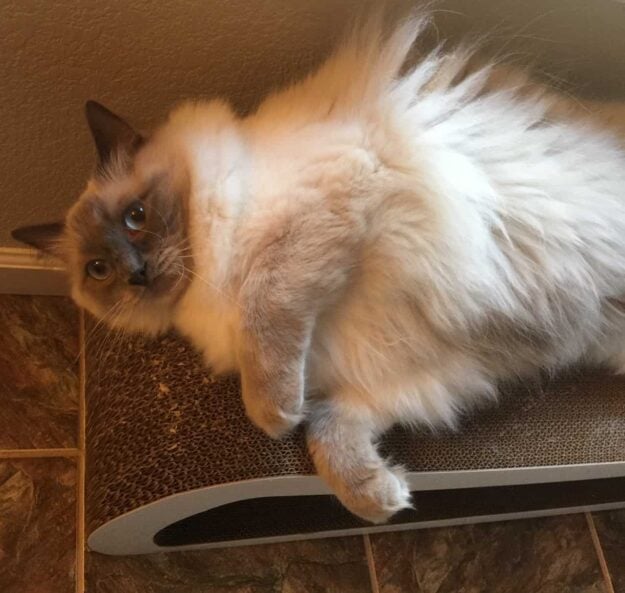 I think it’s really attractive especially, as “cat furniture.” I have gotten several compliments on it. The white sides give is a nice touch of refinement elevating it from just another scratcher. While certainly not inexpensive, I have learned that quality does make a big difference for cardboard scratchers. I have had to replace a number of less expensive scratchers after just a few months, and I absolutely have to spend more time cleaning up after some cardboard scratchers. I suspect this one will still be in good shape for some time to come. 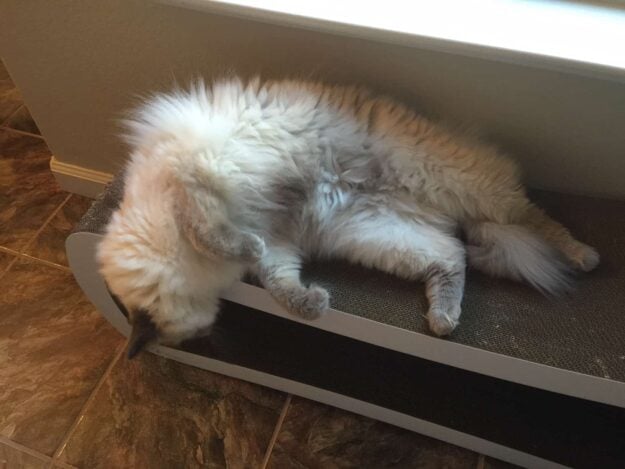 It was an excellent birthday surprise for the girls, and they have used and enjoyed it every day since. 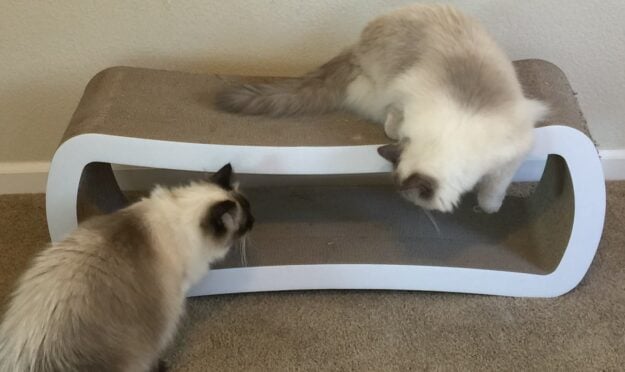 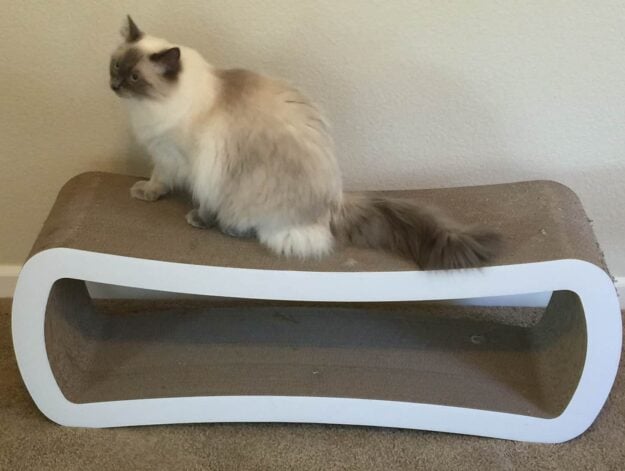 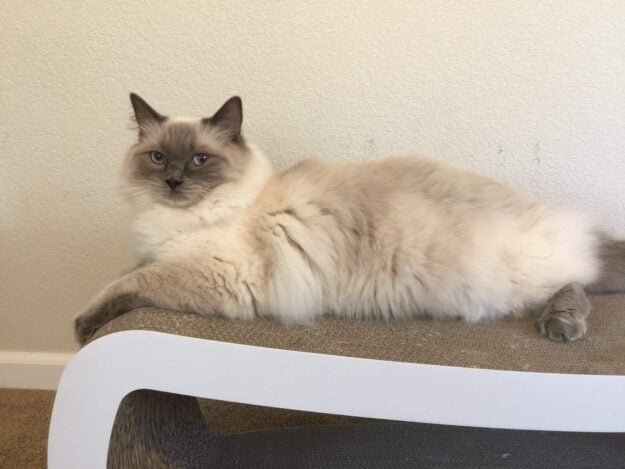 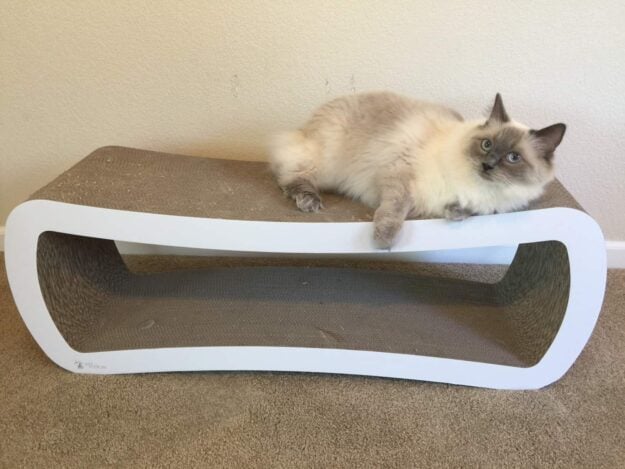 Do you have a PetFusion Jumbo Cat Scratcher Lounge?  How do you like it?