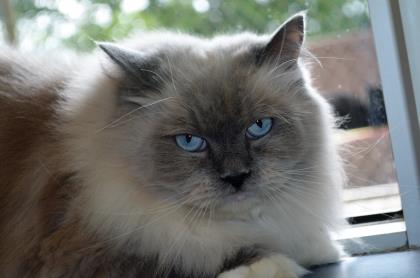 Two weeks ago, I saw photos of two Ragdolls on a semi-local shelter's Petfinder page. I had been looking for a cat or kitten to adopt, but I just wasn't able to bond with any that I had met in shelters or pounds up to that point. I've always been very close to our family cat, Zo (DMH/Russian Blue Mix), and I just couldn't find a pet of my own that I bonded with as quickly as I bonded with Zo. Well... this is the story of how I met my Rajah Bear -- the Raggie who stole my heart!

I have considered purchasing a Ragdoll kitten or retired adult cat for about about 5-6 years now, but I never could justify spending the money when so many cats are homeless in shelters. I'm drawn to the cuddly and calm nature of Ragdolls, and I absolutely adore medium/long haired cats. So I looked for rescue Ragdolls online, but quickly realized that I would have to travel quite a long way to make that work. I had ALMOST given up at this point. 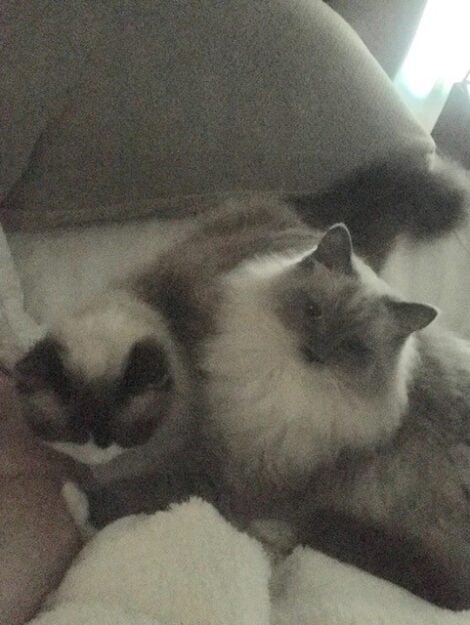 I was browsing Petfinder on Thursday, May 18th, at work when I randomly stumbled across two pure bred Ragdolls who had been surrendered to a semi-local pound by a breeder who claimed to be "downsizing" her Ragdolls. As soon as I saw their photos online, I felt such a strong desire to meet them! I immediately called the shelter and asked about them. I filled out an application and was called about an hour later with an approval! I left work (yes, I definitely bolted from work to meet these babies), and drove two hours to the shelter. I originally intended to adopt ONE cat... well, instead I walked in and immediately fell for BOTH of them -- one male and one female from the same litter, supposedly.

I must say that I was originally more drawn to the female. I adopted them both on the spot and came back on Saturday, May 20th, to pick them up. So I drove two hours back to the shelter that morning and took them both home... just like that! All of a sudden, I found myself the owner of two, adult, purebred Raggies! My boyfriend drove us home, and I held Rajah in his carrier on my lap. Rajah was by far the more nervous of the two, so I opened the top to let him peek out. All of a sudden, he poked his fluffy little head up and looked me straight in the eye... and FELL against my chest and started purring. 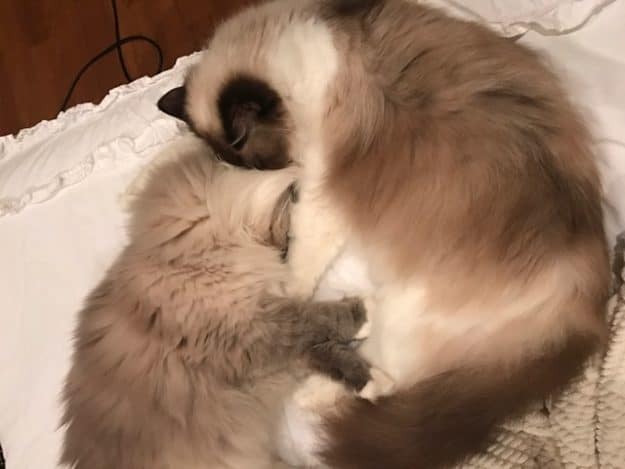 In that moment I knew I had found my little feline soulmate in Rajah. I knew what I wanted to name him instantly -- if you've seen Aladdin (Disney), you may remember the scene where Jasmine is upset and seeks comfort in Rajah (tiger). She looks at him and says, "Oh, Rajah..."

THAT is how I felt about him! My little cuddle bug. My little guy who could make everything better! 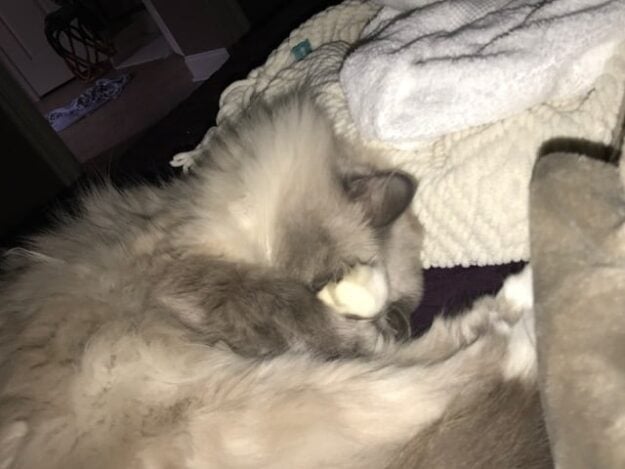 Now Rajah, as you will see, is a lilac/blue point Raggie with little white mitts. He is VERY soft (softer than his sister). He is 3 years old and is front-declawed (they both were declawed when I adopted them). I was told at the shelter that Rajah (formerly Simon) was very shy and nervous. Well... let me tell you 'bout the REAL Rajah.
He is an absolute cuddle bug. I call him Bear sometimes, because he's like a living teddy bear. He loves to curl up with his sister (and me) and sleep next to us all night long. 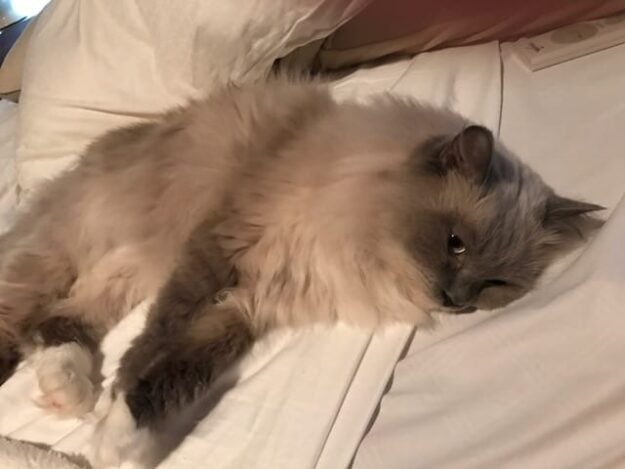 Here are a few extra facts about my Rajah Bear:

1) He meows slightly off-tune.
2) He LOVES Greenies hairball control treats in the Tuna flavor (blue bag).
3) He likes food in general, but seems to prefer his Wellness wet food. He particularly enjoys lamb.
4) Rajah likes to play with zippers dangling from the bottom of jackets.
5) He puffs his chest out when he sits, which leads me to call him Silver Lion on occasion.
6) He LOVES his sister. I am SO thankful that they were not separated.
7) He likes to carry around his PetLinks duck (with feathers and curled ribbon) and randomly shake and toss it into the air. If he sees me or his sister coming toward him, he WILL seek cover immediately so that he can hide his ducky. This is very important... the location of the ducky is secret at all times and must not be compromised!
8) He has the most beautiful, light blue eyes I have ever seen.

I have included some photos of Rajah. His sister may appear in one or two -- sometimes it is impossible to photograph one without the other. I hope you've enjoyed my story. I hope to post a story about Rajah's sister soon, but she is still coming out of her shell and is not quite ready to be featured just yet. 🙂